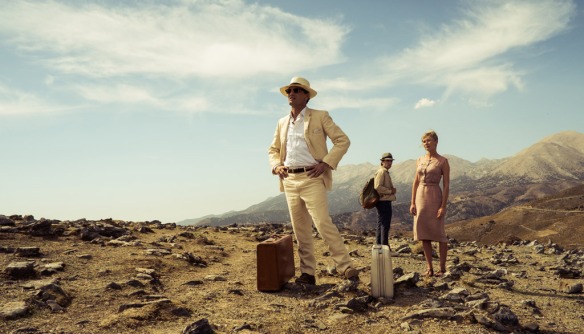 The Crete airport has a pretty out-of-the-way lost luggage location.

In Tom Ripley, novelist Patricia Highsmith created a character whose moral compass pointed straight at himself; Ripley remains fascinating in the imagination not just because of his ability to become a chameleon but because he takes acting in his own self-interest to the ultimate.

While Ripley doesn’t appear in the latest film adaptation of a Highsmith novel, his ghost is hanging around the fringes of the themes here. Things start out pleasantly enough; Chester MacFarland (Mortensen) and his stunning wife Colette (Dunst) are vacationing in Greece in the summer of 1962. They wander around the Acropolis relying on Greek guidebooks that may or may not be terribly useful when they come upon an American named Rydal (Isaac) who is a tour guide who speaks fluent Greek. He’s also a bit of a hustler, although Colette doesn’t realize it. Chester however, wouldn’t trust the guy to mow his lawn although he does humor his wife and allows her to hire him to guide them the next day.

They spend a pleasant day together and if his eyes linger on the beautiful young Colette a little bit too much and if she is a bit too taken by him, it seems to be harmless. However, Chester is far from the innocent that his summer white suit would indicate. He left behind a mess back in the States of fraud and larceny which catches up with him in his five star hotel room that night. When that ends badly, it is inadvertently witnessed by Rydal who helps Chester clean up a literal mess. It becomes necessary for Chester and Colette to make a hasty getaway but they are unable to pick up their passports from the hotel, without which they can’t leave the country.

Rydal takes the couple to Crete where they can hide out. The ex-pat knows a guy who can forge some documents and while they wait for the passports to arrive, they try as best they can to lay low but once again things don’t go according to plan. Now paranoia and suspicion rule the day and getting out of Crete won’t necessarily be the end to their problems.

Amini, who earned his Hollywood stripes as a writer, chooses a writer’s writer to adapt for his first feature as a director and does a credible job for a debut. He sticks to a basic visual style, relying on his cinematographer Marcel Zyskind to bring the Greek and Cretan landscapes to life. The charming villages, the urban ruins of Athens, the desolate landscape of Crete all play a role in the action.

It doesn’t hurt that each of these lead characters are essentially flawed and make morally-challenged decisions, and yet we still root for them and identify with them. In a sense, there are no villains here; each character is his or her own villain. If there is a villain, it’s Lady Luck; if it wasn’t for bad luck, poor Chester wouldn’t have any luck at all.

Mortensen has ended to choose obscure roles after his breakout performances in the Lord of the Rings trilogy; I had predicted big stardom for him at the time but Mortensen hasn’t really taken roles that would further his profile, preferring to stick to small budget indies and lower profile films with roles that interested him. More power to him. Dunst has taken a similar career path, with only the Sam Raimi Spider-Man trilogy having that kind of major star profile. She has since taken meatier roles like this one. Isaac, on the other hand, is an emerging star who is about to embark on a major franchise of his own, the new Star Wars trilogy. I wouldn’t be surprised though if he stayed the same course that Mortensen and Dunst have taken on.

Highsmith doesn’t exactly write empty-headed upbeat novels so don’t go into this looking to escape. It requires a certain amount of brain power and a willingness to accept behaviors you might not ordinarily approve of; these are after all desperate people far from home and if you understand that, you’ll understand why they act the way they do.

There are some twists and turns, not all predictable. However I must admit that the movie seems to slowly lose steam during the last third and maybe it’s the somnolent atmosphere of a sleepy small town in Crete or the hard-baked prairies of the center of that island. It just doesn’t bustle with energy is what I’m saying.

This is a much better than average thriller, although maybe not as gritty as noir lovers might like, nor as fast-paced as the average thriller junkie might be comfortable with and yet this is one worth seeing if you get the chance, which Central Florida filmgoers can if they hurry.

REASONS TO GO: Terrific triumvirate, every one likable. Gorgeous Greek scenery.
REASONS TO STAY: Loses momentum over the third act.
FAMILY VALUES: There is some violence (none of it bloody), some sexuality, a bit of foul language and plenty of smoking.
TRIVIAL PURSUIT: This is the directorial debut of Amini who is best known as a writer for such diverse films as Killshot, Drive and Snow White and the Huntsman.
CRITICAL MASS: As of 1/8/15: Rotten Tomatoes: 82% positive reviews. Metacritic: 66/100.
COMPARISON SHOPPING: The Third Man
FINAL RATING: 7/10
NEXT: Big Eyes