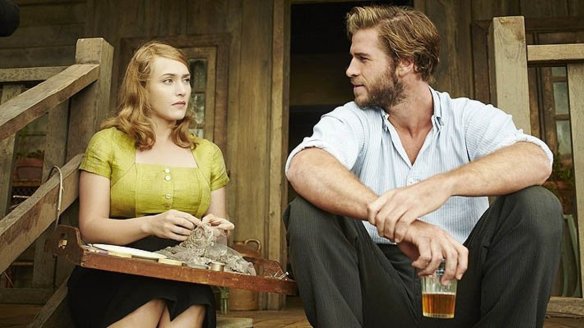 Here is a primer on sexual stereotypes.

There is an old Chinese proverb that revenge is a dish best served cold. Personally, I like my revenge hot in a spicy oyster sauce, but that’s just me. In any case, the point is that vengeance is something best left to ferment awhile.

The tiny rural Australian town of Dungatar is the kind of place where not much ever goes on. It was doubly so in 1951. That is, until Tilly Dunnage (Winslet) stepped off the bus in the dusty streets of the town. She walked over to where the town’s team was playing in a rugby match. Wearing a stylish red dress, her lips slathered in cherry red lipstick, her eyes hidden behind sunglasses and a cigarette dangling from a holder at a rakish angle, she made for a sight that the town had only glimpsed in fashion magazines.

The more so because there were whispers that she had murdered a young boy named Stewart Pettyman (Potter) and while nothing was ever proven, had led to her being exiled from the town in disgrace. Her mother Molly (Davis) went quietly mad and became something of the town codger. Most of the town has turned its back on the both of them, particularly town counselor Evan Pettyman (Bourne), Stewart’s father. However, there’s no doubt that Tilly is a talented dressmaker and when Trudy Pratt (Snook) underwent a radical transformation from Plain Jane to va-va-va-voom thanks to a makeover and a Tilly original creation, soon the ladies of the town were flocking to Tilly to get their own haute couture from the former pariah.

Also lining up to see Tilly is rugby star and neighbor Teddy McSwiney (Hemsworth) who has his eyes on Tilly but must woo Molly first in order to get her blessing. However, Tilly believes she has a cursed cloud over her head and when a new tragedy befalls her, she threatens to fall apart but her mum, realizing there’s only one thing she can do for her daughter before her own time is up, comes up with a plan to get the most delicious revenge for her daughter – and perhaps redemption for herself.

Based on a book by Betty Ham, this Aussie flick was the second highest grosser of 2015 in its native land and the eleventh all-time as of this writing. It’s received little to no fanfare here in the States and in some ways that’s not so bad; it allows you to experience the twists and the turns of the plot without expectation. Unfortunately, it’s bad in that a lot of people haven’t really heard much about this movie and it’s a shame because it’s pretty dang good.

Winslet is one of those actresses who elevates bad movies into good movies and good movies into great movies. She is a force of nature here, dominating the screen almost effortlessly. Davis, one of the most underrated actresses of her generation, holds her own and even Hemsworth, who has always been something of a pretty boy, uses his easygoing charm to his advantage. Weaving, who I’ve always enjoyed as a terrific character actor, shines here as a cross-dressing cop.

The movie lampoons our obsession with fashion as well as small town insularity, both of which have been done elsewhere but here at least are done stylishly. The problem here is that there are too many styles going on; there’s a kind of American western tone (Moorhouse herself calls the film “Clint Eastwood’s Unforgiven with a sewing machine”) as well as a kind of noir mystery (particularly near the end of the film as we find out what really happened to Stewart Pettyman) as well as an Edward Scissorhands­-esque ode to non-conformity, romantic comedy in the developing relationship between Tilly and Teddy and even a little family drama as per the relationship between Tilly and Molly.

I found myself liking the vibe here. I’ve never been what you’d call exactly fashion-conscious so I found that aspect of the film amusing. I also liked the relationships between Tilly and Molly as well as between Tilly and Teddy. The denouement of the film when Tilly takes her revenge is absolutely classic and worth all the extraneous material. You may favor the noir as I did, or the rom-com, or the offbeat stuff or some other aspect but I’m reasonably sure you’ll find something about this film to like. I know I found quite a bit.

REASONS TO GO: The acting here is extremely good, particularly from Winslet and Davis. As dramas go, this one has some pretty funny moments.
REASONS TO STAY: There are way too many undercurrents here.
FAMILY VALUES:  There is some brief violence and a smattering of profanity.
TRIVIAL PURSUIT:  This is the first film Moorhouse has directed in eight years; she has two children with autism and spends most of her time off devoted to them.
CRITICAL MASS: As of 11/1/16: Rotten Tomatoes: 54% positive reviews. Metacritic: 47/100.
COMPARISON SHOPPING: Micmacs
FINAL RATING: 7.5/10
NEXT: Audrie & Daisy