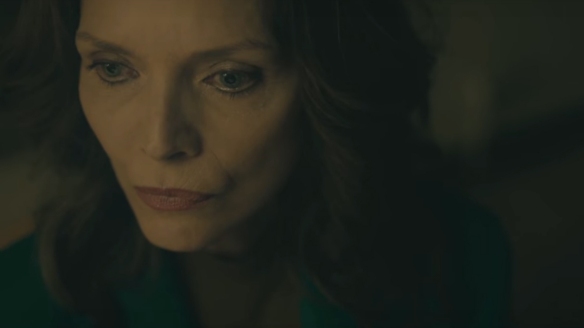 The face of Michelle Pfeiffer tells the whole story.

“There but for the grace of God go I” is a phrase we use to describe the less fortunate. It’s a particularly apt phrase; most of the time what separates us from those who are destitute is good luck or good timing. Very few of those reading this now are much more than a paycheck or two away from economic disaster.

When it comes to those of a certain age who are poverty-stricken, we have a tendency to turn away our gaze. When a child is poor, we have sympathy. When an elderly person is poor, we have myopathy. We don’t see them; we don’t react the same way. Even when they are just 60 years old or thereabouts, the attitude is more like “tough luck – you must have done something to get yourself in that predicament.” Often, that isn’t the case.

That’s how it is for Kyra (Pfeiffer). She was hit by the double whammy of divorce and a lay-off at nearly the same time. Now she lives in Brooklyn with her elderly mother Ruth (Shepherd) who has some serious health problems. Kyra runs errands for her, helps bathe and feed her and take care of Ruth’s daily necessities all the while turning in application after application for work, any kind of work. There isn’t any though, not for a woman her age (about 60). They live a meager existence on Ruth’s social security and pension.

Then even that is gone. Ruth’s health eventually fails completely and one day Kyra finds her lifeless body in the living room. There are condolences of course but Kyra doesn’t have a lot of friends and as she sits back with mounting bills she wonders what in hell she is supposed to do. She sells what she can and is able from time to time to get work handing out flyers but considering her debt it’s nowhere near enough. She does meet a guy, Doug (Sutherland) who is a driver who dreams of one day having his own cab medallion license but until then he’s driving for other people and is barely making ends meet himself.

Kyra is desperate and desperate people do things that they ordinarily wouldn’t do. She’s stuck in the position of doing whatever she as to do to survive – and takes her down a road that she never thought she’d travel.

The movie is dark in a lot of different ways; first and foremost it is a dark subject dealing with things that most of us would rather not face. As we grow older, we grow less employable and no matter how much we contributed to society and the economy in our youth, once we get to that point we are expendable, cast aside drones who have outlived our usefulness. Kyra gives the impression of being a hard work (she certainly works hard at finding work) but she is not the type of worker employers are looking for – young and willing to do more for less pay. It’s a sadly common story and one most of us choose to ignore; it’s hard to consider that sooner or later we are at that same point in our lives that Kyra is in. We will all face the same obstacles as she and that, like all unpleasant truth, is something we tend to not want to think about.

Pfeiffer has always been one of the most beautiful women in the world and she remains so; only those who have been paying attention realize what a talented actress she is – she didn’t get an Oscar nomination for nothing. Kyra is perhaps the least glamorous role she’s ever played and not uncoincidentally this is legitimately the best performance of her career. Kyra is tightly wound and so Pfeiffer uses an economy of gesture, expression and dialogue to get across her anguish, her fear, her frustration and her desperation. There aren’t a lot of histrionics except in a couple of cases. Otherwise Pfeiffer gives a spare performance relying a great deal on the silent tools that an actor utilizes. It is work worthy of Oscar attention but that is so unlikely to happen that the odds don’t bear repeating so you’ll just have to take my word for it.

The movie has the advantage of Oscar-nominated cinematographer Bradford Young but Young and Dosunmu make the odd choice of putting everything in room lighting that is dark – even the exterior shots seem to be done through a filter making everything look like late afternoon on a cloudy day. Young often frames the action through doorways and mirrors; we the audience become as Peeping Toms, observing uninvited the intimacies of Kyra’s life. The effect is unsettling and off-putting. I admire the creativity – I believe it is meant to illustrate the dreary darkness of Kyra’s life – but I question the practicality.

Also not working is the soundtrack. There is very little of it and generally what you hear is discordant and grating on the ears, like metal scraping against metal. It’s the kind of heavy metal that would make even a hardcore headbanger plug their ears. Again, one has to give props for the willingness of the filmmakers to go outside the box creatively but then one has to pay attention to the needs of the audience. Good intentions, questionable execution.

I’m giving this a mild recommendation for Pfeiffer’s extraordinary performance and the subject matter which is one Hollywood has been loath to tackle. I think if Dosunmu and company had handled this in a more straightforward manner they would have been far more effective in getting their point across. As it is they did make a movie that gives the viewer a lot to think about even if they don’t particularly want to.

REASONS TO GO: The subject matter is extremely timely. Pfeiffer delivers one of the best performances of her career.
REASONS TO STAY: The movie is so underlit that it is often hard to see what is happening onscreen. The score, such as it is, is abrasive and eventually pretentious.
FAMILY VALUES: There is profanity, adult themes and sexuality.
TRIVIAL PURSUIT: This is only the fourth time in her career that Pfeiffer has appeared as a brunette onscreen.
CRITICAL MASS: As of 4/11/18: Rotten Tomatoes: 77% positive reviews. Metacritic: 74/100
COMPARISON SHOPPING: The Pursuit of Happyness
FINAL RATING: 6.5/10
NEXT: Beirut