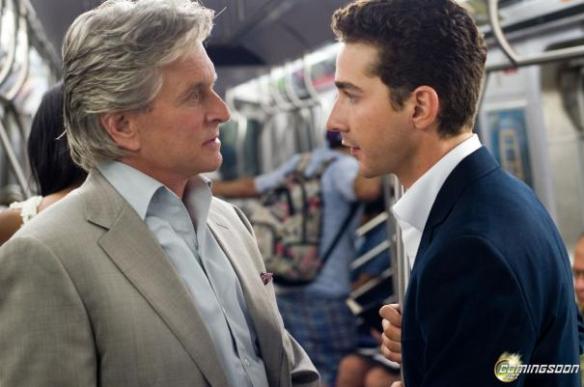 Filmmaker Oliver Stone has long had the reputation as a cinematic gadfly. Throughout the 1980s his movies took run after run against the establishment; movies like JFK, Platoon and Born on the Fourth of July all of which were Oscar bait in their time. However, many consider his 1987 film Wall Street to be his magnum opus. Michael Douglas would win an Oscar as the Machiavellian Gordon Gekko, a Wall Street financier whose mantra “Greed is Good” would become a catchphrase and, ironically enough, a spur for many of today’s brokers to enter the business. Still, that was 23 years ago; has Stone mellowed with age?

Some say yes. The movie opens with Gekko (Douglas, reprising the role from the original) being released from prison after doing eight years for insider trading. He leaves the facility with a mobile phone the size of a loaf of bread and a gold watch. There is, however, nobody to meet him; even the rapper/thug has a limo awaiting him.

Seven years later, his daughter Winnie (Mulligan) still hasn’t spoken to him in more than a decade. She blames him for the overdose death of her brother. She has a different life now anyway; she runs what is self-described as a “lefty website” and she’s living with Jake Moore (LaBeouf), who works as an investment banker for the established firm of Keller Zabel (said to be a fictional version of Bear Stearns) as an alternative energy specialist. Even though he’s essentially part of the system she despises, he’s still idealistic enough to give her reason to overlook it.

Their life is far from ideal, however. Keller Zabel is in trouble, the victim of rumors of insolvency based on bad debt (rumors which turn out to be partially true). Senior partner Louis Zabel (Langella), who is also Jake’s mentor, goes to the Federal Reserve, hat in hand, but is turned down, mainly due to the poisonous words of Bretton James (Brolin), the CEO of Churchill Schwartz (the fictional counterpart of Goldman Sachs) who had an axe to grind with Zabel.

When Keller Zabel fails, Jake decides to take in a lecture by Gekko who is promoting his book “Is Greed Good?” that, among other things, predicts the economic meltdown that would take place later that year (the movie is set in 2008). He manages to get Gekko’s ear by telling him that he’s getting ready to marry his daughter, which he is. Gekko agrees to talk to him.

Gekko agrees to get some information about who initiated the rumors about Keller Zabel in exchange for Jake helping to reunite him with his daughter. Jake arranges dinner with the three of them but Winnie walks out, unable to be in the same room with the man whom she blames for destroying her family. Jake stays in contact with her dad behind her back, however; Gekko responds by telling Jake that it was Bretton James behind the rumors that sunk Keller Zabel. Jake decides to initiate some rumors of his own. James is in turn impressed by the passion and smarts of young Jake and hires him. This lasts only as long as it takes for Jake to find out he’s being used.

Things really begin to fall apart then. Just as Winnie is beginning to move towards reconciliation with her father, Gekko reverts to his true colors and the revelation that Jake has been in contact with him behind her back threatens to submarine the relationship. Can someone like Gordon Gekko find redemption in this world, and more to the point, does he deserve it?

I asked earlier if Oliver Stone had mellowed with age, and I tend to agree with some of those who think that he has. Stone’s best works, including the original Wall Street, all carry a degree of anger to them. They are strident, opinionated and abrasive in some ways. He carries the courage of his convictions whether you agree with them or not, and in all honesty there is little ambiguity about his cinematic work.

That’s not as true here. Gekko at one point says, “I was small time compared to these crooks” referring to the Lords of Wall Street circa 2008, but he is in many ways as corrupting an influence as ever, although he isn’t even the villain of this piece – Bretton James is. While Brolin is a great actor in his own right and he does a magnificent job as the unrepentantly corrupt and greedy James, the movie could have used less of him and more of Michael Douglas.

Douglas, as I mentioned earlier, won an Oscar for the first Wall Street and it isn’t beyond the realm of possibility that he could win another for the same role 23 years on, although I would probably characterize it as more of a supporting role. Gekko is sleek, seductive and completely amoral; he is super-competitive and will pay any price in order to win on his own terms. It’s a fascinating role as much of the movie the lion has no teeth or claws, only to reveal that he had them all along about two thirds of the way through. Douglas is the reason to see this movie, first and foremost.

He has some company, however. Langella, who has been delivering terrific performances every time out of late, does so again here. His role is small but crucial, and he imbues it with dignity and honesty. Louis Zabel is a man who finds that his business has changed into something unrecognizable and something he doesn’t much like. He’s lost in this world that he helped shape, and the irony isn’t lost on him. Sarandon also has a brief role as Jake’s real estate selling mom, who is constantly in need of funds to keep her house of cards from collapsing.

This might have gotten a better rating, but unfortunately the movie is torpedoed by its ending, which I found literally preposterous. The characters turn completely on their own internal logic and act completely out of character. It’s about as jarring as ordering a pizza delivery and receiving liver and onions instead, especially if you hate liver and onions.

Having been employed by a financial institution my own self, I can tell you that the world created here is pretty much accurate; the hypocrisy and arrogance truly exists particularly the closer to the executive suite that you get. Of course, that’s pretty much true for any industry these days; it’s just that the financial industry has been in the spotlight more because of the sub-prime shenanigans.

There are a number of documentaries out there that examine the financial meltdown and its causes that are more likely to give you insight into just what happened. Wall Street: Money Never Sleeps isn’t really a good substitute for them, since it really relegates much of the reasons behind the collapse to the periphery of the film, preferring to concentrate on the characters of Jake, Winnie and Bretton and to a lesser extent, Gordon Gekko. It does make for fine entertainment, but I suspect it will seem a bit dated 23 years after the fact and doesn’t have the advantage of prescience that the original Wall Street had. It’s more a rehash of current events, and it may be fair to say that you could have gotten the same insights by watching MSNBC.

REASONS TO GO: Langella, Douglas and Brolin do some pretty impressive work. The character of Gordon Gekko is as relevant today as he was back in 1987.

REASONS TO STAY: The ending is absolutely preposterous. Some of the direction is a bit self-indulgent.

FAMILY VALUES: The language can be a little rough and some of the concepts are on the confusing side, but the average teenager should be able to follow it and maybe even appreciate it.

TRIVIAL PURSUIT: A scene in which Donald Trump made a cameo appearance as himself was left on the cutting room floor.

HOME OR THEATER: While some of the New York City vistas look far more majestic on the big screen, the movie is nonetheless perfectly adequate when seen at home.