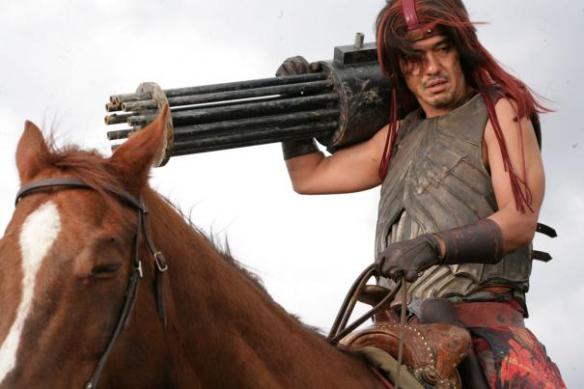 Six-shooters are for pussies.

Some movies go beyond description. Any attempt to do so is to invite failure for these movies are so innovative, so out there that no description of the plot or the film can really do it justice.

Sukiyaki Western Django is just such a film. Japanese director Miike, one of the most prolific and crazed directors of the last decade, does his take on the Italian western of Sergio Leone and his ilk and filters it through the eyes of…well, I’m not really sure.

To try and summarize the plot is pointless. Let’s just say that it is loosely based on the 1966 Sergio Corbucci movie Django but also on the Japanese historical epic novel “The Tale of Heike,” whose warring factions are used here – the Red (Heike) and the White (Genji) clans. They are both seeking a treasure in the hills of Nevada, which look suspiciously Japanese in a mining town that is entirely populated by Japanese and has a striking architectural mix of Old West saloons and pagodas.

In the middle of all this is a mysterious gunslinger (Ito) whose participation would tip the balance in favor of one clan or the other, so he is vigorously pursued by both. Tarantino shows up as a legendary gunslinger (mostly in old age make-up to the point where he’s barely recognizable) who appreciates a fine dish of sukiyaki as long as its not too sweet.

There are shoot-outs – a ton of them – and plenty of blood, with a sense of the whimsical. In the first post-prologue scene, one of the nameless thugs gets a hole blown in his stomach, and while he stares at the gaping wound in astonishment an arrow is shot through the hole to impale another thug sitting on a horse behind the first thug.

Miike has an impressive visual style and he lets it go wild here. The prologue takes place on what is obviously a set with a stylized backdrop that recalls Japanese anime as it might have been done on the backdrop of a saloon stage. Flowers give bloom to…fetuses. An eight-armed animated gunslinger turns up from time to time.

The action is frenetic. Miike wisely avoids dwelling too much on the finer points of the plot and instead concentrates on the mayhem. Now, keep in mind that twenty minutes were cut out of the Japanese version which I haven’t seen; it’s possible that there may have been more emphasis on the story there. I’m not sure I’d be able to handle it without my head exploding.

The cast, who mostly don’t speak a word of English, deliver their lines in phonetically learned English, making for odd pronunciations and emphases. Think of it as on-set dubbing; while the dialogue matches the actors mouth movements, it contributes to the overall surreality of the movie.

If I were to tell you that this would be a dangerous movie to watch while on acid, that would first off imply that I would have first-hand knowledge of acid, which I do not. Secondly, that would be as close to a one-sentence description as I can possibly come to this movie and in all likelihood the fairest and most accurate description of it. Those who love movies that are visceral and have a complete absence of intellectual properties are going to find this their kind of meal. Those who don’t like roller coaster rides on their DVD player should probably give this a miss.

WHY RENT THIS: This samurai spaghetti Western is so over-the-top that all you can do is admire it. Fans of Tarantino’s best should flock to this one.

WHY RENT SOMETHING ELSE: The plot is a bit of a mish-mash and can be hard to follow from time to time. The thick Japanese accents are nearly indecipherable for some of the cast.

FAMILY VALUES: Lots and lots of gunfights, much slow motion blood and a rape. Definitely not family viewing.

TRIVIAL PURSUIT: If you look closely at the arm of the mechanical wheelchair that Tarantino is using, the duck hood ornament from Deathproof which he directed is visible.

NOTABLE DVD EXTRAS: Mostly standard making-of stuff, except that it’s in Japanese with subtitles. In any case, any opportunity to get into the mind of Miike is well worth the visit.