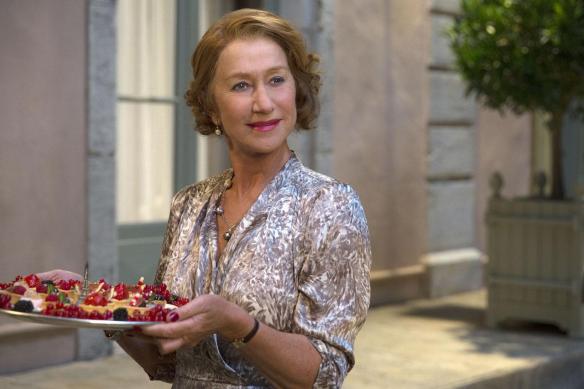 Helen Mirren serves up a treat.

Some directors have an abiding patience for place and story. They allow the tale to unfold onscreen naturally, never or at least rarely forcing the action and allowing things to happen organically, giving the film a richness that comes from life’s own richness. Few directors possess such patience and trust. Lasse Halstrom is such a director.

In a small French village (mainly Castelnau-de-Levis but also Saint-Antonin-Noble-Val, both in the Tarn region) there is a restaurant with a single Michelin star presided over by the iron-willed widow Madame Mallory (Mirren). Across the street is an abandoned and dilapidated former competitor which now stands empty. However, when an Indian family of restaurateurs, led by redoubtable patriarch Papa Kaddam (Puri) has their sketchy rented van break down in the village, she is distressed to discover that Papa has taken an interest in the vacant property and means to put in a new Indian restaurant.

At first she isn’t too impressed; after all, presidents have dined in her classical French establishment and the village may not be ready for the exotic spices, smells and sounds of the new Mumbai Maison. However, she didn’t reckon on Papa’s son Hassan (Dayal) being a tremendously talented but untrained chef. She also didn’t reckon on her sous chef Marguerite (Le Bon) falling for Hassan and lending him some books on French technique and recipes.

When the house is vandalized by French nationalists, one of whom working in her own kitchen, her attitude begins to soften a little bit. Eventually she recognizes that in Hassan she has found an amazing talent, the sort that could win her restaurant a second Michelin star. However, if she woos him away from his family and if he is as successful with her as she suspects he will be, undoubtedly world class Parisian restaurants will come calling and will Hassan be able to survive everything that goes with being a rock star chef in Paris?

Halstrom has crafted a movie in many ways not unlike his 2000 similarly-set film Chocolat in that it is about culinary talents in a bucolic French village with a romance taking place between two young people from completely different worlds. On the surface it may seem that this movie is about the preparation of food – it actually isn’t and to underscore this, about a third of the way through the movie Hassan discusses with Marguerite the mastery of five basic French sauces including Hollandaise which he asserts is made with olive oil. The sauce is actually made with egg yolks, butter, a bit of lemon juice and white pepper. Although this is a detail only a foodie or food industry professional might know, it’s the kind of detail that a movie obsessed with the preparation of food would get right.

Instead, the movie – based on a novel by Richard C. Morais – uses food as a metaphor. Meals are memories, asserts Hassan, reminding us of places and times in our lives. Good food can take us back to childhood, to magical moments of our youth, to family meals long after the family has scattered to the four winds. He’s not wrong on that score.

But whereas the mercurial and rigid Madame Malory is stuck on the same cuisine and in doing so, stuck on that single Michelin star (she dreams of being awarded a second), it isn’t until the passionate Hassan enters the picture melding French techniques and recipes with Indian spices and techniques that the restaurant flowers and approaches that lofty mark.

Mirren is one of the finest actresses in the world and any chance to see her should be taken without hesitation. However, American audiences may be less familiar with Puri who is as revered in his home country as Mirren is here, and he is one of those actors who fills every role he plays with humanity and gentle humor. He is truly a treasure.

Unlike the first two movies in our Films for Foodies series, you won’t necessarily be hungry for French or Indian food when you leave the theater, although I have to admit a nice samosa wouldn’t be a bad thing at all right about now. However, this is a movie with a great deal of heart and a story told with a gentle touch. This is a village you’ll want to live in and restaurants you’ll want to dine in and more importantly, people you’ll want to spend time with. As slices of life go, this is a particularly delectable morsel.

REASONS TO STAY: A little bit less about food than the logline would lead you to believe. A bit predictable.

FAMILY VALUES:  There is a bit of violence, a distressing scene involving a personal tragedy, mild language and some sensuality.

TRIVIAL PURSUIT: Although Dayal is of Indian descent, he was actually born in Orangeburg, South Carolina.

NEXT: Into the Storm