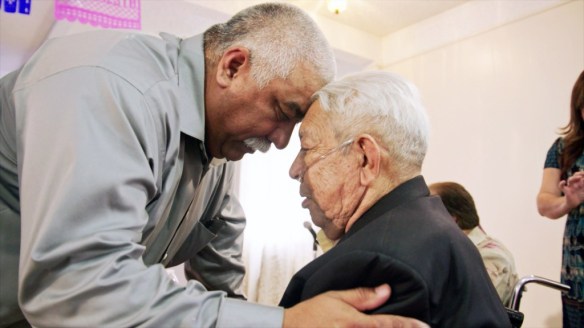 Saying goodbye doesn’t have to wait until you die.

Death is a taboo subject. We tend to shove it to the back of our minds; we don’t like to think about it and we certainly don’t like to talk about it. Our mortality makes us uncomfortable, regardless that all of us are eventually going to die. Most of us have little clue as to how we want our endgame to play.

The Baby Boomers who are of an age now where they are beginning to get visits from the Grim Reaper with regularity are changing the way we think of death and dying. While some still opt for coffins that cost as much as cars, a ceremony in a place of worship and a viewing at the local funeral home, there are other ways to say goodbye now.

This new HBO documentary revisits the way we look at the end of the road. A visit to the National Funeral Directors Association convention in Boston reveals holographic final messages from the deceased to their loved ones, elaborate urns – don’t call them urns, they’re memorial art – and boxes of good Irish soil so that the deceased may get buried at home, even if their casket is thousands of miles away.

Others may prefer having their cremated remains shot into outer space as one teacher’s family did in New Mexico. His family was one of 45 whose loved ones became part of the final frontier. Although I would imagine that would be fairly pricy, so those cost-conscious about final send-offs may want to be aware of that.

There are also things called “green burials” which Texan Barbara Jean has selected. She wants instead of a coffin to be wrapped in biodegradable material and have her decomposing remains nurture the life of a new tree. I admit there is some appeal in having your corpse be put to good use.

One of the hardest segments to watch was that involving a celebration of life. 5-year-old Garrett Matthews was diagnosed with terminal cancer. He told his mommy and daddy (Emilie and Ryan) that he didn’t want a funeral. He wanted a party complete with fireworks, bouncy houses, snow cones and an appearance by the Caped Crusader himself, Batman so after their child passed on, his parents did exactly what little Garrett wanted. Yes, it was a celebration of life but I don’t know if I could have had the emotional ability to approach it with the kind of joy they did and to be honest, one imagines there was a whole lot of tears and grief that didn’t appear on-camera.

Silicon Valley engineer Dick Shannon had terminal lung cancer and decided he wanted to decide for himself how and when to die. California’s “Death with dignity” laws enabled him to do that so Dick had a cocktail of drugs that would ease him off into the void peacefully and painlessly. Before he goes, Dick helps design (and build) his own coffin and also throws a farewell bash with a hefty amount of gallows humor.

We are shown Dick drinking his hemlock and sharing his final moments with his wife and family and that was a little uncomfortable, like we were invading the privacy of the family at a particularly painful time. I suppose we are conditioned to think that way.

The option that I’d go for was the first one presented; having your ashes mixed with concrete and made part of a Memorial Coral Reef. Considering the harm we’ve done to the ocean, it feels like the least we can do. Again, though, that one might be pricier than some of the other options presented here.

Some of this might seem a little new age-y to you (certainly the green burial had some elements of that) which might detract from the merits of the various options here, so try to keep an open mind. As Dick Shannon accurately says, the dying in America have no part of their own process of dying. They are removed from it to a large degree. Obviously those who die suddenly may not have time to consider what they want for their end of life choices, but it behooves most of us no matter how young we are to have at least some idea of how we want our families to handle our final arrangements. And death doesn’t necessarily have to be more about those left behind; I must admit I take some comfort in that.

REASONS TO SEE: Presents different viewpoints on death and how to deal with it.
REASONS TO AVOID: Some might find this a little too new age-y.
FAMILY VALUES: The matter-of-fact approach to death and dying may be too intense for the sensitive and the immature.
TRIVIAL PURSUIT: In 2018, more people opted for cremation than for traditional funerals in America for the first time ever.
BEYOND THE THEATER: HBO Go
CRITICAL MASS: As of 8/17/19: Rotten Tomatoes: 100% positive reviews: Metacritic: No score yet.
COMPARISON SHOPPING: Gates of Heaven
FINAL RATING: 6.5/10
NEXT: Xenophobia