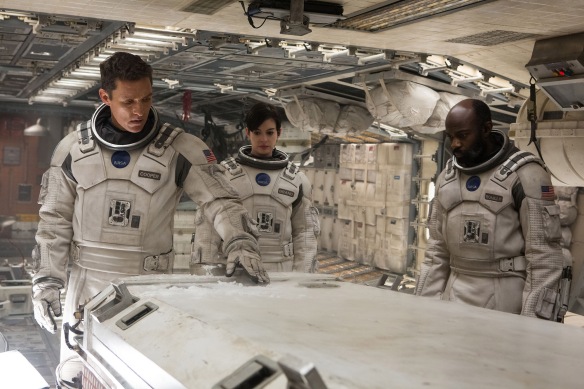 Most of the movies will never play theatrically where you live (unless you live in either New York or Los Angeles) but many of those that won’t will be available through Video-on-Demand; check with your local cable or satellite providers to find out if any specific movie is available through that medium.

WORST FRIENDS (Level 33) Genre: Romantic Comedy. Badly injured in a car accident, a prankster has only a childhood friend and a physical therapist to help him recover – until his friend’s high school crush moves back in to town. Release Strategy: Limited. RATING: 2.6 Looks mildly interesting.

INTERSTELLAR (Paramount) Genre: Science Fiction. With the Earth no longer able to support life, a desperate attempt is made to use a wormhole to find us a new home. Release Strategy: IMAX (expands Standard Wide November 6). RATING: 1.0 The latest from Christopher Nolan looks like an epic science fiction experience.
NATIONAL GALLERY (Zipporah) Genre: Documentary. A fascinating glimpse backstage at London’s National Gallery as administrators argue (politely), docents wax rhapsodic and restorers…erm, restore. Release Strategy: New York City only. RATING: 2.7 The love that goes into a major museum like this is evident but so is all the work.

ALWAYS WOODSTOCK (Gravitas) Genre: Musical. An aspiring singer after losing her job and her fiancée pawns her ring and goes home only to find her muse and the love of her life. Release Strategy: Limited. RATING: 3.3 Seen this before in other films, although a good young cast including James Wolk, Alison Miller and Rumer Willis gives it one on the plus side.
BAD TURNS WORSE (Starz Digital Media) Genre: Crime Drama. Three teens, partying on stolen money, end up indebted to a sociopathic criminal who forces them to steal from his vicious boss – at which time things go from bad to worse. Release Strategy: Limited. RATING: 3.0 Mark Pellegrino makes for a charismatic villain but rest of trailer looked a bit bland.
BEYOND THE LIGHTS (Relativity) Genre: Musical. The latest R&B diva/superstar is crumbling under the pressure until she falls for a local cop assigned to her detail. Release Strategy: Wide. RATING: 3.5 A version of The Guardian without Whitney Houston seems kind of pointless.
DUMB AND DUMBER TO (Universal) Genre: Comedy. Lloyd and Harry return after a 20 year absence to find Harry’s daughter – did anyone miss them? Release Strategy: Wide. RATING: 3.4 The Farrelly Brothers, once the toast of Hollywood comedies, now find themselves in sore need of a hit.
FOXCATCHER (Sony Classics) Genre: True Life Drama. An initially supportive but deeply disturbed multi-millionaire sets up a wrestling training center for the Olympics but his efforts only end in tragedy. Release Strategy: New York City/Los Angeles. RATING: 1.0 Said to be a sure thing Best Actor nomination for Steve Carell.
THE HOMESMAN (Roadside Attractions) Genre: Western. Three women on the edge of the American frontier who have been driven mad by the harsh life must be transported to Iowa where a kindly minister will take them in but the journey is a dangerous one. Release Strategy: Limited. RATING: 1.3 The latest from Tommy Lee Jones has a cast that includes Meryl Streep and Hilary Swank; will Oscar look past their general disdain for Westerns?
MISS MEADOWS (eOne) Genre: Action. Beneath the refined exterior of a school teacher lies a gun-toting vigilante who believes in correcting bad behavior the hard way. Release Strategy: Limited. RATING: 2.8 A modern revision of a vigilante film with a patina of quirky humor.
OCCUPY THE FARM (Self-Released) Genre: Documentary. Urban farmers in the Berkeley area take on the University of California to protect prime farmland from being sold for development. Release Strategy: New York City (opens in Los Angeles November 21). RATING: 2.2 Asks the very pertinent question who gets to decide what public land is used for.
RED ARMY (Sony Classics) Genre: Sports Documentary. The Red Army hockey team is one of the best in history; their impact on social change in the Soviet Union is largely unknown in the West but is immeasurable. Release Strategy: New York City (expands January 2015). RATING: 1.7 I love hockey but this isn’t strictly speaking about hockey.
ROSEWATER (Open Road) Genre: True Life Drama. A reported for Newsweek is arrested in Iran and held as a spy, tortured but refuses to break. Release Strategy: Limited. RATING: 1.4 An inspiring story of personal courage and the triumph of will from director Jon Stewart – yes, THAT Jon Stewart.
SAVING CHRISTMAS (Goldwyn) Genre: Faith-Based Drama. During an office Christmas party, a man realizes his brother-in-law who is unenthusiastic about the holiday needs to be shown the true meaning of Christmas. Release Strategy: Limited. RATING: 4.0 Strictly for conservative Christians, a present from Kirk Cameron.
WOLVES (Ketchup) Genre: Horror. Fleeing after the brutal murder of his parents which he’s accused of, a popular high schooler searches for answers about who he is and where he comes from. Release Strategy: Limited. RATING: 2.7 Not so sure this brings anything new to the werewolf genre.

BAD HAIR (Cinema Tropical/FIGA) Genre: Drama. As school picture day approaches, a nine-year-old Venezuelan boy fears he has “bad hair” and wants his frizzy hair straightened. Release Strategy: New York City only. RATING: 3.0 The TIFF trailer is a bit incoherent but it would be interesting to get a glimpse into the slums of Caracas.
PULP: A FILM ABOUT LIFE, DEATH AND SUPERMARKETS (Oscilloscope Laboratories) Genre: Musical Documentary. One of the smartest and quirkiest bands to come from the Britpop movement, they prepare to say goodbye after 25 years with a final concert in their hometown of Sheffield. Release Strategy: New York City only. RATING: 2.2 Criminally overlooked in the U.S. they are cult favorites in their native Britain.

A GIRL WALKS HOME ALONE AT NIGHT (Kino Lorber) Genre: Horror. In a small Iranian village the people living there are oblivious that there is a vampire in their midst. Release Strategy: Limited. RATING: 1.7 A VERY different take on the traditional vampire film and an unfiltered look at small town Iran.
EXTRATERRESTRIAL (IFC Midnight) Genre: Sci-Fi Horror. A young woman goes to her parents vacation cabin to cope with their divorce, bringing along a group of friends to keep her company when they witness the crash of an alien ship – and soon realize that the occupant is still alive. Release Strategy: Limited. RATING: 2.4 While the idea doesn’t seem particularly innovative the execution seems pretty strong judging on the trailer.
THE HUNGER GAMES: MOCKINGJAY – PART 1 (Lionsgate) Genre: Science Fiction. Panem erupts into civil war and Katniss becomes a symbol for the resistance but President Snow will stop at nothing to keep her out of this larger game. Release Strategy: Wide. RATING: 1.3 Maybe the best of the young adult book franchises except for Potter.
THE MULE (XLRator) Genre: Crime Comedy. Based on actual events, an Australian drug mule captured by the police decides to retain the product in his stomach in order to conceal the evidence. Release Strategy: Limited. RATING: 2.4 Just. Friggin. Weird.
REACH ME (Millennium) Genre: Drama. When a motivational book by a mysterious author goes viral it affects a disparate group of people in different ways. Release Strategy: Limited. RATING: 2.9 An impressive cast but movies about self-help books that revolutionize people’s lives always seem to end up being a bit of a circle jerk.
VHS: VIRAL (Magnolia) Genre: Horror Anthology. A group of fame-obsessed teens unwittingly become the stars of a viral video that they may not survive. Release Strategy: Limited. RATING: 1.7 In all honesty some of these anthologies can be real hit or miss but this one looks to be honest-to-God scarier than hell.

HORRIBLE BOSSES 2 (New Line) Genre: Comedy. The three losers from the first movie have gone into business for themselves only to find that business has been stolen out from under them, forcing them to turn back to a criminal act to set things right. Release Strategy: Wide. RATING: 1.6 Somehow doesn’t look quite as funny as the first film but given the talent onscreen am still optimistic this might be worth checking out.
PENGUINS OF MADAGASCAR (DreamWorks Animation) Genre: Animated Feature. The lovable title creatures go on an adventure of their own, filled with mystery, intrigue and snacks. Release Strategy: Wide (Standard, 3D, IMAX 3D). RATING: 2.4 The best part of the Madagascar franchise might be way better than those movies if we’re lucky.

THE BABADOOK (IFC Midnight) Genre: Horror. A mother struggles with her six-year-old boy but the sinister presence of a storybook monster may turn out to be real and threatening them both. Release Strategy: Limited. RATING: 1.3 One of the most acclaimed films to come out of this year’s Florida Film Festival.
BEFORE I DISAPPEAR (IFC) Genre: Drama. In the midst of committing suicide, a junkie gets an urgent call from his sister to babysit her daughter. Release Strategy: Limited. RATING: 1.2 One of my favorite films from this year’s Florida Film Festival, you can read my review of it here.
THE IMITATION GAME (Weinstein) Genre: Biographical Drama. During World War II, genius mathematician Alan Turing is called upon to break the unbreakable code – Enigma. Release Strategy: Limited . RATING: 1.9 More possible Oscar consideration for Benedict Cumberbatch.

SCHEDULED TO BE REVIEWED HERE AS NEW RELEASES
Interstellar, Big Hero 6, The Theory of Everything, Foxcatcher, The Imitation Game, The Hunger Games: Mockingjay – Part 1, Horrible Bosses 2, The Penguins of Madagascar