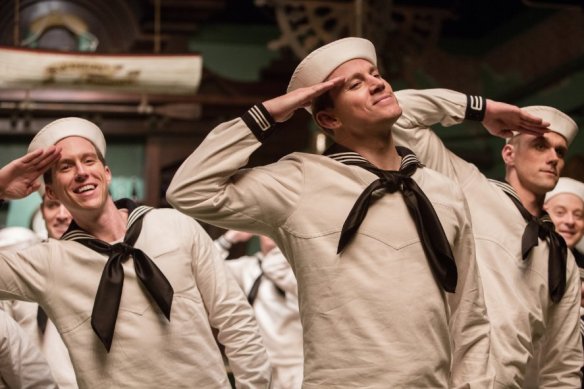 In the Golden Age of Hollywood, a studio head struggling to get the studio’s prestige project made while keeping an eye on all the other movies in production suddenly finds a crisis developing when the star of his big release is kidnapped. Trying to keep the news out of the gossip columns while negotiating with the kidnappers and dealing with the egos of stars and directors alike is just another day at the office.

See the trailer, clips, interviews, a featurette and B-roll video here.
For more on the movie this is the website.
Release Formats: Standard
Genre: Comedy
Now Playing: Wide Release
Rating: PG-13 (for some suggestive content and smoking)

(Lionsgate) Benjamin Walker, Teresa Palmer, Maggie Grace, Tom Welling. Nicholas Sparks strikes again as a beautiful, spunky med student moves in next door to a laid-back ladies man. She wants nothing more than to settle down with her long-term boyfriend while he doesn’t want his lifestyle tied down to a particular woman so the two are wary of one another. Of course, they fall in love with each other and change each other’s lives for the better – until one of them becomes faced with a heart-wrenching decision that nobody should have to make.

See the trailer, clips and a promo here.
For more on the movie this is the website.
Release Formats: Standard
Genre: Romance
Now Playing: Wide Release
Rating: PG-13 (for sexual content and some thematic issues)

Pride and Prejudice and Zombies

(Screen Gems) Lily James, Sam Riley, Bella Heathcote, Matt Smith. The classic Jane Austen novel gets an overhaul as the people of Longbourn and Regency-era Britain are faced with a plague that kills much of the population but also reanimates the dead. The prim and proper ladies of the time are forced to learn the arts of war along with the arts of homemaking. That in itself to the people of the time is a definite sign of the apocalypse.