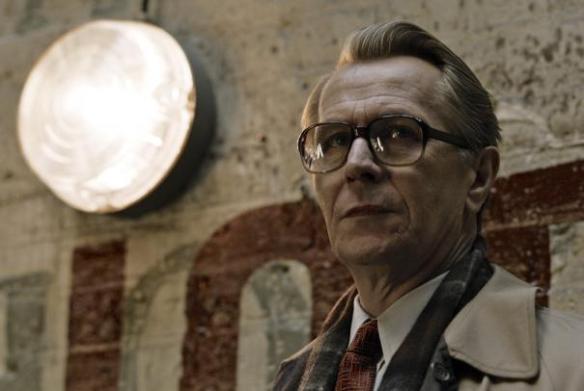 Believe it or not, George Smiley IS smiling!!!!

Some spies are meant to be shaken and not stirred. Others are more intellectual, preferring to think their way out of a situation by thoroughly researching. For them, the spy game is as complex and as action-packed as a game of chess.

George Smiley (Oldman) couldn’t have been given a worse surname. He rarely smiles, not even for a moment. He is a methodical man, emotionless. He worked as an analyst for MI6, the British counter-intelligence group that was made famous by James Bond. However, his life is much different than that of the dashing Ian Fleming creation. Smiley works for the Circus (it is unclear whether this is a group within MI6 or the directorate of the agency itself) as the right hand man for Control (Hurt). It is 1973 and the Cold War is in full swing.

A disastrous mission to Hungary leads to a purge in the Circus. Control and Smiley are out, and in are a cadre of four men – Percy Alleline (Jones) – the leader, Bill Haydon (Firth), Roy Bland (Hinds) and Toby Esterhase (Dencik).  Control suspected one of them of being a double agent for the Soviets and had nicknamed them Tinker, Tailor, Soldier and Poor Man respectively, after a British nursery rhyme. When field agent Rikki Tarr (Hardy) turns up with information about the identity of the mole, minister Oliver Lacon (McBurney) pulls Smiley out of retirement to ferret out the traitor.

Aided by his protégé Peter Guillam (Cumberbatch), Smiley attempts to quietly find the mole while keeping clear of the MI6 brass, any one of whom might be the culprit and all the while dealing with the estrangement from his beloved (but promiscuous) wife Ann.

Alfredson was the director of the excellent Swedish vampire film Let the Right One In. This is his first English-language movie and given the cold exteriors of his previous film is the right choice for this one. The England of 1973 is a dreary looking one, with grey washed out skies, filthy buildings, dingy interiors and in general, just a depressing place to be. Truly a Cold War.

Oldman gives a performance that is surprisingly strong. Much of the movie he is spent repressing his emotions and has to show his feelings with his eyes. There is a great deal of sadness inside the spy; sadness at the failure of his marriage, sadness that among his trusted friends is a betrayer, sadness that he is growing into an uncomfortable middle age. There is a scene near the end of the film where Smiley tells Guillam about his one and only encounter with the Soviet spy Karla, who is behind the ole plot. As Smiley tells Guillam the story, you can see the regret; the emotions that have been repressed for so long are just aching to be let out. It’s one of the best single scenes that any actor has performed this year in any movie and it’s worth seeing the film just for that one scene. It’s so good that if Oldman gets a Best Actor nomination I’d be willing to bet that’s the clip that gets shown at the Oscars.

There is a bevy of fine English actors here to support him, including the aging Hurt (who mostly appears in flashback), the combed over McBurney and Hardy, who knows he has done some bad things and wants to do just one thing right. Still, it is Oldman who carries the movie in the palm of his hand – a tough gig when you have Oscar winner Colin Firth in the line-up and Firth is far from disappointing here.

This is a cerebral spy film, one which is more of a chess game than an action thriller. The pace of the movie is going to drive most Bondphiles absolutely batty. There are no car chases, no high tech gadgets and no henchmen. There are no bon mots delivered after the spy beats some thug up without so much as a hair going out of place;

This is spycraft in the real world circa 1973. This is listening devices with operators recording and then writing down the transcripts of the conversation. This is conferences in soundproof rooms. This is tired old men sending down orders to foolish young men. It’s trying to out-think your opponent, knowing that if you guess wrong that your country could wind up a smoking ruin of irradiated ash.

This is a very different kind of spy movie – it’s been made as a television miniseries back in the day with the late Sir Alec Guiness as Smiley and his performance is still considered the definitive one for the role, although I’m sure in the years to come there will be plenty to take up Oldman’s side on the issue.  Alfredson does a great job of re-creating the era and the screenwriters Bridget O’Connor (who passed away shortly after finishing the script) and Peter Staughan capture the soul of le Carre’s work. The movie does it justice to a certain extent but I only wish the movie wasn’t so damn glacial. I’m all for thoughtful but a little action is nice too.

REASONS TO STAY: Lacks action and inertia; can be very slow in places.

FAMILY VALUES: There is some violence and a bit of sexuality and nudity.

TRIVIAL PURSUIT: Oldman based his performance as Smiley on some of the mannerisms that he observed from author John le Carre, who also has a cameo as a somewhat drunken partygoer at the Christmas party.

SWINGING SIXTIES LOVERS: Plenty of smoking, drinking and shagging (by inference) – all things that are politically incorrect these days. What once were habits now are vices.