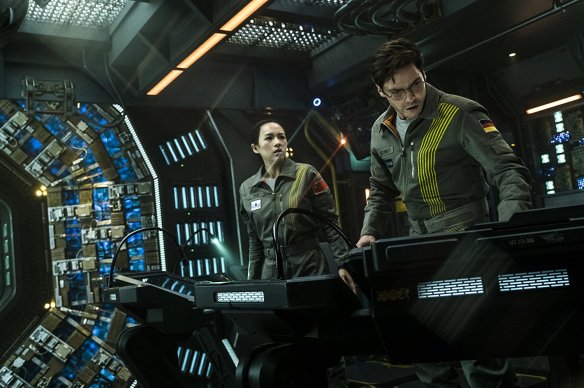 Houston, we have a problem.

Sometimes movies are made with the best of intentions, utilizes a nifty premise and terrific cast. We get excited for the movie but watch as it’s release date suffers delay after delay. We see no trailers, no publicity materials just rumors that the studio is dissatisfied with the final result. When we finally get to see the movie, sometimes we find out the studio was justified in their fears. More often than not the movie’s problems stem from studio interference. I don’t get the sense that’s what happened here.

In 2028 Earth is caught in a massive energy crisis. Sober news anchors intone that the planet will run out of energy within five years. Racing against time, a multinational scientific team on a satellite orbiting the Earth works to solve the crisis with a particle accelerator which will do…something. We’re never quite sure what. Thankfully, The Cloverfield Paradox doesn’t way itself down with unnecessary explanations.

Test after test ends in failure and the crew – the American captain Kiel (Oyelowo), the also American communications officer Hamilton (Mbatha-Raw), the German engineer Schmidt (Brühl), the Chinese physicist  Tam (Zhang), the Russian something or another Volkov (Hennie), the Brazilian doctor Monk (Ortiz) and the Irish technician Mundy (O’Dowd) get into finger-pointing and tensions between the Americans and Russians back home don’t help matters any. Then a power surge during a test causes the experiment to actually work. Everyone is happy – until they look out the window and notice that Earth isn’t there. That’s when the going gets really weird.

The cast here is as first-rate as any for any movie this year let alone a direct-to-Netflix film and quite frankly, they earn their paychecks impressively. The trouble is, most of them are hamstrung by underdeveloped characters. Other than Hamilton who at least gets the semblance of a backstory, most of the characters are essentially defined by their functions to the plot; the red herring, the indecisive one, the suspicious one, the compassionate one and so on. As the comic relief, O’Dowd is the most impressive here although Brühl and Mbatha-Raw both come close. While it is laudable to make the leads persons of color, it would have been far more admirable to give them something to work with.

The other glaring problem here is that while the concept itself – involving parallel universes and alternate realities – is intriguing, the execution is lacking. It’s all exposition with characters constantly advancing the plot by explaining what’s happening. The movie is scene after scene of too much talking and as the movie gets further alone, the plot begins to go off the rails. While the ending is actually quite nice (and ties the film to previous Cloverfield films), it isn’t enough to save a film which while promising turns out to be not only disappointing but that most awful of cinematic sins – boring.

REASONS TO GO: The cast is pretty nifty. The ending is fun but not enough to save the movie.
REASONS TO STAY: The plot gets more ludicrous as the film goes along. A decent premise is wasted with a poor execution.
FAMILY VALUES: There is some profanity, violence and disturbing images.
TRIVIAL PURSUIT: The film was originally titled God Particle and was intended for theatrical release. After several release date delays, Netflix quietly purchased the film from Paramount and ran the trailer during the Super Bowl – the same day it would become available on the streaming service.
BEYOND THE THEATERS:  Netflix
CRITICAL MASS: As of 8/6/18: Rotten Tomatoes: 17% positive reviews. Metacritic: 37/100.
COMPARISON SHOPPING: Life
FINAL RATING: 5/10
NEXT: The Legend of King Solomon