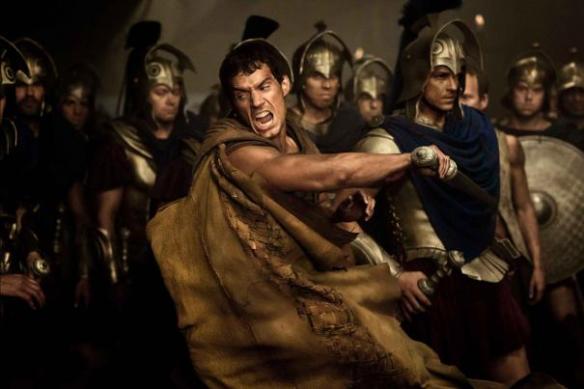 Every month I’m going to look at every movie on the release schedule and try to assign them a numerical value corresponding to how anxious I am to see it. The lower the number, the more I want to see it. A one means I would walk through hell and high water to see it; a four means there’s no interest whatsoever. The numbers are not arrived at scientifically but they aren’t arbitrary either.
The numbers aren’t a reflection of the artistic merit of any of these films, but merely a reflection of my willingness to go to a movie theater and see it. The top four scores will be gathered as a means of reflecting the movies I’m anticipating the most; you may use that as a guide or not.

FIVE STAR DAY (Breaking Glass) Genre: Drama. A man who believes in astrology suffers the worst day ever on a day that was supposed to be his best; he determines to test his newfound disdain for astrology by interviewing three strangers all born on the same day and same place as he. Release Strategy: Limited. RATING: 2.8 An interesting idea but not sure Cam Gigandet is the guy to play this part.
THE OTHER F WORD (Oscilloscope Laboratories) Genre: Documentary. Former punk rockers from the 70s, 80s and 90s cope with fatherhood and try to fit in the needs of parenting with their punk rock values. Release Strategy: New York City (opening in Los Angeles November 4). RATING: 1.9 A really riveting look at how our needs change as we age – and the struggle to maintain our values as they do.

A VERY HAROLD AND KUMAR 3D CHRISTMAS (New Line) Genre: Comedy. The two buddies, estranged over a six year separation, reunite to save Christmas. Release Strategy: Wide (Standard, 3D). RATING: 3.0 Not a big fan of the Harold and Kumar movies but I have to admit this one looks rather interesting – and any movie with NPH in it is all right by me.
KILLING BONO (ARC Entertainment) Genre: Comedy. Two Irish brothers are part of the second best band in Dublin in the 80s, forced to watch as the best band – U2 – rises to world prominence while they languish in obscurity. Release Strategy: Limited. RATING: 2.0 The trailer looked pretty fun; the music sounded pretty good too.
THE LAST RITES OF JOE MAY (Tribeca) Genre: Drama. An aging hustler is forced by circumstances into a reluctant friendship with a single mother and in a most unlikely fashion finds the redemption he was long seeking. Release Strategy: Limited. RATING: 2.2 Dennis Farina has always been an actor I’ve appreciated.
THE SON OF NO ONE (Anchor Bay) Genre: Thriller. A young cop is assigned to the working class neighborhood he grew up in which leads to the unearthing of a secret that threatens to destroy his career and family. Release Strategy: Limited. RATING: 2.7 An extremely strong cast but the trailer left me a little cold.
TOWER HEIST (Universal) Genre: Caper Comedy. The staff of an exclusive New York City apartment tower plot to steal their money back from the Bernie Madoff-like financier who stole it. Release Strategy: Wide. RATING: 2.1 An all-star cast led by Ben Stiller and the return of Eddie Murphy to the kind of role that made him a star.
YOUNG GOETHE IN LOVE (Music Box) Genre: Period Romance. The man who would become one of Germany’s most revered authors falls in love with a woman promised to another. Release Strategy: New York City/Los Angeles. RATING: 2.3 This was another one I didn’t get to see at the Florida Film Festival this year – now I wish I had.

J. EDGAR (Warner Brothers) Genre: Biodrama. The story of one of the 20th century’s most polarizing figures, a man who would symbolize law enforcement and it’s abuses for many – J. Edgar Hoover. Release Strategy: Limited (expands Wide on November 11). RATING: 2.2 They had me at “Directed by Clint Eastwood”.

11-11-11 (Rocket Releasing) Genre: Horror. An American author whose family has been taken from him tragically returns home to a dying father and a growing realization that he is being given a dire warning regarding the date November 11, 2011. Release Strategy: Wide. RATING: 2.9 Hopefully that dire warning has nothing to do with the box office for this first release from Elton John’s new distribution company.
THE CONQUEST (Music Box) Genre: Biographical Drama. The incredible rise to power of French president Nicolas Sarkozy and the price he paid for that power. Release Strategy: Limited. RATING: 2.2 Like any good story, the trailer looked both amusing and tragic.
ELITE SQUAD: THE ENEMY WITHIN (Variance) Genre: Action. A captain in Rio de Janeiro’s elite anti-gang unit is promoted to a government position and finds that the evil that pervades the favelas truly resides in the halls of power. Release Strategy: New York City (opening in Los Angeles November 18). RATING: 2.5 One of the most acclaimed international action films of the year.
THE GREENING OF WHITNEY BROWN (ARC Entertainment) Genre: Family Adventure. A preteen from the big city is forced to move to the country when her family encounters economic hard times and doesn’t like it one bit. Release Strategy: Limited. RATING: 3.8 Looks predictable and decidedly un-entertaining.
IMMORTALS (Relativity) Genre: Fantasy. A CGI-heavy telling of the Greek hero Theseus who battled an evil King and saved the Gods in the process. Release Strategy: Wide (Standard, 3D). RATING: 1.4 Looks good but director Tarsem Singh has a history of making movies that are spectacular images for their own sake.
INTO THE ABYSS (IFC) Genre: Documentary. A look at a convicted murderer sentenced to die in eight days, the family of his victims and those performing the execution. Release Strategy: Limited. RATING: 1.8 Werner Herzog has quickly become one of the best documentarians in the world.
JACK AND JILL (Columbia) Genre: Comedy. A successful commercial director’s twin sister comes to visit for Thanksgiving and proceeds to turn his life upside down. Release Strategy: Wide. RATING: 2.9 When Adam Sandler’s good, he’s wicked good; when Adam Sadler’s bad…
LONDON BOULEVARD (IFC) Genre: Crime Drama. An ex-con tries to protect a movie star and her troubled sister from a vicious mob boss. Release Strategy: Limited. RATING: 2.2 The directing debut from the writer of The Departed.
MELANCHOLIA (Magnolia) Genre: Science Fiction. As a large object hurtles through space to obliterate the Earth, the inhabitants of our planet prepare for the end in their own ways. Release Strategy: Limited. RATING: 2.3 Sounds like a fascinating subject but Lars von Trier has never been one of my favorite directors so I’m kinda wait-and-see about this one.

THE DESCENDANTS (Fox Searchlight) Genre: Dramedy. An indifferent father is forced to re-examine his attitudes towards parenting when his wife is gravely injured. Release Strategy: Limited. RATING: 1.7 This looks like another great role for George Clooney.
TOMBOY (Rocket Releasing) Genre: Drama. A young girl is mistaken for a young boy and decides not to correct the error. Release Strategy: New York City only. RATING: 2.4 Looks like a pretty insightful study on gender identification.

A DANGEROUS METHOD (Sony Classics) Genre: Historical Drama. The story of Freud and Jung, and the troubled young girl who came between them. Release Strategy: Limited. RATING: 1.7 A solid cast and director David Cronenberg make this one to look out for.
ARTHUR CHRISTMAS (Columbia) Genre: Animated Feature. The clumsy younger son of Santa must save the day when Santa’s high-tech operation goes awry. Release Strategy: Wide (Standard, 3D). RATING: 2.0 The latest from the evil geniuses at Aardman Animation.
THE ARTIST (Weinstein) Genre: Romance. The fortunes of a silent film star whose career is on the wane with the advent of talkies and an up-and-coming young starlet are entwined. Release Strategy: Limited. RATING: 1.4 A compelling trailer which indicates that this black and white movie was filmed without sound.
HUGO (Paramount) Genre: Family Fantasy. A young boy lives in the walls of a Paris train station means to solve the mystery of his father’s loss, a grouchy toy shop owner and a heart-shaped lock that has no key. Release Strategy: Limited. RATING: 1.9 Believe it or not, this is the latest from Martin Scorsese. Yes, you read that right.
THE MUPPETS (Disney) Genre: Family. The Muppets biggest fan tries to get the gang back together again in order to save their theater which is about to be razed by a greedy oilman. Release Strategy: Wide. RATING: 2.4 Call me Oscar the Grouch but I just never got into these furry little characters.
MY WEEK WITH MARILYN (Weinstein) Genre: Biographical Drama. A young assistant on the set of The Prince and the Showgirl escorts Marilyn Monroe around Britain. Release Strategy: New York City/Los Angeles. RATING: 2.1 An impressive cast with Michele Williams capturing the look and essence of Monroe down to her toes.
RAMPART (Millennium) Genre: Crime Drama. A brutal L.A. cop finds his life unraveling when he is dismissed from the force. Release Strategy: New York City/Los Angeles (expanding January 27). RATING: 2.5 Looks like a new kind of role for Woody Harrelson.

THE LEGEND OF PALE MALE (Balcony Releasing) Genre: Documentary. When a wild Redtail Hawk (who haven’t lived in New York City for over a century) is evicted from its perch in a posh 5th avenue co-op, the resulting protest becomes a New York media sensation. Release Strategy: Limited. RATING: 2.6 A fascinating look at something that a lot of folks outside of the Big Apple aren’t fully aware of.

KHODORKOVSKY (Kino Lorber) Genre: Documentary. A man once the wealthiest man in Russia becomes a political prisoner because he dared stand up to the corrupt regime. Release Strategy: New York City only. RATING: 2.2 This is an acutely Russian tale.