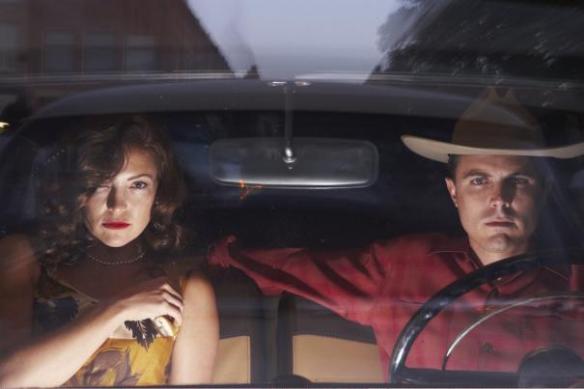 Roger Ebert once said that what we desire is not a happy ending so much as closure. I think this is rather true; we don’t necessarily want to see things finish with a grin and the warm fuzzies; sometimes we want the tale to end in blood and destruction because that is what has been earned – just as long as all the loose ends are tied up.

Lou Ford (Affleck) is affable sheriff’s deputy in a small Texas town in the 1950s. He’s well-liked in the community and well-regarded on the force, particularly by his mentor Sheriff Bob Maples (Bower). His girlfriend Amy (Hudson), is a schoolteacher and everyone in town agrees they make a mighty fine couple and the general consensus is that the two will marry when Lou gets the gumption to pop the question.

What nobody knows is the volcano seething inside of Lou. He raped a five-year-old girl as a teenager for which his big brother Mike took the rap for. When Mike got out of the slam, he went to work for contractor Chester Conway (Beatty) and died under unusual circumstances on the job. Lou has always harbored a suspicion that Chester had something to do with it.

He also has a thing about inflicting pain. Introduced to sadomasochism by his father’s housemaid Helene (Turner), he likes to hurt people and the need to do so is getting more and more irresistible. At the prodding of the Sheriff, Lou visits a prostitute named Joyce Lakeland (Alba) who’s been having an affair with Chester’s son Elmer (Ferguson). The visit escalates into a severe spanking which, as it turns out, Joyce really gets off on. The two begin a passionate affair.

Joyce concocts a plan to extort money from Chester, enough for her and Lou  to leave town and set up new lives with. their ill-gotten cash. Lou is chosen to deliver the payoff. Instead he beats Joyce within an inch of her life (intending for the beating to be fatal) and shoots Elmer dead, setting up Joyce to take the fall for the crime.

Lou however fell short in taking care of Joyce and despite his best efforts, she survives. However, suspicion is beginning to fall on Lou from Amy who thinks Lou is cheating on her, and from County district attorney Howard Hendricks (Baker) who thinks Lou had something to do with Elmer’s murder.

A local youth, Johnnie Pappas (Aiken) is arrested by Hendricks for the crime because he is in possession of a marked $20 bill from Chester’s cash. However, Lou had planted that on Johnnie, the son of a close friend of Lou’s. Lou asks to interrogate him and winds up hanging Johnnie in his cell, making it look like a suicide.

Lou’s blood lust is getting out of control and the noose is tightening. Can Lou get control of himself and figure a way out of the mess he’s in, or will he eventually pay for his crimes?

Winterbottom has been a prolific director, with such films as Welcome to Sarajevo, A Mighty Heart and The Trip on his resume. He is competent enough at what he does, and from time to time shows flashes of brilliance but this won’t stand out as one of his better works. I do give him props for taking one of pulp writer Jim Thompson’s darkest and most violent works and preserving the darkest elements intact – that isn’t easy to do these days of focus groups and trying to pander to a general audience.

Affleck surprised me here. His roles have tended to be pretty easy-going and sweet-natured but here he is a sociopath and nearly irredeemable. He is not  aware of the difference between right and wrong – he has no idea why he does the things he does in some cases – and probably wouldn’t care much if he did. He is as self-centered as it is humanly possible to be; everything he does is for his own benefit and to feed his own psycho-sexual needs, which are dark indeed.

Alba has a difficult role as well as the masochistic prostitute. Even Hudson’s Amy has a few kinks of her own. As  a result, the film has been labeled misogynistic, often by high and mighty critics who don’t think that a woman could possibly enjoy pain in a sexual context. Not only is it possible but it is more common than you might think.

Thompson’s writing style rarely flinches at the darker side of human nature. There is brutality and violence and sexual deviancy that’s depicted with unusual candor and directness. The movie doesn’t shy away from these things, often to the point where gentler souls might be extremely put off by them. This is certainly a movie meant for those with stronger stomachs and steelier resolve.

WHY RENT THIS: Affleck portrays the sociopath dead on, something I didn’t expect. Hard-hitting and disturbing pulp fiction.

WHY RENT SOMETHING ELSE: Overly brutal and sexually twisted in places. Might be too downbeat for some.

FAMILY VALUES: There is sudden, graphic violence that is quite disturbing, some kinky sexual content and graphic nudity.

TRIVIAL PURSUIT: Tom Cruise was at one time attached to the part of Lou Ford with Andrew Dominik directing. When Cruise dropped out, so did Dominik citing that the role was so complex and disturbing it needed a star to carry it.