Zac Efron and Taylor Schilling save the last dance for each other.

The novels of Nicholas Sparks and the films that are based on them tend to sparkle with a certain patina of sentiment. They are filmed in rich autumnal colors, through hazy lenses smeared with Vaseline. They are the stuff of modern day fairy tales.

Logan Thibault (Efron) is a Marine serving in Iraq. While on his last tour he goes on a raid of a home and comes under heavy fire from snipers. He watches as men from his company and others are cut down by the insurgents.

The next morning he and his men are lounging around the now-secured area when he spies a photograph in the rubble. Curious, he walks over to it, bends over and picks it up to see a beautiful blonde  – when an explosion wipes out the men he’d just been standing with.

The rest of his tour he survives again and again, sometimes without rhyme or reason. One of his fellow Marines jokes that the girl in the picture is his guardian angel. Logan isn’t laughing though; he thinks she might just be.

After leaving the Marines he goes to visit his sister and her family in Colorado but it’s clear he has issues. He’s jumpy, morose and when startled reacts violently. He knows he can’t stay with his sister and her bratty sons; he decides to go find the woman in the photograph. By pure happenstance he stumbles on a picture of the lighthouse in the back of the photo with the woman and decides to hoof it from Colorado to Louisiana.

Six years later, he arrives in Louisiana with scarcely a bunion, his impossibly well-behaved German Shepard Zeus by his side. He shows the picture around town and is led to the local pet groomer’s where he finds the object of his search, Beth Clayton (Schilling). She is divorced from Keith (Ferguson), the town sheriff and son of the powerful Judge Clayton (LeFevre) and at the moment an uneasy peace exists between them, threatened by Keith’s alcohol abuse. Beth lives with her son Ben (Stewart) and her grandma Ellie (Danner) and their business is sorely in need of some help. Beth mistakes Logan for a respondent to her want ad but something about him – the fact that he confessed to having walked from Colorado to Louisiana made her a bit reluctant to hire him. However Ellie – who possesses a Sense About These Things – hires him on the spot, hoping he’ll re-ignite Beth’s spark.

Boy does he ever. It takes a few games of chess with Ben (who takes to the newcomer like a tick to a Golden Retriever), a fully clothed outdoor shower for the two of them together and a couple of beers and before you can say Logan’s Your Uncle, Ben the two of them are canoodling.

But the suspicious Sheriff doesn’t like having his ex hanging around another man and when he finds out that he has the Picture, he blabs it to Beth whom Logan neglected to mention that little tidbit of information to. Who had that picture and why will lead Beth to break things off with Logan, even though everyone and their cousin Moe knows that he’s The One for her. What will it take to get the two of them together? How about a freakish rainstorm?

Yup, this is Nicholas Sparks through and through, laden with coincidences and conveniences. In an interview, he talked about the book having a theme of destiny and fate, items he claims he doesn’t believe in himself. Me, I don’t buy it – most of Sparks’ books have an element of events conspiring to bring true love together by the final chapter, or tearing them apart.

Efron plays the taciturn Logan and we all know that he saw a lot of Bad Things over there because he’s supposed to be haunted. We can tell he’s haunted because his expression never changes. Ever. And his periwinkle blue eyes seem to look right through things. Efron may not be the most expressive actor on the planet but I know he can act. I’ve seen him do it in other movies. I think he either decided to play Logan as a soul-dead person, or he was told to by the director. Either way it was a poor choice. Even so, he has enough natural charisma that I actually liked his character. Go figure.

Schilling doesn’t generate a lot of heat with Efron and really doesn’t do much to make me think Beth is worth walking down the block for, let alone thousands of miles. Danner alone gives her role anything that can be qualified as memorable.

REASONS TO GO: Much better than I expected it to be. I liked Efron in this, although I would have liked a bit more expressiveness from him. Nicely photographed.

REASONS TO STAY: A little too over-reliant on coincidence.

FAMILY VALUES: There is some war and domestic violence as well as a bit of sexuality and drinking.

TRIVIAL PURSUIT: The filmmakers changed the location of the film to Louisiana from North Carolina where the book was set.

COMPARISON SHOPPING: Message in a Bottle

ARMED FORCES LOVERS: The studio screened the film in advance on military installations throughout the world as a way of saying thank you to the men and women in uniform.

NEXT: The Five-Year Engagement 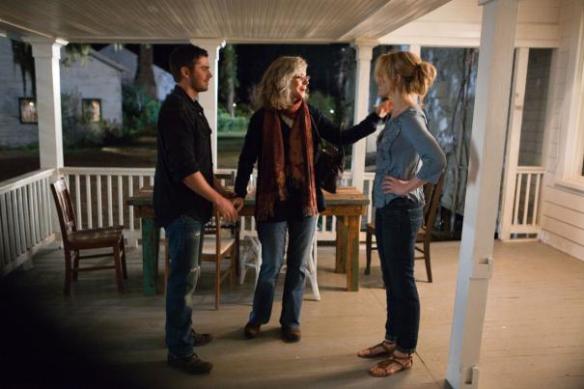 A young soldier’s life is saved in Afghanistan when he pauses to pick up a photo of a woman from the rubble; his platoon, where he’d been standing just moments before is wiped out by an explosion. After his tour of duty ends, the soldier vows to find the woman and thank her. Against all odds, he finds her – and has trouble explaining why he was looking for her in the first place. Soon enough, he falls in love with the comely lass, but there are those who’d rather not see the relationship happen. From the works of Nicholas Sparks.

See the trailer, featurettes and a promo here.

Rating: PG-13 (for for some sexuality and violence)

(DisneyNature) Tim Allen (narrator). The latest Earth Day Disney nature feature follows a young chimpanzee named Oscar for the first four years of his life. His life is irrevocably changed when tragedy befalls his mother and he finds himself with a surprising ally.

See the trailer and featurettes here.

(Screen Gems) Michael Ealy, Regina Hall, Kevin Hart, Gabrielle Union. A group of women read Steve Harvey’s best-selling book and put the information in it to good use in the romantic skirmishes we call modern dating. Stung, the victimized men determine to turn things around by using the book against their women. And here I thought dating was supposed to be fun.

Rating: PG-13 (for sexual content, some crude humor, and brief drug use)

(Eros Entertainment) Yami Gautam, Annu Kapoor, Ayushmann Khurrana, John Abraham.  The desperate director of a fertility clinic whose success rate has been taking a nosedive sees his fortunes reversed when he discovers a handsome, virile Punjabi whose donated sperm begins creating babies left and right. When the young man falls in love however, his shady past as a sperm donor threatens to kill his relationship before it begins.