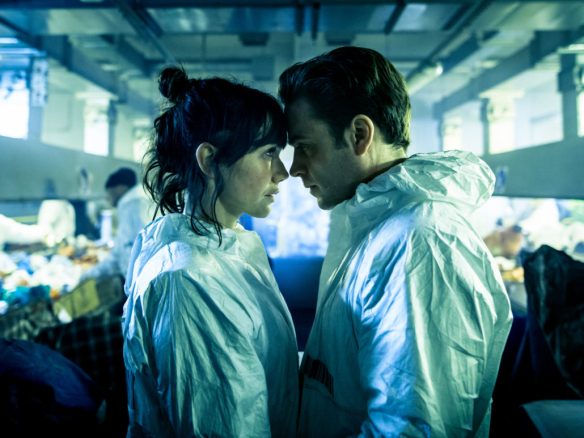 Did you hear the one about the star-crossed lovers?

There are movies that spell things out for you and then there are movies that force you to figure things out. I don’t have a problem with the latter kind of cinema but there’s an occupational hazard that the film can lead you down the primrose path without giving you the payoff you deserve for your efforts.

Adam (Polak) wakes up in 2030 with no memory of who he is or what he’s doing in Warsaw. He is given a job as a janitor in a high-tech office building where good-natured Sebastian (Staniewicz) shows him the ropes. It is at work that he encounters Goria (Boladz), a beautiful but somewhat aloof manager – at least she seems to be as she is one of the few who has an “office” of her own – and with whom he falls deeply in love. At first she rebuffs his advances (somewhat caustically, I might add) but during an explosion and fire in a neighboring building causes the panicked workers to flee their own building, the two engage in sweaty, manic sex.

Adam stumbles upon an old-style radio that picks up mysterious broadcasts which might be coming from the year 1952. He also begins to have visions of that era, visions that he struggles to understand. As it turns out, like Billy Pilgrim, he is unstuck in time and whether he will stay in a past ruled by dictatorial communists or in the dystopian future ruled by a KGB-like secret police but which includes Goria, is anybody’s guess.

I’m not 100% sure that this synopsis does the plot justice. Bodo Kox has created a future that looks very lived-in although to be blunt, the technology seems a might more advanced than ten years hence seems likely to produce. Water is severely rationed (which given the situation with climate change seems like a distinct possibility) and privacy is non-existent (which given how little privacy we currently have given that everything we do is recorded). People live in fear of a secret police that are aware of everything they do. It’s not the sort of Brave New World that we signed up for.

The chemistry between Polak and Boladz is a bit complicated; at times there is a genuine bond apparent between them but at others there’s a distance that’s just as tangible. That chemistry is central to the success or failure of this film and I can’t say that it works completely. This is the film’s most glaring flaw; there are also some logical missteps in the story.

I have to give the filmmakers points for trying to deviate from standard time travel and dystopian future formulae. The script could have used another go-round of polish and the leads maybe recast although to be honest I’d keep Boladz; she has star quality. Polak is a bit bland, leading one to wonder what the Polansky she sees in him. Cerebral sci-fi fans should give this one a look.

REASONS TO SEE: The production design depicts a lived-in future.
REASONS TO AVOID: The chemistry between Polak and Boladz is inconsistent.
FAMILY VALUES: There is violence, profanity and some sexuality.
TRIVIAL PURSUIT: The film was nominated for two Polish Oscars in 2017, for Best Production Design and Best Music Score.
BEYOND THE THEATER: Amazon, Google Play, Microsoft, Vimeo, Vudu, YouTube
CRITICAL MASS: As of 7/13/19: Rotten Tomatoes: No score yet: Metacritic: No score yet
COMPARISON SHOPPING: Brazil
FINAL RATING: 5.5/10
NEXT: The Incredibles 2