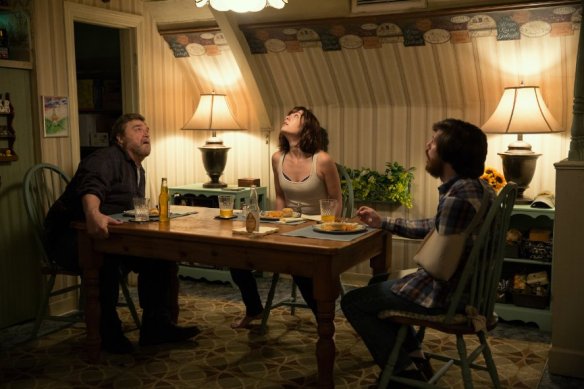 After a car accident, a woman awakens in an underground bunker with a man who claims the outside world was destroyed in a nuclear war. Tensions build however as she begins to suspect that there’s something else going on outside. Not a direct sequel or prequel to Cloverfield but more of a blood cousin, according to creator J.J. Abrams.

See the trailer, clips, interviews and promos here.
For more on the movie this is the website.
Release Formats: Standard, IMAX
Genre: Horror
Now Playing: Wide Release
Rating: PG (for some thematic material including frightening sequences of threat with some violence, and brief language)

(Columbia) Sacha Baron Cohen, Mark Strong, Isla Fisher, Rebel Wilson. Two English orphan boys; one becomes the most skilled assassin in MI6, the other a football hooligan. Separated as young boys, the hooligan resolves to find his brother but when he finally does, he inadvertently botches a job putting the both of them in danger. On the run and hunted by friend and foe, the assassin realizes if he is to save the world – and himself – he is going to need the help of his idiot brother.

(CODEBLACK) Terrence Jenkins, Paula Patton, Kali Hawk, Brandy Norwood. A serial playboy, jaded and disillusioned about the permanence of relationships, takes a bet that he could stay with the same woman for one month without falling in love. However, the woman he falls for turns out to be the woman of his dreams. Will he choose love over money?

See the trailer, clips and interviews here.
For more on the movie this is the website.
Release Formats: Standard
Genre: Romantic Comedy
Now Playing: Wide Release
Rating: R (for sexuality, some nudity, and language throughout)

(Magnolia) Kristoffer Joner, Thomas Bo Larsen, Ane Dahl Torp, Fridtjov Såheim. A picturesque Norwegian village, nestled in a beautiful fjord and bolstered by a lucrative tourist trade, sits in the barrel of a shotgun; a shifting of tectonic plates and the mountain sitting at the other end of the barrel could unleash a cataclysmic wave with only ten minutes for the villagers and the tourists to reach high ground. But the Wave is only the beginning of the disaster.

See the trailer here.
For more on the movie this is the website.
Release Formats: Standard
Genre: Action
Now Playing: Enzian Theater (Friday night only)
Rating: R (for some language and disaster images)

(Focus) Sean Bean, Sara Lazzaro, Adam Greaves-Neal, Christian McKay. The life of the boy Jesus Christ, little known and only speculated at, is examined here as a seven-year-old boy must come to terms with his own divinity and his mission upon this earth.

See the trailer, interviews, a clip and B-roll video here.
For more on the movie this is the website.
Release Formats: Standard
Genre: Biblical Drama
Now Playing: Wide Release
Rating: PG-13 (for some violence, disturbing images and thematic elements)