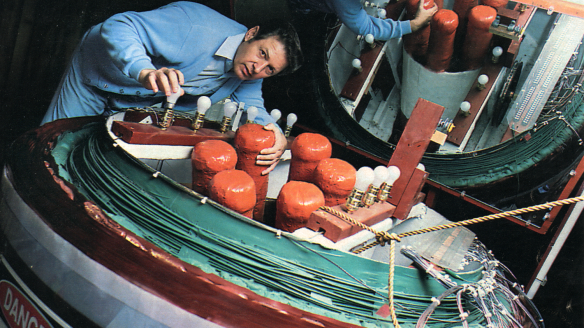 Rage against the machine.

Most people won’t know the name of Joseph Newman, but maybe they should. At a time where renewable sources of energy are hard to come by, he invented a machine that put out more energy than it took in. For the science community, endorsements were hard to come by; few reputable scientists were willing to stake their reputation on a machine that apparently broke the second law of thermodynamics.

Newman went to get a patent on his invention, but ended up entering into a protracted fight with the United States Patent Office, which denied him his patent. The legal battle would eventually cost him his family, his home and his reputation.

Documentary filmmaker Jon Fox spent 15 years putting together the footage that make up this film, ranging from archival news reports, interviews as well as more current footage, including some fairly impressive impressionist-like animation. The footage is blended together well.

There are people who swear that this machine would have changed the world as we know it, offering low cost energy available on a global scale. Others state that there had to be some sort of fraud going on, a hoax perpetrated for scientific rubes as it were. The fact that Newman lived in Mississippi brought out some ingrained prejudices about the respect others have for Southern intellects.

Like many documentaries, there are a lot of interviews with people who worked with Newman or knew him. As with most documentaries that utilize interviews, there is really no way to make them any more interesting than they are. The guys being interviewed for the most part are very intelligent guys, but they’re certainly not very charismatic, so be forewarned.

That is not to say that every interview here isn’t worth your while. Newman himself is interviewed after years of being reclusive and disillusioned and in all honesty, he seems very much a changed man – paranoid, bitter and contentious. While given what happened to him it’s not hard to understand why, he is in many ways a victim of his own hubris. He was a boxer early on in his life and that pugilistic attitude that developed remained with him until he passed away. Sadly, the secret of his machine, which he promoted to the end of his days, may never be realized.

Fox, who near the end of the film bears the brunt of Newman’s rage, is even-handed in his dealing with the mercurial Newman. He certainly avails a certain amount of sympathy for the man’s situation and makes no bones about where he stands vis a vis the conduct of the American government towards one of its own citizens which was absolutely deplorable. The truth is that no scientist was ever able to prove that Newman’s machine was a hoax, or that it didn’t do what he claimed it did. Every test it underwent in the light of day was successful (the tests that weren’t were conducted by those who had a stake in proving that the machine was a fake and took place behind closed doors). It seems to me that the world lost out on a device that would have been transformative.

Newman’s fight was an uphill battle to say the least, and perfectly illustrates how the deck is rigged against the little guy with a big idea to make it successful. While there’s no conclusive evidence that the power companies colluded against Newman, it is extremely likely that they did. Whether Newman’s device would have revolutionized the way we receive energy is a matter of conjecture; we’ll truly never know.

REASONS TO GO: A real life David vs. Goliath story. Fascinating watching the machine in action.
REASONS TO STAY: Too many talking heads.
FAMILY VALUES: Occasional profanity.
TRIVIAL PURSUIT: Newman’s interview with Johnny Carson on the Tonight Show lasted sixteen minutes, which is considered to be the longest interview the legendary host ever did with a non-celebrity guest.
CRITICAL MASS: As of 5/30/16: Rotten Tomatoes: No score yet. Metacritic: No score yet.
COMPARISON SHOPPING: SlingShot
FINAL RATING: 7/10
NEXT: The Huntsman: Winter’s War