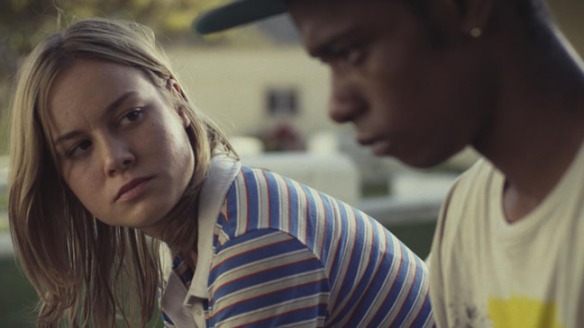 We call them “at-risk” kids but for the most part, we haven’t a clue what they’re really at risk from. Sure, we have a general idea that they’re runaways and come from less-than-perfect homes but the horrors that these kids live through doesn’t really hit home unless we’ve lived it, or know someone who did.

Grace (Larson) is the floor supervisor at Short Term 12, a residence facility for troubled teens. Most of them come from homes of abuse both physical and emotional and some of these kids can barely function in a normal society. She is compassionate and actually listens to the kids which makes her atypical for most humans. Her boyfriend Mason (Gallagher) also works at the home, along with newbie Nate (Malek) who’s just started.

Some of the kids are pretty messed up. Sammy (Calloway) periodically runs out of the facility screaming at the top of his lungs; he has a collection of toys that he clings to and has a somewhat creative imagination. Marcus (Stanfield) is about to turn 18 at which time he’ll be forced to leave this temporary facility and he’s intimidated at having to make it in the real world, so his normal quiet demeanor has turned angry and he is acting out more than usual, particularly when it comes to Luis (Hernandez) who likes to pick on him.

Into this volatile environment comes Jayden (Dever), a young girl with a whole lot of attitude. She’s a cutter – inflicts wounds on herself in order to relieve her psychological pain – and has a hair-trigger temper that explodes at the least provocation. She’s a problem child but Grace is patient and soon begins to notice that the two of them are not quite so different as it would first appear.

Grace however turns out to have some issues of her own – she rarely takes the advice she hands out her own kids and talk out her problems with Mason. However, Mason isn’t willing to give up on her and with the patience of a saint, waits for whatever it takes for her to open up and commit and as Grace faces an imminent life changing event, everything she’s built threatens to crumble down around her.

Cretton apparently worked in a facility such as the one depicted here and the first observation that comes to mind is “authentic.” The kids here aren’t monsters but they aren’t saints either; they’re just trying to cope despite having a deck particularly stacked against them. Grace, likewise is neither monster nor saint – she tries to help out the best she can but there is little authority that she can exercise (while the kids can be forcibly be brought back inside if they try to run away, once they actually leave the property they can’t be touched although staff member will follow them to whatever destination they have in mind and try to talk them back). As she tells Nate “We’re not therapists. You’re here to create a safe environment, and that’s it.” That’s a task not unlikely trying to juggle chainsaws and live hand grenades.

The relationship between Grace and Mason is genuine as well. They’re both twenty-somethings who spend nearly the entire day together but Grace has intimacy issues – not necessarily having to do with sex. Letting Mason in is nearly impossible for her and as it turns out with good reason. He is moon-crazy about her and she knows it and it tears her apart that she can’t give him what he needs. This is romance in the real world although men as patient as Mason are pretty hard to come by. Most guys would have said “hasta la vista” to Grace awhile ago.

This is extremely well-acted. Gallagher, who has turned a few heads for his work on the acclaimed HBO series The Newsroom shows big screen promise here. While at times Mason’s a bit too good to be true, he’s basically the kind of guy that most young women search their entire lives for. Not all of them find one.

Dever, who plays the youngest daughter on the Tim Allen sitcom Last Man Standing is also a revelation. This is a very different role for her, much more of a stretch than Gallagher had to make. I was impressed at the depth of emotion Dever went to and basically this is her clarion call to one and all that here is a very fine young actress who is going to be competing for some top acting awards in the future. Meryl Streep, watch your back.

However the movie truly belongs to Brie Larson and this is also a big step forward from The United States of Tara. If this movie had been distributed by a major studio, Larson would doubtlessly be on the short list for Best Oscar actress buzz this year. Maybe she still will be – certainly if critics voted for them she would be. This is a layered, deep portrayal of a young woman helping kids with some pretty serious issues while her own just-as-serious issues remain unresolved. She’s keeping it together with smoke and mirrors and as her façade begins to crumble, we see at last her rage and sorrow not just at Jayden’s predicament but at her own.

This isn’t all hankies and angst. There are some pretty humorous moments, like the opening scene in which Mason tells a self-deprecating story which very cleverly sets up the rules for the facility and sets the tone for the film. It is a masterful piece of writing (and acting) that labels Cretton as a talent to keep an eye on. While there are a few scenes that are somewhat predictable if you’ve watched any of ABC’s Afternoon Specials, by and large this is a rare take at a major societal problem from a point of view we rarely get to see – those young people who are actually responsible for the day-to-day care for troubled kids at facilities like this.

Many critics and film buffs have labeled this one of the best movies of the year and I have to agree. It’s still out there on a few screens but your best bet to catch it is on home video where it will be arriving soon. Keep an eye out for it – this is the kind of movie that you won’t soon forget.

REASONS TO GO: Heart-breaking and heart-warming. Larson, Dever and Gallagher are amazing. Exceedingly authentic and well-written.

REASONS TO STAY: A couple of scenes carry the faint smell of Afterschool Specialness.

FAMILY VALUES:  Some fairly salty language and a bit of sexuality, not to mention some fairly adult themes.

TRIVIAL PURSUIT: Cretton previously directed a short film with the same title and setting but with a completely different cast of characters and plot.