Charlie St. Cloud (see review) playing catch with his deceased brother is only the latest in a long line of Hollywood films in which the living interact with the dead. There is a certain appeal in knowing that death is not The End, either of consciousness or box office receipts as well. The theme continues to be while not a certain box office draw, at least extremely marketable even now – perhaps especially so given the use of digital effects to make the dearly departed even more spectacular than ever.

There are several movies that didn’t make the top five but were worthy of mentioning here. Beetle Juice (1988) was one of Tim Burton’s most bizarre and delightful films, and the delightfully kitschy afterlife still resonates with hipsters everywhere – I would love to do the calypso to Harry Belafonte in the next life. The Ghost and Mrs. Muir (1947) explored the love between the dead and the living much more believably than the over-earnest (and in the case of Demi Moore, overacted) Ghost. A Christmas Carol (1938) is my all-time favorite holiday film but doesn’t make this list because it is the Spirits that are the central supernatural characters, not Jacob Marley’s ghost. Finally, 13 Ghosts (2001) had some truly terrifying images but just missed because the means of seeing the dead people came with wearing special glasses, and this list is organic if nothing else.

Saturday Night Live veterans Bill Murray and Dan Aykroyd were at the top of their games when this supernatural comedy became an icon of 80s movies. “Who ya gonna call” remains a catchphrase we still use today, a quarter of a century later. Second City TV alum Harold Ramis (who would become a fine filmmaker in his own right) and character actor Ernie Hudson would make up the rest of the Ghost Buster team, while Sigourney Weaver made for one hot femme fatale, getting possessed by a demon in her refrigerator. Usually the demon in my refrigerator looks a lot more like cheesecake (although come to think of it, she had a couple of scenes where she looked an awful lot like cheesecake). Rick Moranis, he of SCTV and Honey I Shrunk the Kids fame was designated comedy relief. New York was threatened by a supernatural event of biblical proportions, not to mention a gigantic Sta-Puft marshmallow man, and only Egon, Stantz, Venkman and Winston stand in the way. Together with their proton packs and containment devices, they take the horror elements, temper it with a little science fiction and make it dang funny. The movie did spawn a sequel as well as a couple of animated kiddie shows centered around Slimer, the ghost that, ummm, slimes Venkman in the original. Fans of the movie will be gratified to note that the long-rumored much-delayed third movie is finally greenlit and will be filming this fall for a Christmas 2012 release.

Made during the height of the screwball comedy era, this is the movie where Cary Grant perfected his screen persona of the debonair and charming rake. George and Marion Kerby, a pair of gadabouts, played by Grant and Constance Bennett, live the good life during the Depression but its cut short when they die in a car accident in their beloved speedster. The car is ultimately purchased by Cosmo Topper, played by Roland Young, who also has an accident but survives; however, the result is that he can see the Kerbys and they take it as their life’s ambition….um, make that afterlife’s ambition…to turn around the stuffy Topper’s prim and proper life and teach him the meaning of fun. The point was that life was too short not to live it to the fullest, a point that may have been lost on Depression-era audiences who were struggling just to keep their families fed. Still, Topper is and remains an iconic movie of the era, one that would inspire not only several sequels of its own (although none with Grant, who had become too big a star by that time) but also a TV series in the 50s, a TV movie and now, a remake starring Steve Martin that is reportedly going to begin filming soon.

This not only has the distinction of being one of the greatest “I See Dead People” movies of all time, it is also one of the greatest baseball movies of all time as well. Kevin Costner became a baseball legend for this movie as a farmer who hears voices in his cornfield, telling him to build a baseball stadium…well, actually it says “If you build it, he will come.” He turns out to be Shoeless Joe Jackson, who eventually brings the rest of the Black Sox, and then later other dead baseball players as well. The movie uses baseball as a metaphor for America, and addresses all sorts of issues but primarily the regaining of lost innocence. Not everyone could see the ghosts, but those that needed to did. With a cast that included Amy Madigan as Costner’s long-suffering wife, Timothy Busfield as his skeptical brother-in-law, James Earl Jones as a reclusive writer from the 1960s and the great Burt Lancaster as a doctor and ex-ballplayer, the movie touches a chord in every heart, American or not, who sees it. Certainly I still get misty every time I put it on. The cornfield ballpark that the production crew built in Iowa still stands as a tourist attraction, although it was listed as for sale as of July 2010. 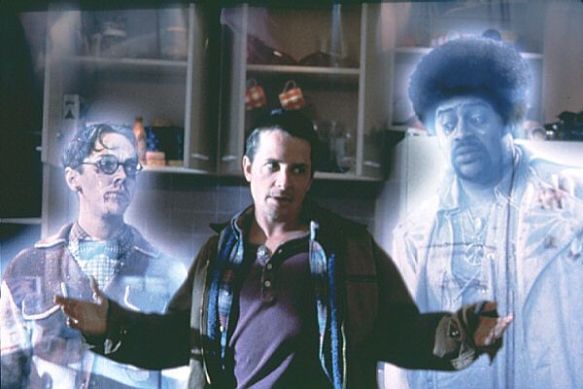 A pre-Lord of the Rings Peter Jackson directed this cult favorite. It served as something of a bridge between his early horror films, with the black humor of movies like Bad Taste and the visionary effects sense of the LOTR trilogy. Michael J. Fox starred as Frank Bannister, a charlatan who offered to rid people of ghosts haunting their homes by using fake Ghostbuster-esque science. The kicker was that he really was psychic and could see ghosts, thanks to a near-fatal car accident (near-death experiences are a favorite way for Hollywood to explain why living characters can see and interact with the dead). He used a trio of ghostly accomplices to scare clients into believing they were being haunted. Yes, it was a bit of a scam, but one case would lead Frank to take on a malevolent ghost bent on killing the living. Jeffrey Combs had a memorable turn as a deeply disturbed FBI agent who was on Frank’s trail, and Chi McBride, John Astin and Jim Fyfe played Frank’s ectoplasmic sidekicks. The movie has a bit of a quirky side to it, but the combination of Fox’s likability, the terrific-for-their-time special effects and the mythology of the film’s reality make this a favorite that I like to revisit whenever it plays on cable, which it does frequently. 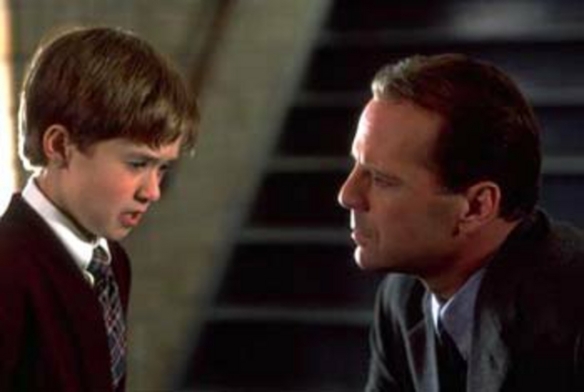 The movie that gave this Top Five it’s title and with one of the best twist endings ever is director M. Night Shyamalan’s magnum opus, a movie whose success he hasn’t been able to match either artistically or commercially since. Young Haley Joel Osment plays a disturbed boy who is able to see the dead; Bruce Willis plays a child psychiatrist whose life was destroyed by a patient of his (played in a brief but memorable turn by Donnie Wahlberg) who is trying to help young Cole (Osment’s character). Toni Collette plays Cole’s mom in a role that helped establish her as an important actress. The film served as a career resurrection for Willis, whose Die Hard-style action movies were falling out of vogue. It also established Willis as a more mature actor whose performances can be surprisingly nuanced given the right director. Some of the imagery is pretty terrifying, but the movie turns some pretty interesting corners before the final jaw-dropping scene which had audiences worldwide blindsided. Many believe it to be one of the best movies of the 90s and in many ways, it is as iconic to that decade as Ghostbusters was to the 80s.