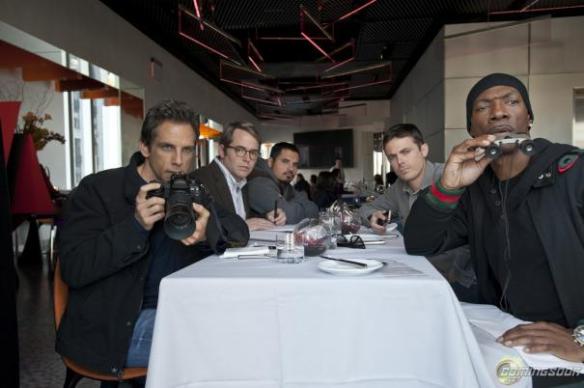 When the staff that work in an exclusive Manhattan apartment tower discover that their pensions have been stolen by a Wall Street billionaire who lives in the penthouse, they’re at first stunned. Some of them have nothing but their pensions to rely on and it appears that the old fraud is going to get away with it. However, the staff have a couple of aces in the hole; intricate knowledge of the tower and a school chum of the concierge who happens to be a professional thief. Even with a full house of FBI agents and security, these amateurs might have the best hand after all.

See the trailer, clips, interviews, promos and a featurette here.

(New Line) John Cho, Kal Penn, Neil Patrick Harris, Tom Lennon. The two stoner buddies have been apart for six years following their last adventure and have moved off into other circles, other friends. However a mysterious package that arrives at Kumar’s house begins a series of misadventures including the search for the perfect Christmas tree, the return of Neil Patrick Harris from the dead and the shooting of Santa Claus.  It’s quite possible that this movie will be much funnier while on drugs. Then again, most movies are. Besides, any movie with NPH in it is all right by me.

(Sony Classics) Michael Shannon, Jessica Chastain, Katy Mixon, Kathy Baker. A quiet family man in the Midwest begins to have terrifying dreams. Terrified of what the dreams may signify, he begins to work obsessively on a storm shelter in his backyard. His odd behavior begins to put a strain on his marriage and puzzles his friends and family who begin to question his sanity, but if he’s right the consequences may be far more dire than a trip to the mental institution.