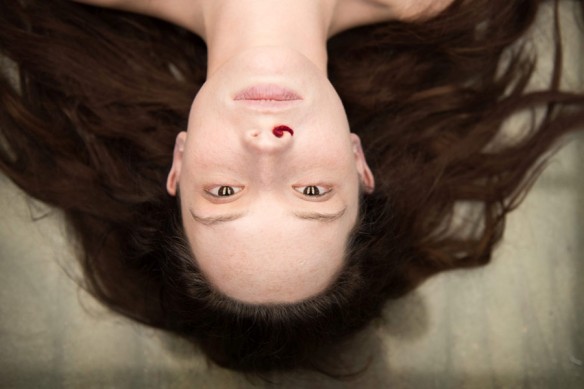 The face of death.

When we die often the most reliable evidence for how we died is our actual bodies. The things scraped from under our fingernails, the DNA inside our mouths, the lesions in the skin and the damage to internal organs all tell a story. That story not only tells the coroner  how we died but also how we lived.

Tommy Tilden (Cox) and his son Austin (Hirsch) run the Tilden mortuary (in the family for generations) in a small Virginia town. They also act as the town’s medical examiners. It’s just been the two men since Tommy’s wife passed on several years ago, but Austin has a pretty girlfriend named Emma (Lovibond) who unbeknownst to Dad has been urging Austin to follow his dreams which don’t include being a medical examiner in a small town. Austin has been trying to find a way to break the news to Tommy when Sheriff Sheldon (McElhatton) brings in a body that he needs autopsied right away, even though it’s well past business hours.

Jane Doe (Kelly) was discovered buried in the basement of a home where a brutal mass murder took place. What she was doing there is a mystery as is what relation she might have had to the killings; the Sheriff needs answers and is relying on Tommy to give them to him quickly. Tommy agrees to stay and even though Austin and Emma were about to leave on a date, Austin blows her off to help Dad out, not wanting him to be left holding the bag on what looks to be a rough autopsy.

For one thing, the body appears to be pristine – no evidence of external wounds or even a clue as to what the cause of death might be. Once the two open up the body though some unsettling facts begin to come to life; the victim’s tongue was severed, for one thing. Her lungs are black as if she had inhaled smoke. Also her wrists and ankles are broken even though there’s no external bruising.

As they perform the autopsy a bad storm hits town but now some odd things are happening. The radio changes stations on its own. The doors to the storage units for the bodies in the morgue open on their own. And there’s evidence that the dead may be walking around again and no Sheriff Andy to save the day. When things at last get to be too creepy, Tommy decides to get out (which Austin had been urging him to do for some time) but it’s far too late now. They are trapped inside the morgue with a supernatural entity who may have a bone or two to pick with them.

Ǿvredal is the Norwegian director best known for The Troll Hunter, a very different kind of horror film. This one has less of a sense of humor than his last movie and is his first English language film. It’s a whiz bang effort that relies much more on creepy atmosphere rather than over-the-top effects; like that film, there isn’t a ton of character development either.

One of his smarter moves was to cast Emile Hirsch as Austin. Hirsch is an often underrated actor who given some of his performances should at least be in the top echelon of actors but for whatever reason hasn’t gotten that kind of recognition. He plays Austin as a pretty decent guy who wants to do the right thing but has a bit of a backbone problem. Cox is one of the most respected character actors out there with such roles as Hannibal Lecter (he originated the role in Manhunter) and General William Stryker (from X-Men 2). His Tommy Tilden is very proud of his son, a pride that doesn’t allow him to see that his boy is moving down a different path than he. I would have liked to have seen more of the dynamic between them but once the horror action starts basically that element is left behind.

Otherwise, the movie is extremely well-written and creates a mythology that is easy to follow and yet is original. The ending is a bit of a letdown but not much of one; it certainly leaves room for a sequel and I have to admit that there is some appeal in the possibility that this might become a horror movie franchise, although I’ll grant you that to my mind there aren’t a lot of places a franchise can go to with this concept. The concept here – following a corpse through the autopsy process with terrifying results – is a solid one that is unique so far as I know.

The scary stuff starts pretty quickly into the movie but it doesn’t feel rushed. It builds, rather, and it builds fast. Once it gets going even horror veterans are going to find their hearts pounding and their adrenaline rushing through their systems. It’s legitimately scary and those who are sensitive to gore and nudity (the corpse of Jane Doe is naked throughout) are well-advised to consider carefully whether this is the film for them.

There has been a renaissance in horror movies over the past decade or so and Ǿvredal is one of the leading lights of it. We have seen some movies that are sure to be classics of the genre over the past three or four years in particular and this one is likely to be one of them. It’s a great time to be a horror fan and movies like this one are the reason why.

REASONS TO GO: If you love scary movies, this is the one for you. Terrific performances by Cox and Hirsch drive the film.  Ǿvredal creates a terrifying atmosphere that doesn’t relent during the entire film. Ǿvredal doesn’t wait too long to get into the thick of the horror.
REASONS TO STAY: This may be too intense for some.
FAMILY VALUES:  There are some extremely gruesome images, plenty of foul language, graphic nudity and some intense violence.
TRIVIAL PURSUIT:  After seeing The Conjuring, director Ǿvredal told his agent that he wanted to do a horror film for his next project and to find him a good script. This is the one that his agent brought to him and Ǿvredal was immediately taken by it.
CRITICAL MASS: As of 2/6/17: Rotten Tomatoes: 85% positive reviews. Metacritic: 64/100.
COMPARISON SHOPPING: The Witch
FINAL RATING: 9/10
NEXT: Chapter & Verse