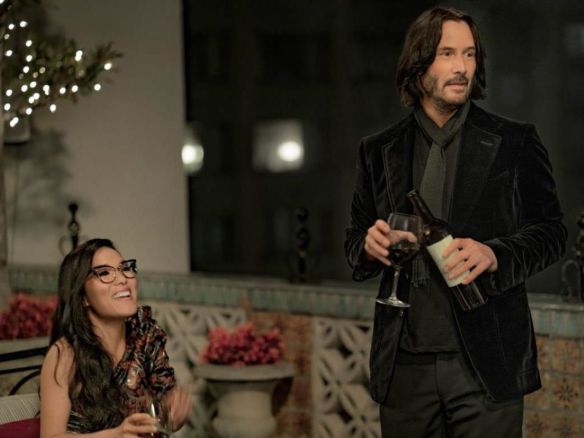 A perfect example of Keanu-worship.

After a glut of romantic comedies in the last two decades, the big screen has taken a break from making them, largely because most of the rom-coms that came out over that time were essentially cookie cutter images of each other with little new to recommend them. In the last year, Netflix has attempted to fill the gap with varying results.

Sasha Tran (Wong) is an L.A.-based celebrity chef who is opening up a new restaurant in San Francisco where she grew up. Back then, her best friend was Marcus Kim (R. Park) who she lost her virginity to back in the day – in a Toyota Corolla no less. She employs Marcus’ dad (Saito) to install her HVAC system and as it turns out, Marcus still works for his Dad. As it also turns out, Marcus still plays in the same band he did in high school, still lives with his dad and still drives the same Toyota Corolla (which if I were Sasha might make me a little queasy).

The two drifted apart over the years and are both currently seeing other people, but the sparks are still there. Are the two condemned to each other’s Friendzone or will those sparks ignite the flames that have always been just beneath the surface?

Wong and Park, who both co-starred in the sitcom Fresh Off the Boat, co-wrote the movie with Michel Golamco and there are moments when their natural comic talents shine through but the movie is also riddled with rom-com clichés that sabotage their best intentions. The chemistry between Wong and Park is surprisingly weak and one feels that Sasha and Marcus would be better off as friends, so the rooting interest for a successful romance is out the window. Still, a strange but glorious cameo by Reeves playing a parody of himself, and Park’s strange but funny raps keep the movie from being a total waste. Rom-com fans without high standards will doubtlessly eat this up, particularly if they loved last summer’s Crazy Rich Asians which is a far superior movie but certainly had a hand in getting this greenlit.

REASONS TO SEE: There are some truly hilarious moments.
REASONS TO AVOID: A little bit on the cliché side.
FAMILY VALUES: There is some sexual content, profanity, brief drug use and some violence.
TRIVIAL PURSUIT: While in the film Randall Park and Ali Wong are childhood friends who are roughly the same age, in reality Park is eight years older than Wong and he founded the theater troupe at UCLA that she later joined.
BEYOND THE THEATER: Netflix
CRITICAL MASS: As of 9/6/19: Rotten Tomatoes: 90% positive reviews: Metacritic: 64/100.
COMPARISON SHOPPING: Crazy Rich Asians
FINAL RATING; 6/10
NEXT: The Chambermaid