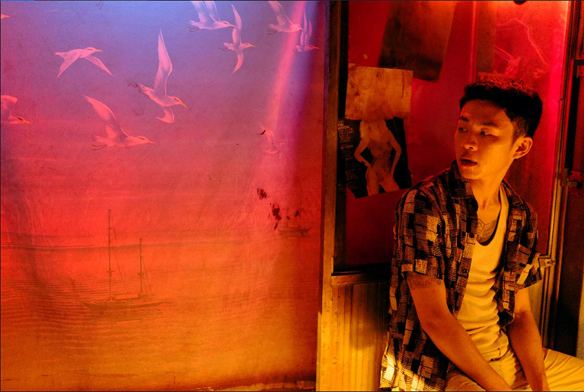 Funny thing about dreams; they’re often more real to us than what we perceive as reality. Dreams reveal our true selves – the good, the bad and the ugly. Dreams can be beautiful, but dreams reveal the lives we wish we had led.

Luo Hongwu (Huang) is returning to the Southwestern China town of Kaili which he had lived in much earlier days of his life. He has returned there after the death of his father, the ne’er-do-well gambler nicknamed Wildcat (Lee). Luo finds a photo of a woman (Tang) hidden in a broken clock and vaguely remembers a relationship with someone who looked like her – and her name might have been Wan Qiwen. He goes in search of the woman.

Along the way he interacts with a rogue’s gallery of oddball characters from a crusty hairdresser (Chang), a precocious 12-year-old boy who lives in an abandoned mine, and assorted pimps, thieves, hookers, thugs and cops. Luo finds himself in a movie theater and sits back to watch the movie in 3D, putting on his 3D glasses. That’s when dreams become reality, and vice versa.

If you think I’m being deliberately vague about the plot, you’re not wrong. The thing is that this is something of a stream-of-consciousness film which has a kind of dream logic to it in which the laws of physics might just be suggestions. Director Gan Bi hit the critical radar in 2015 with his debut feature Kaili Blues which contained a single 40-minute tracking shot. He outdoes himself here with one that lasts close to an hour – in 3D yet – that takes up the entire second half of the film. It is a magnificent technical achievement but in the immortal words of Ian Malcolm (as spoken by the equally immortal Jeff Goldblum) he was so busy figuring out if he could he didn’t stop to think whether he should.

Bi is a visual wizard and the shots are so thoughtfully framed, so beautifully lit and the production design so exquisite that you realize that he’s heavily influenced by the great Chinese director Kar-Wei Wong. It’s a beautiful movie to watch and if you’re tempted to avoid reading the subtitles altogether and just let yourself float among the images, I wouldn’t blame you. In fact, I think that’s a good way to approach this movie because the dialogue is absolutely superfluous.

Movies in many respects are dreams given form and I don’t know about you but some of my dreams would make shitty movies. This is a long (nearly two and a half hours), slowly paced and often confusing film that, like a dog trying to settle down in its bed for a nap often turns round and round on itself before settling down, only to get up again and do the same thing all over again. In that respect this isn’t a movie for everybody except the most esoteric and avant garde of filmgoers. Mainstream audiences aren’t going to like this very much.

There is a very Noir tone to the film which is welcome; it is set in a city where the rainfall is constant, like Seattle on steroids. As a result, there is a sense of decay and entropy to the surroundings where water is wont to break through walls and create nifty little waterfalls. Most of the characters smoke like chimneys and not just because everyone in China seems to be a chain-smoker but because smoke and water go together as motifs. Incidentally, despite the title there is no connection here that I could see with the classic Eugene O’Neill play.

This should be approached as fine art; very subject to interpretation. The story isn’t the important thing which is something that will have most mainstream moviegoers headed for the exits. What matters here is the tone, the vision, the feeling and the thoughts provoked, but don’t say we didn’t war you about the whole art thing.

For readers in Miami the movie is currently playing this week at the Cinematheque before taking up residence at the AMC Sunset Place. Keep an eye for the visual cues as to when to put on your 3D glasses; there’s a brief graphic informing the audience to put on their glasses when you see the main character put on his.

REASONS TO SEE: The shot composition is outstanding. There is a definite Noir feel to the film.
REASONS TO AVOID: It’s a bit of a slog, figuratively and literally.
FAMILY VALUES: There is a good deal of sensuality and a crazy amount of smoking.
TRIVIAL PURSUIT: Chinese moviegoers felt misled by the marketing campaign which billed the film as a Noir mystery and less as an art house experience leading to a good deal of Internet backlash.
CRITICAL MASS: As of 4/30/19: Rotten Tomatoes: 93% positive reviews: Metacritic: 88/100.
COMPARISON SHOPPING: Into the Void
FINAL RATING: 7/10
NEXT: Postal (2019)