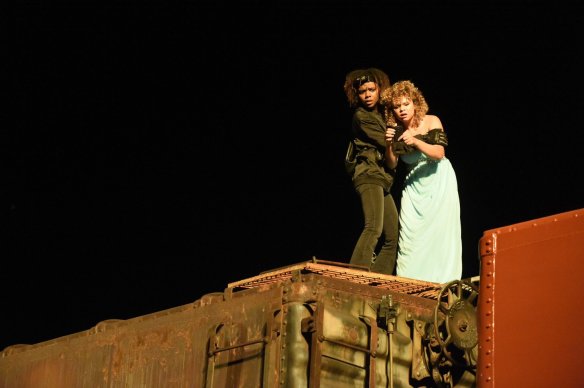 Deidra and Laney are on top of the train situation.

When you’re a single parent, making ends meet can be no easy task, especially if your employment options are limited and your ex isn’t paying the child support they owe. It’s a difficult situation, one which can go from precarious to catastrophic in a single moment.

Deidra (Murray) is the class valedictorian in a small Idaho town where she is the oldest of three children, including her middle sister Laney (Crow) and her youngest brother Jet (Gray) who likes to play with action figures. They live on the wrong side of the tracks (literally; the train tracks border their back yard) with their mom Marigold (Nicolet) who works at a Best Buy-type electronics store.

One afternoon she unexpectedly loses it at work and goes on a rampage, smashing a big screen TV to pieces. Her erstwhile employer not only presses charges, they insist on making her out to be a domestic terrorist, raising her bail to unaffordable heights. There are bills to pay and Deidra realizes that not only can they not afford to keep food on the table or the electricity turned on, a social welfare worker (McInroe) is threatening to move Jet into a foster home if they can’t demonstrate that the environment is suitable.

In desperation, Deidra visits her ex-con dad Chet (Sullivan) who works as a technician for the railroad. He only has $13 to give them but he gives Deidra something much more valuable; an idea for a way out. He offhandedly mentions that there have been a spate of train robberies lately that have gone unsolved and the railroad brass has sent a security specialist named Truman (Nelson) to investigate. Vaping incessantly, he also has a checkered past in which he’d been drummed out of law enforcement for excessive use of force. He is clearly not a man to be trifled with.

Nonetheless Deidra figures out that she can hop aboard a freight car, break the lock and take whatever she can find in them. She knows she can’t do this alone so she enlists her sister Laney – who is embroiled in the Miss Teen Idaho pageant which she had only entered to support her “friend” Claire (Markham) who immediately turned her back on Laney when Laney was also selected as a finalist . Laney is at first reluctant but when things start to get desperate she agrees to help.

Deidra also enlists her ex-boyfriend Jerry (Olivier), who she dumped for selling pot, to sell the stolen merchandise on E-Bay. She’s set a goal of $12,000 which would be sufficient to catch them up on their bills and get their mom out on bail. She’s also pressured by the guidance counselor Ms. Spencer (Zamata) who believes that if she can get just one student out of town on a scholarship she’ll get promoted and Deidra is her best shot at it. With all this going on, the social worker and the railroad dick both sniffing around their lives and her dad trying to make up years of neglect to his kids, can this high school senior and her sister pull off the larceny they need to get their family whole again?

Those who have paid attention to my reviews over the years should by now realize that I’m not a big fan of the programming on the Freeform cable network. This movie positively reeks of the things that really make me frown about the cable network’s offerings. The script is absolutely ludicrous; for one thing, can you imagine a mother, particularly one who realizes she is the sole support for her kids, melting down like that and then treating her jail time as a vacation? None but the most irresponsible of parents would react that way and even then if they were of that nature they likely would have had their kids taken away from them long before. For some reason (and this goes back a long ways before Freeform was a gleam in Disney’s eye) kids movie/TV show writers delight in making adults be absolutely incompetent so that they can show how kids can solve their own problems.

Of course, normally Freeform and other Disney outlets don’t approve of using crime to solve the problems that their heroes and heroines are grappling with, but these are interesting times. For the working class, these types of conditions are reality and while the mom being hauled off to jail would in reality have ALL the kids taken to foster care, life for the working class particularly in rural towns is bleak and hopeless in a lot of ways – you can see why they chose to vote for the maverick outsider when it seemed like neither political party gave a rat’s behind about their situation. The movie reflects that frustration.

Murray, who also starred in the CW series Riverdale this spring, is a find. She plays Deidra as smart without being condescending and compassionate while being fierce. She avoids the clichés that so many young adult actresses fall into. Sadly, the material she has to work with here isn’t really up to her performance.

While the movie is entertaining for the main part, it’s clearly meant for a young adult audience and will offer little for audiences with a “two” or more as the first number in their age. I’m of the perhaps misguided belief that you can write terrific material for young adults without talking down to them as this movie does; it creates a world where the right thing to do is the wrong thing to do also. While empowering the girls in the movie, it also empowers them without consequences to their actions, something that really doesn’t happen often in the real world, even for adults. I applaud the filmmakers for making this an inclusive film that looks at the real economic situations faced by working class families everywhere; I just wish they could have presented real solutions and real information that kids who find themselves needing to be empowered can do so without fear of being jailed for it.

REASONS TO GO: Murray avoids young adult actress clichés. There is a decent entertainment value here.
REASONS TO STAY: The movie has a Freeform/Afterschool Special vibe (not necessarily a good thing). The ludicrous plot is clearly meant for youngsters, not adults.
FAMILY VALUES: There is some mild profanity and some just as mild violence.
TRIVIAL PURSUIT: The high school scenes were filmed at Judge Memorial Catholic High School in Salt Lake City, Utah.
BEYOND THE THEATERS: Netflix
CRITICAL MASS: As of 6/6/17: Rotten Tomatoes: 93% positive reviews. Metacritic: 65/100.
COMPARISON SHOPPING: Hell or High Water
FINAL RATING: 5/10
NEXT: Meghan Leavey