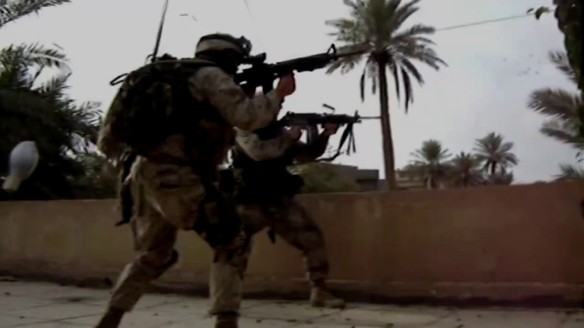 The real battle begins when they get home.

As a general rule, we tend to honor our combat veterans. We appreciate the service they do for us, putting their lives in harm’s way and triumphing. They represent the best aspects of our society – the sacrifice that we make for the freedoms we enjoy. We literally can’t honor them enough for what they have done and continue to do.

But in truth we don’t truly understand; not really. We can mouth platitudes as I have just done but unless you’ve served in a combat situation, there’s simply no way for us to really empathize for what they’ve been through. We haven’t taken fire, seen our buddies shredded by shrapnel, watch our mentor take a gunshot through the head, felt a bullet whizzing by that missed us by a hair’s breadth and slammed into the face of the guy behind us. We haven’t taken bullets for our brothers nor have we watched our brothers take one for us. We don’t know.

For that reason, we make war with impunity and send our kids out as kids but see them come home as warriors. Once they get home, we pat them on the back, tell them well done and expect them to get on with their lives as if nothing has happened. I’m not sure where that mindset came from but the fact of the matter is that nobody who goes to war comes home unchanged. It’s not possible. That change often can be disturbing; it is common for returning veterans to have severe insomnia, post-traumatic stress disorder (PTSD), nightmares (and occasional hallucinations), chemical and alcohol dependency and difficulty fitting back in to society. The incidence of homelessness among vets is staggering as is the divorce rate. Even more disturbing is the high suicide rate among veterans.

This documentary focuses on the Marine Corps Fox 2/5 company, one of the most decorated in the Corps. They have an illustrious history and those in it wish to pass on their honorable record to the newest members of the company. Josh Hisle was one of those in Fox 2/5 and he is essentially the main focus, although not the only one. We see them through two tours of combat; the first being the invasion of Iraq in 2003 followed by the Ramadi campaign in 2005. In the first they are viewed by the locals as liberators; in the second they are viewed as invaders.

The combat footage is at times harrowing and we get a real sense of how men react to combat; some of them have big smiles on their faces as combat can be exhilarating; others scream war cries and we are reminded that combat can bring out the savage within us. In both cases we get a sense of the emotional toll of war, more than any other documentary has brought us close to that I can remember.

More poignant than that though are the stories of the warriors returning home; Those who spend sleepless nights in their refuge; Hisle talks about being unable to sleep until he’s sure everyone in his apartment complex is asleep. He sits on his front porch drinking and with his head decidedly not in a good place. However, Hisle is one of the lucky ones; he has a creative outlet in songwriting that helps him to work out some of his frustrations.

And his music is really, really good; good enough to attract the attention of legendary rocker Neil Young who invites the young vet to appear in onstage with him and his group Crosby, Stills, Nash and Young as well as in his documentary CSNY: Deja Vu. Walt Michael, one of the founders of Common Grounds on the Hill, a group dedicated to highlighting the things that are common to all of us regardless of culture, heard some of Josh’s music and wanted him to attend one of their festivals as a music teacher. Josh was so impressed and was so moved that he convinced Walt to create a Veteran’s initiative, securing funding to get veterans in need of healing to a Common Grounds festival. Josh is convinced that Common Grounds has helped right his life and he has become a passionate advocate of it. This will be the fifth year that the Veteran’s initiative will be in effect.

In fact, several veterans have committed to creating positive changes for their fellow veterans. Matt Lorscheider, who served with Josh in the 2/5, is working with New Directions, a charitable foundation that takes homeless veterans off the streets, gives them vocational training, substance abuse counseling and helps them secure affordable permanent housing. Kenny Bass who was disabled during his tour of Iraq was told by his Veterans Administration doctor that he needed a service dog – but that is something not covered by his benefits. Kenny, on disability and a fixed income, basically had to save every penny to afford the $25,000 needed to purchase a service dog who has helped the quality of life for the veteran immensely. He and his war buddy Josh Rivers decided to turn his difficulty into a positive and founded their own charitable foundation Battle Buddies which helps veterans in need of service dogs be able to purchase one.

This isn’t a political film, although there is a decidedly anti-war skew here among the veterans but one can hardly blame them for that – nobody would want anybody else to go through what they have gone through. Hisle was blunt about his criticisms about certain decisions made during the war; ‘We were trained killers. You don’t send killers to keep the peace. It doesn’t work.” He has a point.

The one small complaint I might have had about the film is that they could have edited it down a bit more; the combat sequences while harrowing do get repetitive and I’m not 100% certain that we needed all of them in the film as the running time is a bit long for this kind of film. Less is more, generally although I would bow to the wisdom of Hisle and the other veterans behind the making of this film as to how much war we civilians need to see.

To a man none of the vets regret their service and would go back in a heartbeat – but only for the sake of those they served with, not for the reasons they were sent there in the first place. This is truly an inspiring documentary that shows you that these Marines are truly leaders of men. They have the will and the training to do tremendous things in the name of war. They also have the drive and the leadership to do amazing things in the name of peace. Our veterans are a resource this nation is truly squandering at present and all of us, the citizens of this country, are partly to blame. We have dropped the ball for those who have sacrificed so much and we need to give our veterans more than platitudes. By all means, do see this movie and be inspired but let that inspiration be more than just lip service; donate to these excellent causes that are helping veterans every day heal and resume their lives. That’s a way of showing your gratitude that truly matters.

REASONS TO GO: It’s truly inspiring to see veterans rising up to help one another – and truly depressing that our own government is not. The exhilaration and savagery of combat is depicted graphically. Hisle’s music is actually really good. In many ways the post-homecoming stories are more poignant.
REASONS TO STAY: The movie could have used a bit more editing
FAMILY VALUES: There is plenty of profanity and scenes of war violence.
TRIVIAL PURSUIT: Much of the footage from the Iraqi conflict was taken by the embedded press with USMC Fox 2/5.
BEYOND THE THEATERS: Amazon, Google Play, iTunes, Vimeo, Vudu
CRITICAL MASS: As of 4/3/17: Rotten Tomatoes: No score yet. Metacritic: No score yet.
COMPARISON SHOPPING: Stop-Loss
FINAL RATING: 9.5/10
NEXT: Rings