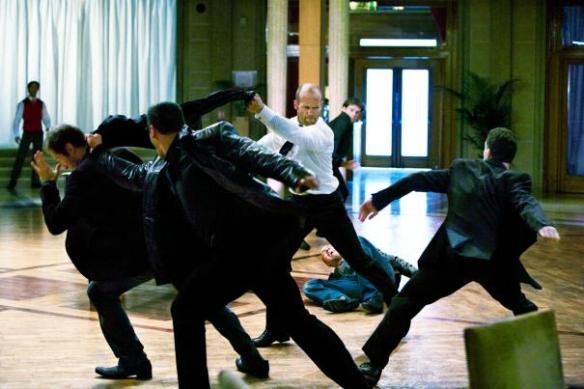 Transporters may come and transporters may go. The nature of the job is that the turnover is plenty high. One thing’s for certain – you can’t keep a good action hero down.

Frank Martin (Statham) has retired to his beloved French Riviera where he spends most of his time fishing with his friend Inspector Tarconi (Berleand). It’s a good life and Frank doesn’t miss the car chases, the fights with half a dozen thugs or getting shot at from a helicopter. Who wouldn’t?

But his reputation remains and when a colleague botches a job, Frank is forced back into the life by Johnson (Knepper), a mysterious and shady sort who has attached an explosive device to his wrist. Should Frank venture more than 75 feet away from his car, the device will detonate and Frank will be everywhere.

His job is to transport the spoiled young Valentina (Rudakova) from Marseilles to Odessa. As it turns out, she is the kidnapped daughter of the Ukrainian Environmental Minister (Krabbe) who is being pressured by Johnson’s employers to allow toxic waste to be dumped in the Ukraine. Hey, what’s a little more toxic waste to a country which already has Chernobyl?

Frank must use all his skills and break all of his own rules to survive the double dealing, backstabbing Johnson, and it doesn’t hurt that he begins to fall for the lovely Valentina despite her annoying quirks, or perhaps because of them.

This is, strange as it may seem, the highest grossing film of the series which is mystifying to me because it’s such an obvious retread of the first from a plot perspective. The only real twist is the exploding wristband thing, and that’s been done before, only as a necklace in The Running Man and it was far cooler to see someone’s head getting blown off of his neck in my humble opinion.

That said, this is still a Jason Statham movie and Statham is my favorite action star at the moment. When he gets the right material (as he does in The Bank Job and The Italian Job) he has a surprising range. When he doesn’t, he’s still interesting and enigmatic enough to be watchable. Perhaps all of the scripts he should accept from now on should have the word “job” in the title.

A movie like this one lives or dies on its action sequences, and for the most part it delivers. My issue with them is that some of the fight choreography is choppy and doesn’t flow really well like a good fight sequence should. There should be an organic feel to it; Asian stunt coordinators understand this better than anyone, and they could have used one here. I get the distinct impression that the botching of these sequences came in the editing process; a little too much artistic license.

However, the concepts are solid and the driving stunts are particularly thrilling, which is what you want when your lead character is supposed to be one of the best in the business in that regard. I liked the first movie in the franchise, was indifferent towards the second and am the same about this one. It’s disposable entertainment that will be forgotten five minutes after you turn off the TV, which isn’t necessarily a bad thing.

WHY RENT THIS: Jason Statham.

WHY RENT SOMETHING ELSE: Some of the fight sequences were a little choppy and the choreography didn’t flow as it should have.

FAMILY VALUES: As you might expect, there is a plethora of violence, but there is also some sexuality and a bit of drug and alcohol use. Definitely for mature audiences only.

TRIVIAL PURSUIT: Rudakova was a hairdresser with no previous acting experience before producer Luc Besson encountered her on a New York street and urged her to get acting lessons before coming in for an audition, which she did.

NOTABLE DVD EXTRAS: There’s an interesting feature on the real life transportation of people and information by people like Frank Martin, only not as cool or violent.