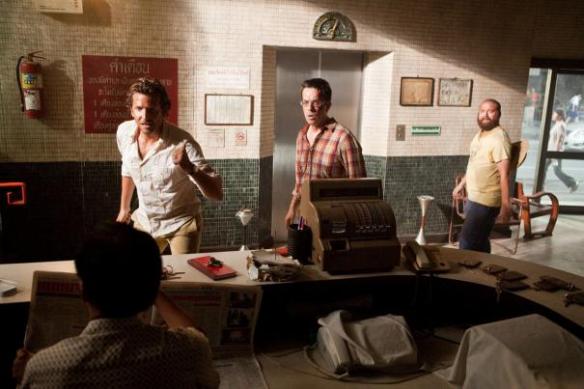 One night in Bangkok makes a hard man humble.

Nothing exceeds like excess, and what happens in Bangkok, stays in Bangkok. I imagine if you look hard enough, you can find a cliché to fit any situation – and if you can’t find one that works, just make one up.

Stu (Helms) is getting married to a beautiful Thai girl (Chung) whose father (Sirichanya) doesn’t really approve of Stu or of his dental profession. It is determined that the wedding will take place in Thailand at a lovely island resort. Of course, Stu’s buddies Doug (Bartha) and Phil (Cooper) are going to go, although Phil is grousing about the lack of a bachelor party. Considering what happened in Vegas for Doug’s celebration, it’s understandable why Stu is a bit leery.

However, Doug’s brother-in-law Alan (Galifianakis) has been putting intense pressure to be invited to the wedding, their exploits in Vegas being the highlight of his life. To keep the peace, the three of them venture into Alan’s room (“I’m a live-in son,” he tells them) at his parents’ house which is a shrine to forbidden Vegas memories where Stu reluctantly invites him and thus the Wolfpack is reunited.

Added to the mix is Stu’s soon-to-be brother-in-law Teddy (Lee), a prodigal 16-year-old about to graduate at Stanford in pre-med with an eye to becoming a surgeon, as well as a classically trained cellist. Alan takes an immediate dislike to the boy, considering him an interloper on Alan’s turf. Stu, still sulking over the lack of a bachelor party, proposes that the guys all head out to the beach for a single beer and a bonfire. There they all go, ready to cast one final toast to Stu’s freedom.

They wake up in a seedy hotel with no idea where they are, how they got there and what they did the night before. Alan’s head is shaved. Stu has a Mike Tyson tattoo on his face. All of them have raging headaches. And all that’s left of Teddy is a severed finger with his Stanford ring floating in a bowl of cold water. There is also a Capuchin monkey and Mr. Chow (Jeong), the neurotic Chinese gangster from the original The Hangover.

They have to find Teddy before the wedding – there’s no way that the doting father-in-law will ever allow the marriage to take place without the apple of his eye, Teddy. To go there, the Wolfpack must brave the seedy bars and strip joints of Bangkok, the palaces of power and a singing performance by Mike Tyson. That’s right, I said singing.

If the plot sounds familiar, it’s because it is. The sequel is essentially the first movie transplanted to Bangkok in the sweltering tropics. There are some different running jokes (we don’t see Jeong’s bare tush but we see full nudity of a bunch of Thai transvestites) but the song remains the same.

The main leads here – Cooper, Helms, Galifianakis and Jeong – are all pretty amiable and Cooper looks like a romantic lead in the making. Galifianakis looks like he has the most potential in the group. His timing is impeccable and he makes Alan into a somewhat disturbed individual but anything but a caricature. Helms, from “The Office,” also has his moments and the frenetic Jeong has some as well.

The problem here is that the producers took the safe route. There is little variation in the routine that made the first movie so enjoyable. The good news is that the original routine worked pretty damn well, and we haven’t had time to get tired of it yet. There are a lot of great set pieces and really funny jokes, mostly uttered by Galifianakis. In many ways it’s his movie and the others are just reacting to him.

There is some waste here too – Giamatti as a criminal boss lacks the bite of his work in Shoot ‘em Up and Tambor basically appears in only one scene. And this movie is crude. I’m talking crude enough to make the Farrelly Brothers wince and Judd Apatow murmur “Too far man, too far…” Certain mainstream critics have been criticizing the movie for it but c’mon, if you saw the first movie you have to know what was coming. Don’t write your review for the Tea Party bluenoses.

So does it deserve the huge box office numbers it’s been getting? Yes and no. Obviously, people are looking for the familiar in their multiplexes and certainly this will give the people what they want in that regard. I have no objection to the concept of a The Hangover Part III but I sure hope they put some kind of variation in the formula when they make that one.

REASONS TO GO: The movie is funny more often than it is not, which is an accomplishment these days. Helms, Cooper, Galifianakis and Jeong rock.

REASONS TO STAY: Pretty much the first movie done in Bangkok instead of Vegas,

FAMILY VALUES: Oh, the language. It could have been the sexual situations and nudity. Maybe it’s the violence, or the drug use. In any case, this got an R rating for a reason.

TRIVIAL PURSUIT: Former President Bill Clinton visited the set in Bangkok, leading to rumors that he was performing a cameo in the movie but this proved to be erroneous. Bradley Cooper stated on several talk shows that he actually expressed interest in doing a sequel to The A-Team if one was ever made.

HOME OR THEATER: It is not mandatory to see this in a theater, but you may want to so that you can understand the water cooler references afterwards.