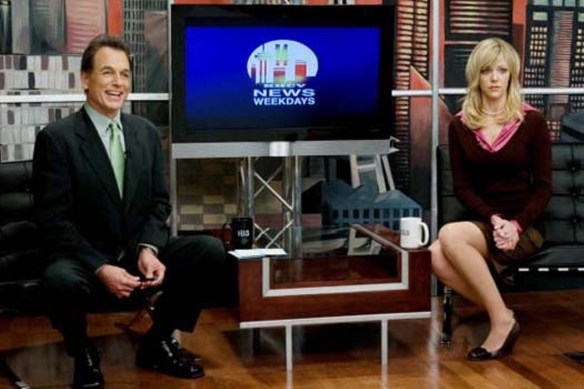 One of these morning show hosts woke up on the wrong side of the bed this morning.

There is some truth to the thought that in order sometimes to start over one must first hit rock bottom. The truth is that we are often too afraid to lose what we have to take a shot at what we might get, even if that is so much better than what we already have. Loss can be a great motivator.

Sylvia (O’Kelley) does the weather on a morning show in Seattle. Her boyfriend is Dale (Harmon), the handsome if empty-headed anchor. Sylvia is having a very bad day. She’s discovered that Dale is cheating on her with Jane (Hinkle), the likewise empty-headed co-anchor. Sylvia doesn’t handle this well. She has a meltdown on the air. Of course, she loses her job but the footage goes viral. Now she’s famous for all the wrong reasons.

Having to move out of Dale’s apartment with nowhere to go she ends up on the couch in her brother Walt’s (Devlin) smaller apartment. She also ends up meeting Byron (Adams), a hunky computer guy. At first she reacts to him with wariness but as she gets to know him she begins to feel much more comfortable with him than she ever was with Dale.

And that’s essentially it. If it sounds like a sitcom plot, well, it essentially is. The movie has the kind of mindless pleasantness that is inherent with the American network sitcom and many of the actors in it are sitcom vets. Like most sitcoms, the action is terribly contrived and easily predictable. The characters all come from the Sitcom Writers Handbook and while Sylvia is so whiny and unpleasant that you wish that she’d get hit by a meteor through the first half of the movie, she does improve to be nearly likable by the end and I must say that I admit that grudgingly.

O’Kelley, Adams and Devlin all make for nice eye candy depending on your own particular persuasion and Harmon, who tends to be cast in heroic roles, seems to enjoy the change of pace as the shallow douche of an ex and milks it for all its worth.

This is mildly entertaining stuff but in all fairness it isn’t anything different than you can’t already get on broadcast TV for nothing. I can’t in all fairness recommend this unless you’re obsessed with sitcoms and want to spend an hour and a half watching one.

WHY RENT THIS: O’Kelley, Adams and Devlin make an attractive trio. Harmon does well as the smarmy TV host.
WHY RENT SOMETHING ELSE: Too contrived and predictable. O’Kelley’s character spends the first half of the movie whining and unlikable. Too many cliche characters.
FAMILY VALUES: There’s enough foul language to merit the film an R rating.
TRIVIAL PURSUIT: Weaver is the voice of Peter Pan in Disney movies, television and in Disney theme parks around the world.
NOTABLE HOME VIDEO EXTRAS: None listed.
BOX OFFICE PERFORMANCE: $22,779 on an unreported production budget.
SITES TO SEE: Netflix DVD, Amazon (DVD), iTunes (rent/buy), Amazon (rent/buy)
COMPARISON SHOPPING: Begin Again
FINAL RATING: 4/10
NEXT: Tell No One