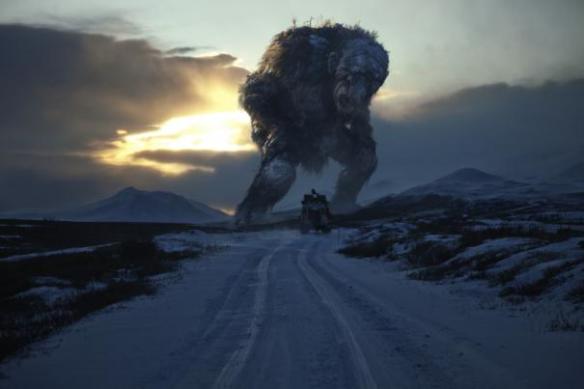 This troll doesnt hang out in chat rooms or message boards.

Let’s get one thing straight. First of all, trolls are real. They’re not nice at all, either. Some live under bridges and others in mountains. Most are confined to the wild parts of Norway.

A couple of discs with over 183 hours of raw footage were mysteriously mailed to a Norwegian media outlet. After some investigation, the footage was deemed authentic. They depicted a trio of collegiate filmmakers – narrator Thomas (Tosterud), cameraman Kalle (Larsen) and sound engineer Johanna (Morck) – trying to make a documentary on bear poaching.

They get a lead on a prospective poacher and find him in the wilds of Northwestern Norway and trail him in his battered Land Rover, towing a particularly smelly and dilapidated trailer. His name is Hans (Jespersen) and he is quite rude at first, refusing to talk or to allow them to film.

One night they trail him into the woods near a campground. They lose sight of him but hear strange, terrifying noises and see bright flashes of light in the distance. Then, he comes running back and shouts “TROOOOOOOLLLLLL!!!!!” and then all hell breaks loose.

This is just the beginning of this well-made Norwegian horror/action/adventure/fantasy film. The “found footage” concept is one that has been used successfully in films like The Blair Witch Project and Cloverfield and this one easily bests either of those two movies in many ways. While it doesn’t ratchet up the tension quite as much as Blair Witch does, it also doesn’t have the long periods of lost in the wood meandering that the earlier film has. It also has a much drier sense of humor than the one found in Cloverfield. There are a lot of these types of movies in the pipeline and hopefully the genre won’t get overused.

In fact, one of the things I really liked about the movie was its droll sense of humor. It is discovered that Hans works for a government agency called the Troll Security Service and after slaying every troll he has to fill out a form.

He is not out to kill all trolls, only those that stray out of their designated habitat and threaten populated areas. For reasons never fully explained, the government agency – particularly in the form of a rather smug bureaucrat named Finn (Hansen) – want to keep the existence of trolls secret. They cover up the damage trolls do with increasingly ludicrous explanations, including bear attacks and tornados.

A word about the trolls; they are all done in CGI for the most part and are particularly realistic and dazzling. They sniff about, being able to detect the blood of Christian men (after the terrifying demise of one of the crew they hire a Muslim to replace him). The trolls are incredible and the filmmakers create a whole mythology about them, including medical explanations as to why they turn to stone in sunlight, and a variety of sub-species that range in size from about twenty feet tall to 100 feet tall.

This is one of the more innovative and imaginative horror movies I’ve seen recently. It allows for a sense of wonder as well as a sense of humor before swatting you over the head with a Billy club and tearing a sheep into Lamb McNuggets. It’s a roller coaster ride and like most roller coasters you hope it goes on much longer than it actually does. When it finally does end, you might be tempted to get right back on again.

REASONS TO GO: The trolls are visually amazing. Beautiful cinematography and a droll sense of humor.

REASONS TO STAY: Some might find it too Blair Witch Project for comfort.

FAMILY VALUES: The trolls may be too terrifying for the very young.

TRIVIAL PURSUIT: The movie’s title and cast were kept secret until just before the premiere in order to create a viral buzz. Jespersen is a well-known comic actor in Norway.

HOME OR THEATER: The trolls are amazing and huge and the bigger screen you see them on, the better.