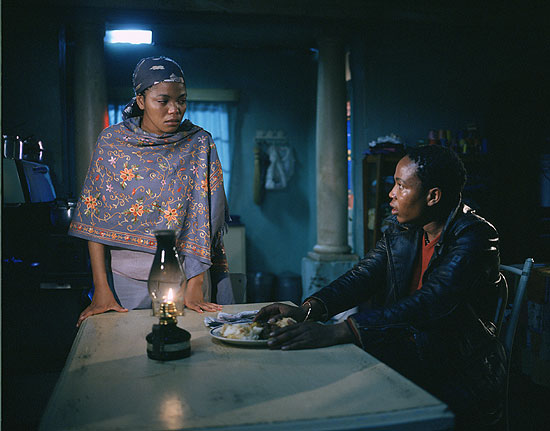 Not so much a candlelit dinner for two.

We are most often a product of our surroundings. Those who live in poverty and despair become what that poverty and despair make of them. Some have the strength to rise above, but more often than not, they become urban primitives, doing what is necessary to survive.

Few places on earth know more poverty and despair than Soweto, the ramshackle township southwest of Johannesburg. That is where Tsotsi (Chweneyagae) lives. A young man barely out of his teens, he lives on rage and whatever funds he can steal. He and his gang – fat, loyal Aap (Nkosi), bookish Boston (Magano) and cruel Butcher (Ngqobe) go out to the local train station every night to steal something, then repair to a Soweto bar to drink away their ill-gotten gains.

On this occasion, they choose a well-dressed mark to mug, then kill him ruthlessly and senselessly on a crowded train, quietly and efficiently so that none notice. Back at the bar where bartender Soekie (Nyandeni) dispenses beer, Tsotsi glares while Boston, sickened by what they have done, berates Tsotsi and tries to get him to admit to what he feels. He doesn’t even know what Tsotsi’s real name –  “tsotsi” means thug in the slang of Soweto. Tsotsi reacts with sick violence, beating Boston nearly to death.

Tsotsi leaves the bar and finds himself in an upscale suburban neighborhood. He sees a professional woman trying to get the gate to her home open as her remote isn’t working in the pouring rain. Tsotsi shoots her and takes off with her car, but is a marginal driver at best (something of a running joke throughout the movie). After having driven some distance, he discovers that he has an unwanted passenger – a small baby. Up to now, Tsotsi hasn’t hesitated to kill and one’s mind works overtime, wondering what terrible fate will befall the baby, but the street thug elects to take the baby home with him.

Thus Tsotsi’s journey begins, motivated by the helpless creature that comes into his life. After running out of condensed milk to feed his stolen baby, he encounters a young widow (Pheto) who is nursing a baby of her own. He forces her to breastfeed his baby at the point of a gun. Eventually, they strike up a relationship of sorts. She sees in him not a core of goodness, but something within him that is capable of turning away from the life of violence he has existed within all his life. She doesn’t convince him with some semblance of a great speech as a Hollywood writer might have done; instead, she allows nature to take its course.

Filmmaker Gavin Hood tells a movie that is not so much uniquely South African (although it is based on a novel by Athol Fugard) as it is a universal tale set in South Africa. Cruelty and despair are not unique to Soweto, nor is poverty but there is a unique spin exhibited here. For one thing, the soundtrack is propelled by the Kwaito music of South Africa, a kind of African rap. It fits the mood here very effectively, as is the incidental music, which is more spiritual. Either way, they help enhance the emotional qualities of the movie.

This won the Oscar for Best Foreign Movie last year, but there is nothing foreign about it. This speaks a language that we all understand, from the performances of Chweneyagae and Pheto to the simple response of a wheelchair-bound man that Tsotsi is hassling. When asked why he goes on living when his life is so bad, the man replies “Because I can still feel the sun on my hands.”

This is a powerful movie, one that isn’t about redemption so much as it is about finding the decency within us. It is unusual as it shows us a bad man who becomes better, rather than a good man becoming bad. I suppose the message is that if we can be corrupted by evil, so too can we be corrupted by good. That’s not something I had ever considered before, so this movie gets a lot of points just for that.

WHY RENT THIS: This is an outstanding movie that depicts not so much redemption but the first steps on that journey. The script is not so much innovative as imaginative but not in a fantasy way; it simply tells a story from a viewpoint that I haven’t seen before.

WHY RENT SOMETHING ELSE: Tsotsi’s actions and cruelties sometimes make it very difficult to relate to him.

FAMILY VALUES: There is a great deal of violence, some scenes of baby nursing and a bit of rough language.

TRIVIAL PURSUITS: This was the first movie to be released by Miramax after the founders Harvey and Bob Weinstein left the company.