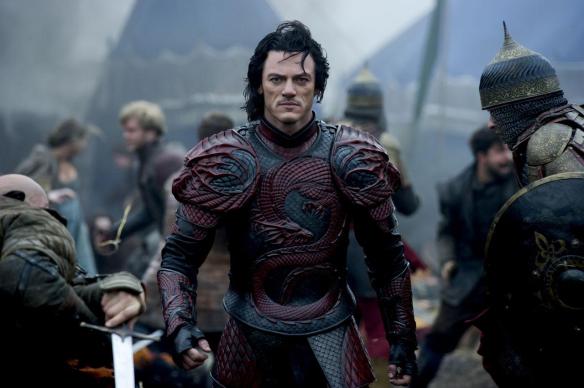 You may think you know the story of Dracula but most of us only know his Victorian-age story as told by Bram Stoker. However, even by that point the infamous vampire was centuries old, the undead creature once known as Vlad the Impaler, a 15th century Transylvanian prince who was already a bit of a monster while he was still alive. Of course, history is often a different tale than what those who were there might have narrated.

Vlad who as a boy was sent to live with the Turks as a sort of tribute (and also to keep the numerically superior Turkish army from annihilating the Transylvanians) wants nothing more than to live in peace with his people and his family – his wife Mirena (Gadon) and son Ingeras (Parkinson).

But that is not to be. A Turkish delegation arrives, demanding that the Transylvanians supply them with a thousand boys to serve in the Sultan’s army – including Vlad’s own son. Vlad tries to reason with them, but the envoy won’t hear of it. When a small party of Turks comes to take Ingeras, Vlad kills all of them.

Knowing they can never defeat the massive Turkish army who are well-armed and well-trained, Vlad turns desperate to protect his family at all costs. He ascends a forbidding mountain and there meets the Master Vampire (Dance), a creature half of myth and legend but certainly real enough. He cautions Vlad that the price for power is staggeringly high. If Vlad drinks of the vampire’s blood, he will have most of the vampire’s powers for three days. If he can keep from drinking human blood in that three day period, he will return to his human form. Should Vlad drink any human blood during those three days, a vampire he’ll remain for eternity and the Master Vampire will be freed from his prison and be allowed to walk the world again after centuries of imprisonment.

At first it seems like Vlad made a great bargain; he defeats a Turkish battalion by himself, able to change into bats, control the creatures of the night and possessed of the strength of a hundred men. However, the thirst is proving to be more difficult to resist than he might have thought possible. He also discovers that this was just a diversionary tactic by the Turks and they are coming with an army of hundreds of thousands to wipe out the Transylvanians, led by the Sultan (Cooper) himself, once a boyhood friend of Vlad’s. Can he find a way to defeat the Turks and keep his humanity at the same time?

This is one of those movies that mixes in fact and fiction together to create a different kind of brew, although the “facts” are somewhat fast and loose. In fact, just about the only thing the writers got right was that Dracula which translates depending on who you ask as the Son of the Dragon, or the Son of the Devil, was a prince of Transylvania who would impale his enemies as a means of intimidation. There the distinctions stop. There were no Turks in the 15th century; back then it was known as the Ottoman Empire and the Turks were but one ethnic group in the Empire. Also, his wife’s name was Ilona, not Mirena. He had a daughter named Mircea and a son named Mihnea but no child named Ingeras. Nor was Vlad all that popular among his nobles who were angered by his usurping of what they thought were their rights. Vlad wanted autocratic authority.

All that could have been forgiven if we’d been given a dynamic Vlad but Evans doesn’t deliver one. We get a fairly bland portrayal of the legendary nobleman, one that lacks force or charisma. We never get much of a sense as to what Vlad is like other than that he’s a devoted family man. That’s all well and good but we get a sense of his cruelty only by reputation; Vlad the Impaler might as well have been nicknamed Vlad the Doting Dad. There are a couple of scenes of stakes with Vlad watching them in anguish but that seems pretty at odds with the kind of guy who had no problems letting his enemies die horribly painful deaths. Evans seems distracted, like his mind is on a different movie than the one he’s shooting.

Mirena’s role isn’t well-defined. One gets a sense she’s supposed to be fiercely devoted to her son and husband and that she was strong enough to stand up to her sometimes hot-tempered husband but then at other times she seems uncharacteristically meek and submissive. Thus we are unable to get a real handle on who the true Mirena is.

The special effects are nifty, particularly Dracula transforming into a flock of bats, or controlling the storm near the end of the film. By and large though this isn’t as effects-driven as you might think; mostly this is a costumed action-adventure film in horror sheep’s clothing. The sets are extravagant looking and the cinematography of Ireland (subbing for the Carpathian Mountains) is lovely.

It can be said that this is lovely packaging for essentially an empty box. The suspense element is by the boards because we all know that Vlad is destined to be an immortal vampire so we know that he is going to consume the blood within those three days; it’s just a matter of how and when. So we’re left with mindlessly entertaining,,merely a trifle that will be forgotten the moment you leave the theater.

REASONS TO GO: Some nifty effects sequences. Lush cinematography and nice sets and costumes.
REASONS TO STAY: Evans is a bit wooden. Bloated and stodgy in places. Some historical inaccuracies.
FAMILY VALUES: There is war violence, scenes of bloody vampire attacks, some disturbing images and a little sensuality.
TRIVIAL PURSUIT: Sam Worthington was originally set to star until he had to drop out and was replaced by Evans.
CRITICAL MASS: As of 10/25/14: Rotten Tomatoes: 24% positive reviews. Metacritic: 40/100.
COMPARISON SHOPPING: Van Helsing
FINAL RATING: 5.5/10
NEXT: Six Days of Darkness begins!