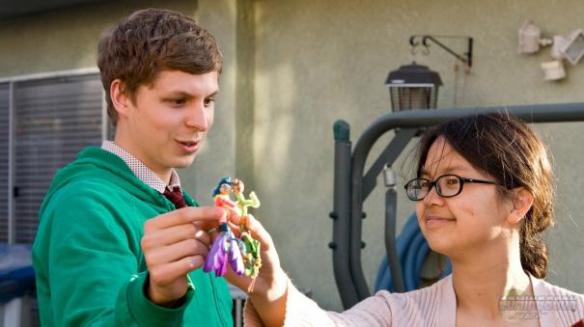 Love means never having to say you're too freaking twee.

Love is elusive and difficult to pin down; it’s often difficult to tell if we are truly in it or just feeling surface infatuation and many times we don’t realize we’ve had it until we’ve lost it. It’s a confusing emotion that turns us upside down and inside out, and there are those who simply don’t want to deal with it at all.

Actress/Comedian/Performance Artist/Musician Charlyne Yi isn’t one of those. She is very skeptical about love; she’s never felt it and is fairly certain she never will. Still, she’s curious about it and wonders what all the fuss is about. She takes a camera crew out and interviews a variety of people both known and unknown on the subject.

That’s the movie in a nutshell but there are some things you need to know about the movie otherwise you’ll be hopelessly lost. First, while the interviews themselves are real, the film crew you see on-camera is not. While the director of Paper Heart is in fact Nicholas Jasenovec, the man you see onscreen is not – he’s actor Jake M. Johnson playing Nicholas Jasenovec.

Also, the romance between Yi and actor Michael Cera is also for the most part staged. The two were actually already a couple by the time filming commenced, although the relationship ended while the two were doing a publicity tour (seems kind of cold time to dump your girlfriend but there you have it).

The movie is punctuated by paper and pipe cleaner “animations” put together by Yi and her dad after the shooting had been completed. This is supposed to look artistic and trendy and cute and is in all honesty rather pointless; while something like pathos or warm fuzzies are supposed to be enticed from the audience all I felt was irritated.

The best part about the movie is the actual interviews. While they run the gamut from sincere to silly, they are at least authentic and some of them are quite insightful. There was no pretense in any of the responses and that was quite refreshing after the staged portions which got so twee and so self-consciously cute that I thought the studio should have handed out free insulin to everyone who bought a ticket to see this.

Now, I’m usually not one to pass judgment on the life choices of others, but I have to tell you that I found all the people in the “non-fiction” portions to be a little too condescendingly hip; I felt like I was being laughed at more than anything. Still, the interviews more than make up for the flaws of the rest of the film; if they had stuck to that documentary instead, they might have had a really good movie instead of just a mediocre one.

WHY RENT THIS: The “serious” documentary interviews with ordinary people are actually pretty good.

WHY RENT SOMETHING ELSE: OHMYGAWD by the end of the movie you want to kill these pretentious, overbearing, obnoxiously cute people.

FAMILY VALUES: There are a few bad words but otherwise this is fine for every audience.

TRIVIAL PURSUIT: Bobcat Goldthwait and Bill Hader were also interviewed for the movie, but their sequences were left on the cutting room floor.