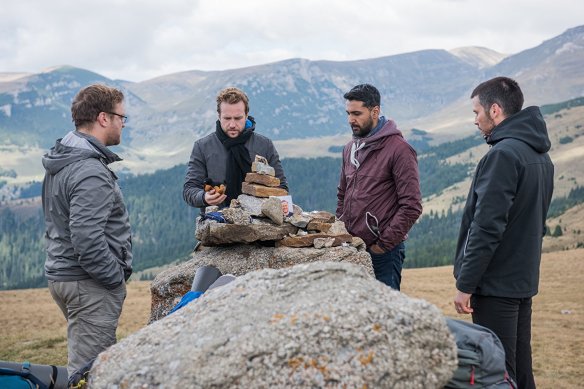 These are the manly rituals of remembrance.

There is nothing quite like a hike in the woods to get you connected with the planet and with your friends. There are those who relish it more than others; some prefer more urbanized pursuits. But the one thing that most people agree on – particularly when it comes to horror movies – is that short cuts rarely end well.

Five college buddies are at the pub trying to figure out where they’re going to go on their bro vacation. They are of an age where they’re getting too old for Ibiza and too young (barely) for brunch but Vegas remains an attractive option. Unfortunately, tragedy strikes the group of five and now they are a group of four. In honor of their fallen comrade, the surviving four – whiny Dom (Troughton), guilt-ridden Luke (Spall), Alpha male Hutch (James-Collier) and the “takes the piss” guy Phil (Ali) – head out on a hiking trail in Northern Sweden headed for a lodge which is supposed to be really, really cool.

Along the way, one of them twists his ankle and rather than continue on the trail or head back, the five do the horror film-stupid act of taking a short cut through the woods because we know that a walk through dark and scary woods is a far easier task than following a clear, well-marked and well-maintained trail, right? All in all, with decision making skills like that, they’d have been better off going to Las Vegas. All they’d have lost was money.

They end up lost and stranded in the woods in the balmy Swedish weather (read as “lots of rain and fog”). Soon creepy things start to happen; they find eviscerated animals hanging from trees and strange symbols carved into the wood. They hole up in an abandoned house (which Phil wryly proclaims “This is clearly the house we will all be murdered in”) with a strange straw figure on a kind of altar. No wonder each of them have terrible nightmares that night and at least one of them ends up naked in a supplicating position at the altar.

Unnerved the quartet tries to find their way back to Swedish civilization but what they don’t know is that they are running headlong into the clutches of a rural cult – and the dark thing that the cult fears and worships. Daylight can’t come fast enough.

This British film was snapped up by Netflix and well they should. This is arguably one of the best horror films since The Babadook in my opinion. It has a lost in the woods Blair Witch Project vibe (albeit without the found footage) combined with a Wicker Man cult creepiness. In fact, Bruckner does a great job with the creepy tone which continues to grow more and more unnerving as the film progresses.

The movie does start rather slowly with one scene of shocking brutal violence breaking up the monotony but it turns out to be very okay; this is a slow builder and a fast burner of a movie. By the time the second half of the film rolls around you realize you’re on a roller coaster both emotional and metaphorical as the scares and chills come at you without any let-up.

The monster in the film isn’t revealed until near the very end (mostly you see it as trees swaying and unearthly howls) and it’s certainly worth the wait. It’s not in the film very long in terms of screen time but it casts a giant shadow the whole way and it also has the power to send the characters hallucinations involving their worst fears and greatest guilt. It is particularly effective on Luke who blames himself for what happened to one of their number, not because he’s directly responsible but because he failed to help when his hour of need arose.

The movie is all about guilt and redemption and that may be a bit too cerebral for horror film fans who only care about the visceral (and there’s nothing wrong with either of those types of horror by the way). There is some scenes of gore but we don’t see bodies actually being ripped wide open by the monster which might be the movie’s only real failing.

The Ritual played the Toronto Film Festival in 2017 and has gotten some really good critical notices particularly in its native UK. Here in the States, it is available now on Netflix and worth getting the service for all by itself. This is one of the best Netflix original movies to date for the service and an early entry for the best horror film of the year.

REASONS TO GO: The monster, when finally revealed, is really nifty. The last half of the film is a roller coaster ride. The creepy factor gets higher and higher as the film goes along.
REASONS TO STAY: The film starts off rather slowly.
FAMILY VALUES: There is a fair amount of profanity, violence (some of it graphic and brutal), some grisly images as well as scenes of terror.
TRIVIAL PURSUIT: One of the producers of the film is Andy Serkis although he doesn’t appear in the film as either an actor or a motion capture specialist.
BEYOND THE THEATERS: Netflix
CRITICAL MASS: As of 2/11/18: Rotten Tomatoes: 68% positive reviews. Metacritic: 58/100
COMPARISON SHOPPING: Rituals
FINAL RATING: 8/10
NEXT: Devil’s Gate