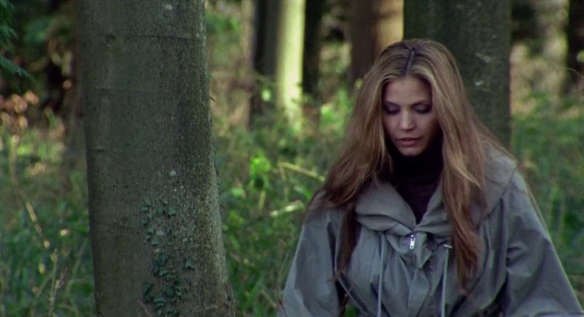 Let’s face it: the sooner we admit we don’t understand everything and that the world can’t always be easily explained, the better off we’ll be. There are things we don’t get, and perhaps we never will. The human mind, for example, might just be foremost among them.

Susan Golden (Carpenter) is an author who had a nervous breakdown not long ago but has left the care of her doctor and has been pronounced fit to rejoin society. She’s eager to resume her writing career but has hit a massive case of writer’s block. So what does she do? She and her husband David (Sculfor) find a spooky Victorian mansion in Middleofnowhereshire, England.

Soon she’s hearing noises and seeing a phantom soccer-playing kid on the lawn. The locals think she’s batty and to make things worse, David has become bored with her and is gallivanting around with pretty much any woman in town who’s willing – and there are apparently plenty that are.

She’s also seeing visions of horrific murders happening to people around her that come horrifyingly true. So what’s going on? Is there something sinister going on, maybe even supernatural? After all, there’s an entire prologue in which a group of tree-hugging hippies thousands of miles away get slaughtered by a serial killer in a seemingly random and unrelated incident. Or, has Susan lost it again, only this time with a homicidal edge to her madness? And of course there’s always option number three – Susan is being manipulated by someone with wicked intentions.

I remember Carpenter from the Buffy, the Vampire Slayer and Angel TV shows and she had so much promise. Beautiful and an accomplished actress, the world appeared to be her oyster. Sadly, things haven’t turned out the way I expected. She mostly appears in essentially cameo roles that trade in on her Buffy name value, and occasionally turns up in things like this.

She appears to be just going through the motions here. I’m not sure whether she thinks that “former mental patient” means “emotionally shut off” but I have to tell you – she just doesn’t give the audience much to get behind as plucky heroines go. However, she doesn’t have a terrible amount of support from the rest of the cast either. You wonder if someone sprinkled Valium on all the food from craft services.

That isn’t to say that there aren’t some moments with decent scares. The slasher film prologue is actually quite good – I kind of wished they’d followed that road but instead they chose to go the moody psychological horror route and while there is nothing wrong with the latter genre, they just don’t do it as well in this instance.

WHY RENT THIS: Some fairly decent scares.

WHY RENT SOMETHING ELSE: Prologue looks like it came from an entirely different movie. Wooden acting and stale plot lines.

FAMILY VALUES: Lots of sexuality and nudity, some gore and violence and a lot of foul language.

TRIVIAL PURSUIT: This is a remake of the horror short Dreamhouse which was released as a feature along with two other shorts and a linking story as Screamtime in 1986.