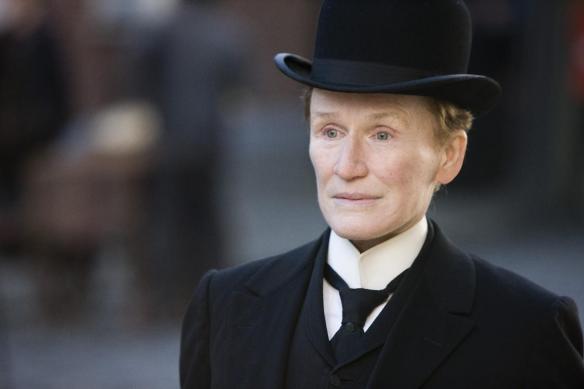 Glenn Close shows off her dapper side.

It is never easy being a woman (or so I surmise) but it was much harder in the 19th century than it is now. Opportunities for women back then were essentially limited to the husbands they could catch; if you happened to live in Ireland those opportunities were fewer still.

Albert Nobbs (Close) works as a waiter at a Dublin hotel just before the turn of the 20th century. Quietly efficient, he is appreciated for his efficiency, his unobtrusive service and of course his discretion. Even the hotel’s hypocritical owner, Mrs. Baker (Collins) feels kindly disposed towards him.

Albert hides a secret; beneath the starched high collar no Adam’s apple can be found; beneath the starched white shirt are a pair of womanly breasts rightly bound; beneath his perfectly pressed trousers no male member resides. He is a woman masquerading as a man, and successfully. Albert lives in quiet solitude in his small mean room in the employee quarters of the hotel. Beneath a board he hoards all the tips he’s received over a 15 year career. He is very close to his goal of 600 pounds; enough to buy a tobacconist’s shop where he’ll find the true independence he’s been longing for and when he makes enough money, selling the business and retiring to a seaside community.

His life is well-ordered and impeccably run; he knows what each guest needs before his guest knows it is needed. Albert rarely smiles because that would be out of place. That’s not to say that he has no friends although acquaintances would be the better word; the boisterous Dr. Holloran (Gleeson) and the tart-y chambermaid Helen (Wasikowska) socialize with him but don’t really know him. Nobody really does and Albert prefers it that way. Easier to keep his secret.

The hotel is a bit of faded glory and needs some sprucing up. The penurious Mrs. Baker realizes that in order to keep her customers she’ll need to do some maintenance and she hires Mr. Hubert Page (McTeer) to paint the hotel. It will be a fairly long job and so Mr. Page is made to bunk with Mr. Nobbs which doesn’t make Albert very happy. To his shock however, he discovers that he and Mr. Page have something in common – their gender.

Hubert has even gone so far as to marry Catherine (Gallagher), a truly winsome woman who not only knows Hubert’s secret but approves. Catherine is a dressmaker who keeps the two of them afloat when Hubert’s work dries up (in a manner of speaking). They make a fine team.

After Hubert’s job is completed, a new handyman is hired, Joe Mackin (Johnson). There’s not much good to say about Joe; he’s a drunk who can get violent when in his cups, he’s abusive particularly towards women and while devilishly handsome he isn’t particularly a go-getter. Of course Helen falls for him immediately.

Shortly after that a typhoid epidemic sweeps through Dublin, drying up business for the hotel and necessitating some changes. Hubert’s situation has convinced Albert that a good woman will be needed to help run his shop and he decides Helen would be perfect for that position. Not knowing that she is with someone, Albert tries courting her in a stiff and fumbling way. Joe finds out about it and encourages Helen to lead him on so that he might supply her with expensive gifts that he can sell and book passage for them both to America. The naive Albert doesn’t realize what’s going on. In such conditions, can he find his dream and even if he does, is that a sure way to happiness?

The undercurrents here are of sexual politics. The story began life as a novella by Irish author George Moore called The Singular Life of Albert Nobbs which may be found in his collection Celibate Lives if you’re interested in reading it. I get the sense that Nobbs makes a better man than most men which could well be a droll commentary on the state of manhood by Moore although I couldn’t swear to that explanation. I find it kind of comforting to think so however.

Close, who has championed this film for more than a decade, is one of the few actresses who can pull off the role without making a burlesque of it. She has the lower register vocally to make the illusion seem real and so complete is it that during a scene when she and McTeer dress up as women for a stroll along the beach, you almost could believe that they are a couple of men in drag, so awkward are they in the clothing of their own gender.

McTeer, who like Close was nominated for an Oscar in 2012 (making it the first time in Oscar history that two women pretending to be men were nominated for the same film), also makes the illusion seem real and while less time is spent on Hubert than on Albert, McTeer makes the role memorable and the relationships between Hubert and Catherine as well as Hubert and Albert believable.

There has been grumbling from some quarters that the film is a snide rip on the sexual politics of lesbians but I can only conclude that those making such claims haven’t seen the film. Neither Hubert nor Albert (whose real name we never discover) are sexually attracted to women and despite Albert’s pursuit Helen for matrimony, it’s more of a business arrangement for him. In fact, the whole masquerading as men thing is much more of an economic necessity for both of them rather than a conscious lifestyle choice. They’re just doing what they need to in order to survive.

While the pacing is a bit slow and the stiff dialogue and demeanor of the period may be excruciating for the impatient Generation Right Freaking Now, it’s still a movie well worth seeking out.

WHY RENT THIS: Oscar-worthy performance by Close. Wasikowska is lustrous.

WHY RENT SOMETHING ELSE: A little bit stilted and slow.

FAMILY VALUES: Some sexuality, brief nudity and some bad language.

TRIVIAL PURSUIT: Close originated the role in a stage play based on the Moore novella. She won an Obie for her stage portrayal and lobbied for more than a decade to make a film out of it, which she eventually co-produced, co-wrote and received an Oscar nomination for her starring role.

NOTABLE HOME VIDEO EXTRAS: While commentary tracks are generally de rigueur on most major home video releases, the one here by Close and Garcia is extraordinary, with Close going into enough detail into the source material and how it differs from the film, casting and character backgrounds and into great detail in the making of the film. It’s one of the best I’ve heard yet.

COMPARISON SHOPPING: I Served the King of England