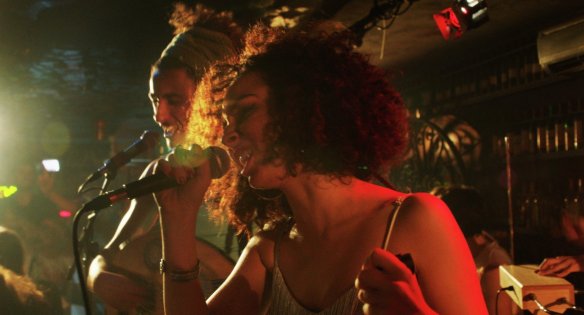 In the fire of youth we sometimes find the seeds of change. In 2010, Tunisia was ruled by the despotic President Zine El Abidine Ben Ali who controlled the citizenry through fear; secret police regularly seized citizens and police informants meant you never knew who to trust. Any sort of criticism of the regime was unthinkable.

Farah (Medhaffar) is an 18-year-old girl with a bright future. She had been accepted into medical school, which made her mother Hayet (Benali) extraordinarily proud as well as her father (Jamoussi) who works in the mines in Gafsa where those seeds of revolution are beginning to bloom.

But Farah has a voice and she’s a member of a band along with her boyfriend Borhéne (Ayari), a sensitive hipster sort who writes most of the lyrics and plays the lute – a Tunisian guitar. He encourages her to do her own thing, which in a repressive conservative culture like that of Tunisia is unheard of for women.

As Farah grows more independent, she and her mother become more at odds. Hayet is concerned that her daughter is throwing away her future for transitory pleasures, plus she hears from an ex-lover who now is a sleazy government functionary that her daughter is drinking in men-only bars and has been seen making out with her boyfriend. Hayet reacts as most mothers would, forbidding her daughter from continuing her music career. Like most daughters, Farah ignores her mother.

Borhéne has written some pretty subversive lyrics for Farah to sing and she sings them passionately; the music attracts the attention of the police who begin following the members of the band and engaging in subtle intimidation. The pressures begin to take their toll on Farah whose relationship with Borhéne begins to fray. As Tunisia inches closer to revolution, Farah treads on dangerous grounds but like a dancer on thin ice continues to pirouette even as the ice cracks beneath her.

Taking place a few months before the Jasmine Revolution would oust Ben Ali from power Bouzid has crafted an energetic, life-filled movie that carries with it the passions of the young and perhaps the naiveté of the young as well. Farah is willful, sometimes to a fault and her idealism clashes with the conservatism of her mother. As the film goes on, we begin to realize that Farah and Hayet are much more alike than not and it is their relationship that is surprisingly at the center of the film, not that of Borhéne and Farah.

There is some misogyny present here and Bouzid approaches it directly and without rancor; it is part of the culture that women don’t have the same rights and the same dreams as men. There is one point where at a party that Farah is dancing joyously with the male members of the band that Borhéne takes exception to; “You’re embarrassing me,” he growls before stalking off to flirt with another woman, perhaps to infuriate his girlfriend – which it does. These are the games of the young, are they not?

And yet Bouzid is not unsympathetic; the men here are mainly victims of their own upbringing but still, she doesn’t sugarcoat the hypocrisy of the attitudes towards women. She remembers well the fear-ridden society that was Tunisia in those days and recreates the furtive looks, the fearful glances, the body language of a population rigid with worry. It is something most of us can’t really understand because there is no understanding it if you haven’t lived it for yourself; consequently some of the actions of the characters here may seem confusing or difficult to understand to American viewers.

The music is important and I have to admit I dug it. It combines Arab Mezwed with rock, propelling the seductive sounds with a rock beat and a kind of club attitude. There are also the lyrics which while flowery in the style of Arab poetry but describe the frustration of those living under the boot of a tyrant. The one complaint I have is that there are too many musical interludes; the film might have benefitted from cutting one or two of them (the songs are largely played through to completion which might be a bit of a shock to impatient American audiences who are generally given just snippets of performances in movies).

However, it must also be said that Medhaffar lights up in the stage sequences. Her smile is energetic and contagious. Her curly hair flies up from her head like a grenade going off and her body writhes sensually onstage. She is pretty enough an actress; in these sequences she’s beautiful. Benali is better known in Tunisia as a singer but she delivers an emotionally charged performance that in many ways is more resonant than that of Medhaffar. There’s a sequence when Benali is distraught and looking for her daughter in a bus station; it captures the love and the despair of parenthood that is universal to anyone who has a kid.

The movie takes place in places that aren’t found in the guidebooks of Tunis. It is seedy at times but in an unapologetic way, much like American movies that take place in bars and taverns. It is not a part of our culture that we’re proud of but it is part of our culture nonetheless. Bouzid is most certainly an appealing voice and while her debut feature film isn’t perfect, it is striking and leads me to look forward to her upcoming films. This is a director to keep an eye on.

REASONS TO GO: The film is full of life and energy. Medhaffar really sparkles on stage. It is gratifying to see a movie set in the day to day of Tunisia.
REASONS TO STAY: The pacing is on the slow side. Some of the subtleties of Tunisian culture are lost on American audiences which may lead to some confusion. Too many musical numbers.
FAMILY VALUES: There is some sexuality and brief partial nudity, a bit of profanity, some drug use and a ton of smoking and some adult themes.
TRIVIAL PURSUIT: The story was inspired by actual events in the life of Bouzid, who founded a cinema club during the Ben Ali era and discovered that one of her closest friends in it was a police informer.
CRITICAL MASS: As of 9/9/16: Rotten Tomatoes: 100% positive reviews. Metacritic: 76/100.
COMPARISON SHOPPING: Juno
FINAL RATING: 6/10
NEXT: Imperium

If only Kellan Lutz was this electric onscreen…

I don’t know what it is about movies about the Greek demigod Hercules that they are almost uniformly awful, going back to the Steve Reeves epics of the 60s (which were actually the best of them and could only be classified as mediocre) to the godawful Schwarzenegger version Hercules in New York to even the Disney animated feature which remains one of their weakest ever. However, just when you thought they couldn’t get any lower…

When Queen Alcimene (McKee) of Greece realizes her tyrant of a husband, King Amphitryon (Adkins) wages war not for gain but out of sheer bloodlust, she knows he must be stopped. She prays to the goddess Hera for deliverance and the goddess appears, promising a son who would be the downfall of the father. She allows her husband, the God Zeus to lie with her and father her bouncing new baby boy whom will be named Heracles…er, Hercules which translates to Gift of Hera although the boy will be called Alcides as her hubby ain’t too keen on being reminded of the boy’s divine parentage. Instead, he showers favors on his mean-spirited elder son Iphicles (Garrigan).

Hercules (Lutz) grows to manhood and falls for the Cretan princess Hebe (Weiss) whose last name I’m certain is Jebe. She’s a comely girl but she is promised to Iphicles who is heir to the throne. She of course would rather have the buff Hercules and conspires to run off with him. Unfortunately they are caught and Hercules is banished to Egypt to take on a rebellious city-state on an expedition led by Sotiris (McIntyre) who knows they are in for a rough ride when the number of soldiers assigned to him is cut in half. The whole thing is a set-up of course and Sotiris and Hercules are the sole survivors and are sold into slavery to be gladiators in a mud pit – think of it as a combination of MMA and female mud wrestling. Can Hercules win his freedom and get back home in time to prevent his true love’s marriage to his brother?

There are just so many problems with this movie I don’t know where to begin. The script might be a good spot – the dialogue is so cringeworthy that you spend the entire 99 minutes (which seemed like 199) in a permanent twitch rendering the audience in a kind of perpetual seizure throughout the film.

I haven’t seen so many slo-mo action shots in which regular speed stunt sequences are slowed down and then returned to normal speed. It happens so often that it becomes tedious and actually caused me to twitch further. In fact something tells me that it may well have been more entertaining to watch surveillance camera footage of the audience than to watch the actual film. Where is Mystery Science Theater 3000 when you need them?

Kellan Lutz. Ah, Kellan Lutz. He is a good looking lad with an easy-going demeanor and an engaging grin but at least at this point he doesn’t have the charisma needed to carry a movie like this. In fact, the best performances here were Adkins as the frothing-at-the-mouth King and distinguished character actor Serbedzija as Herc’s tutor. The rest of the cast…aieee!

Even the CGI isn’t up-to-snuff – an early sequence in which Hercules battles the Nemean Lion is so bad that the audience is yanked right out of the movie, which might not be a bad thing. This isn’t a movie you should get lost in.

It gives me no joy to write a review like this. Director Renny Harlin has some pretty good flicks to his credit although admittedly it’s been awhile since I can remember one of his movies fondly. Lutz seems to be a nice enough guy but this is a really, really bad film and I’d be doing my readers a disservice by sugarcoating it. There are really very few redeeming factors other than the very buff Lutz is shirtless for virtually the entire movie which may be appealing to those who find that sort of thing appealing. Otherwise, just keep in mind that this may well be the leading contender for worst movie of the year.

REASONS TO GO: Bored out of your skull.

FAMILY VALUES:  There is a great deal of combat action and violence and a couple of scenes of sensuality.

TRIVIAL PURSUIT: To maintain his physique, Lutz did more than a thousand push-ups and abdominal crunches every day on set.