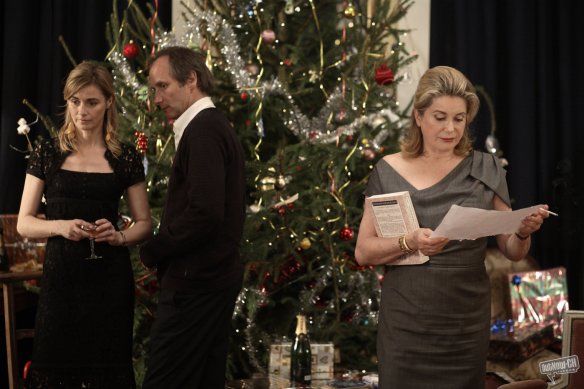 Even now, most red-blooded men wouldn't mind having Catherine Deneuve under their tree.

Christmas is a time for families to gather, no matter the distance. Sometimes the distance isn’t just physical and geographical, it’s emotional as well.

Junon (Deneuve) and Abel (Roussillon) Vuillard are the parents of three adult children: Elizabeth (Consigny), a neurotic playwright, Henri (Amalric) the charming but destructive black sheep and Ivan (Poupaud), the peacemaker between the children. After a disastrous business venture five years prior, Henri who had misappropriated funds from the theater he co-owned was bailed out by Elizabeth on the condition that she never have anything to do with him again and that he be banished from any family event that she was also attending.

Junon and Abel also had a fourth child, Joseph, who would have been the eldest but had died in childhood of leukemia. Now, Junon has developed it and the children and grandchildren (including Paul (Berling), son of Elizabeth who has mental problems) are being tested for compatibility to donate bone marrow for a transfusion.

Because it is Christmas, the decision is for the children to come to the Paris home they grew up in and so they do, families in tow; Henri’s flamboyant girlfriend Faunia (Devos), Ivan’s beautiful wife Sylvia (Mastroianni), Elizabeth’s mathematician husband Claude (Girardot) and cousin Simon (Capelluto), a lovesick tortured artist (sounds like the name of a band to me).

Spending time in closed quarters begins to force the family to deal with the tensions and feelings that have been dormant due to distance. The family dynamics begin to distend, change and convulse under the weight of Junon’s illness, the always-present specter of Joseph hovering sorrowfully above the family table and the family politics that create enemies out of brother and sister.

I’m deliberately trying to reveal as little of the plot as I can. One of the things that works about the film is the little subplots and interrelationships that are only seen as threads of the tapestry, but in the final couple of scenes it’s as if the camera pulls back and the tapestry is finally seen as a whole.

None of these characters are perfect and few of them are even likable. Junon is not the best of mothers, playing favorites with her children but loving none of them as much as she loves herself. Deneuve is still radiantly beautiful at age 66 and as elegant as she has ever been. Her Junon seems an improbable match with the more gnome-like Abel, but there is a certain amount of affection between them.

Amalric is one of my favorite French actors today, and anyone who saw him in The Diving Bell and the Butterfly is likely to agree (he also played the villain in Quantum of Solace and was one of the best things about it). His Henri is fully aware of his familial role as an absolute jerk and has embraced it, but not without cost. Few actors in France can hold their own with Deneuve but Amalric is one of them and he does here.

One of the more interesting asides of the movie is the casting of Mastroianni as Sylvia. If the name sounds familiar, it should be; she’s the daughter of Italian actor Marcello Mastroianni and…Catherine Deneuve. The facial resemblance to her mother is marked; I think the casting is meant to imply that Ivan married a girl who not only was much like his mother emotionally but also facially as well which is a little bit creepy but there is a certain delicious irony to it.

At times the squabbling and some of the family skeletons seem a little bit too forced and that takes away from the film’s realism. What I like about the movie is that the characters are very human and far from perfect; this is a family that has issues, a whole lot of them as a matter of fact. As I said earlier, some of the main characters aren’t even that likable but every last one of them is compelling. Other critics have said that they have uncovered further subtleties upon repeated viewing of the movie; I haven’t had a chance to do that yet but I suspect I’ll have the same reaction.

If you’re expecting a Hollywood feel-good family Christmas movie, you’re going to open up a big box of disappointment. If you want to feel good without being manipulated, this is going to be more your speed. I wound up with a warm, Christmas feeling that was so genuine that I didn’t let go of it for days. Christmas isn’t about the perfect family; it’s about the family we actually do have, warts and all. The Vuillards aren’t always lovable but there is love and it is real. That’s the Christmas we may not generally wish for but it’s the one we usually get and to be honest, the one we usually remember with the most fondness.

WHY RENT THIS: The themes of redemption and forgiveness are particularly heartwarming given the seasonal tale. Deneuve is captivating and still absolutely gorgeous.

WHY RENT SOMETHING ELSE: The squabbling and family dynamics sometimes seem a little bit more over the top than real.

TRIVIAL PURSUIT: Desplechin has been nominated for eight Cesar Awards (the French equivalent of the Oscar) and four Golden Palms (a prestigious award handed out at the Cannes Film Festival) but has yet to win either.

NOTABLE DVD EXTRAS: The DVD and Blu-Ray are available as a part of the prestigious Criterion Collection. They contain a copy of Desplechin’s one hour documentary L’Aimee which is about the selling of his childhood home and directly prefaces the tone of A Christmas Tale. There is also a booklet containing an essay from critic Phillip Lopate about the film and its impact.

TOMORROW: The Holly and The Quill continues.