It has become something of a habit now for Hollywood to take the final book in a young adult franchise based on a book and split it in two; this has been done for the Harry Potter series, Twilight and now The Hunger Games with the same fate planned for the Divergent series. This is a blatant cash grab that cynical studios use to squeeze every last penny that they can out of a successful franchise. As for the Potter series, the first part was the weakest movie of the eight-film franchise (although the second part turned out to be one of the strongest). In the Twilight series Lionsgate both movies were poor and the final entry the worst of the entire series.

In this penultimate film, the events of Catching Fire have led to the complete carpet bombing and destruction of District 12, home of Katniss Everdeen (Lawrence) who has been taken to the previously-thought abandoned District 13. However her love Peeta Mellark (Hutcherson) had been left behind and was captured by the men of President Snow (Sutherland) and brought back to the Capital. There he is used as a pawn, with interviews conducted by the smarmy Caesar Flickerman (Tucci) which essentially are propaganda pieces.

District 13 president Alma Coin (Moore) is wary of using Katniss for the same purpose; clearly Katniss is shell-shocked and not in an emotional state where she is able to be a spokesman for the revolution that is sweeping Panem. However uber-patient ex-boyfriend Gale Hawthorne (Hemsworth) is on hand to help Katniss make it through; old friends Haymitch (Harrelson), Effie Trinket (Banks) and Finnick (Claflin) are there to support Katniss. Rescued from the rubble of District 12 are Kat’s sister Primrose (Shields) and mom (Malcomson).

Pulling the strings in District 13 is Plutarch (Hoffman) a cynical but brilliant marketing man who is selling the revolution to the people of Panem whereas President Snow is selling safety and security while providing neither. A villain of the first order, he callously orders the bombing of a hospital in order to set an example of what happens to people when they allow a visit from the Girl on Fire who is now referred to as the Mockingjay. This pisses Katniss off enough to pull out of her funk temporarily – until the callow Peeta makes another plea for peace. Who knew the face of revolution would be so emotional?

And so after that atrocity the rebels are finally moved to push into an offensive against the Capital, giving them the opportunity to rescue Peeta and the other Victors held captive by the President, including Finnick’s girlfriend Anna (Dawson). However, they don’t begin to see the depth of the game being played by President Snow – and how far he is willing to go to win it.

As any fan of the series will tell you, it’s all about Katniss and thus it’s all about Jennifer Lawrence. Normally I’d say that’s a pretty safe bet; after all, she has become one of the hottest actresses in the world, with Oscar wins as well as starring in one of the biggest franchises in Hollywood today. However, I can’t say as I like what is happening to her character here.

Now I’ll admit that it should be taken into account that I’m not a teenage girl nor have I ever been one – nor am I likely to ever be one. I may be getting this all wrong but I feel cheated a little bit by what Katniss has become in this movie. I had always viewed her as a good role model for young girls; strong, independent, able to defend herself and those around her and with a strong moral compass. I’m not sure what the author’s intentions were  but I saw the same thing happen to Bella Swan in Twilight as well. Both series were written by women but I’m not sure if they were saying it’s okay to be ruled by your emotions to the point where you become virtually immobilized by them, or if they’re saying that’s part of being female.

I don’t know about that part. How is it role model material for your strong, independent heroine to be literally whining “It’s not fair!” while pining away for her boyfriend to the point that she’s willing to let all sorts of people – including her sister and mom – be killed because she’s too emotional to act to prevent it. That kind of self-centeredness may be part of modern culture but it seems out of place for a movie heroine. Of course, my perceptions of what a role model should be may be hopelessly outdated but I do like to think that there are some things that are fairly basic and timeless.

Lawrence is a terrific actress but she seems curiously lifeless here. Even so, she still manages to dominate the screen and while this isn’t her best work, it certainly is enough to carry the movie. She gets some able support, particularly from the late Hoffman whom the film is dedicated to. Mostly though this is a lot of people going through the motions for a paycheck and Moore, also a fine actress, looks distinctly uncomfortable in an unfortunate wig.

There’s just not a lot of energy and life to this movie even though the visuals are well shot and there are some pleasant moments in idyllic forests. Most of the movie takes place in District 13’s underground bunker and is perpetually underlit. Even without 3D this movie is dark and dingy-looking most of the time. You have to admit though it does set a certain kind of bleak mood.

There is subtext here about image-making and its use in manipulating opinion, and while that is a fascinating subject, the filmmakers tend to thunk us over the head with a shillelagh rather than skewer us with a rapier which would be much more preferable. There isn’t a lot of subtlety here but then again, I get the sense that the filmmakers don’t respect their target audience a whole lot. Certainly the kind of girls that identify with Katniss are capable of understanding subtlety.

This is a big disappointment for me. Thus far I’ve actually enjoyed the series and was looking forward to seeing this one. Although it is reasonably entertaining to earn a feeble recommendation, I was hoping for so much more. With any luck,  the finale next Thanksgiving will pull out all the stops and let the series end on a high note rather than a whimper or a whine which is where it seems to be going. Prove me wrong. Please.

REASONS TO GO: Some pleasing eye-candy. Lawrence is terrific even when she’s subpar.
REASONS TO STAY: Turgid and boring. Lacks any kind of spark. Katniss, a strong and courageous soul, is reduced to a weepy teen pining for her boyfriend and feeling sorry for herself.
FAMILY VALUES: There is some intense violence and disturbing images.
TRIVIAL PURSUIT: Hoffman passed away a week before filming concluded; rather than recasting the part, the filmmakers did some rewrites so that the portions Hoffman didn’t film could be incorporated in different ways.
CRITICAL MASS: As of 12/2/14: Rotten Tomatoes: 66% positive reviews. Metacritic: 64/100.
COMPARISON SHOPPING: Divergent
FINAL RATING: 5/10
NEXT: Daybreakers 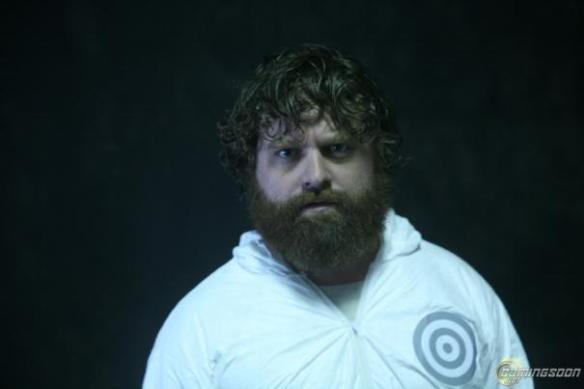 Zach Galifianakis supplements his income with a part-time job at Target.

It is the day of new President Obama’s inauguration. In Los Angeles, an underground bunker is the headquarters for a group called the Factory, two teams of highly skilled killers (Team Alpha and Team Omega) are welcoming a new recruit to their ranks. He is codename Fool (Anderson) and no, that’s not a knock against his intelligence; all of the operatives have codenames based on the tarot deck.

However, there is much more going on than meets the eye. There is a traitor in their ranks and when Devil (Tambor) turns up deceased, the facility is accidentally put on lockdown with 90 minutes to evacuate before going ka-boom. With the identity of Devil’s murderer in question, suspicions run rampant and it becomes crystal clear that the orders have come down from on high that the two teams have been ordered to eliminate each other. Who, if anyone, will be left standing at the end is pretty much anybody’s guess.

The concept is pretty nifty and the cast even more so, so that should make for a terrific movie right? As we all know, that isn’t always the case. The movie is sabotaged by sub-par production values and awkward moments that bring proceedings to a screeching halt every so often, and that’s not what you want to do in a thriller, an action movie, a spy movie or a comedy, all of which this movie has elements of. Maybe that’s part of the problem – too many genres in this soup.

Anderson is a bland lead, although Yustman as the romantic interest (who has a history with Fool) is pretty solid. Galifianakis, who was on the cusp of hitting it big when this was filmed, has little more than an extended cameo as a brilliant but deranged individual haunting the corridors of the bunker. Barkin is wonderful as usual as a cruel chain-smoking bitch who heads one of the teams; I’ve always thought of her as the thinking person’s Cameron Diaz. Corddry also gets kudos for an acerbic foul-mouthed mentor for Fool.

I like that the bunker is more or less a bunch of offices, and the assassins dispatch each other with a variety of office supplies. Some of these murders are rather clever and more than a few are pretty gruesome. The somewhat banal environment accentuates the horror of the bloodshed nicely. These sequences tend to work better than most of the others in the movie. While the cast is impressive, for the most part the characters are kind of one-note and exist to have a cool Tarot-related name and eventually get bumped off.

All of this could have been forgiven if the movie had a little bit more fun in it but the fun felt forced. I would have wished for something with a little more energy; at times, it felt like a direct-to-cable release that in a lot of ways it was. Operation: Endgame got a very brief theatrical release before going to home video which is where you’re going to find it now, assuming you still want to look for it. There are some moments that are genuinely entertaining, but not enough to keep my interest throughout.

WHY RENT THIS: Fun concept and when the movie hits its high notes, it is quite entertaining.

WHY RENT SOMETHING ELSE: Not enough high notes. Feels more like a made-for-cable movie.

FAMILY VALUES: The violence is pretty much off-the-chart, there are a few sexual references and a good deal of swearing permeates the soundtrack.