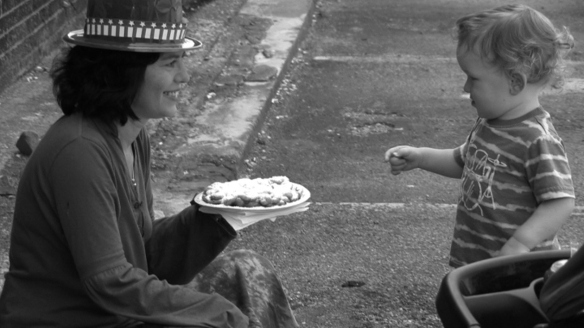 What could be more American than funnel cake on the Fourth of July?

Being alone in a city where you know nobody can be daunting. Sometimes all you can do is play tourist, particularly when you have a lot of time on your hands. While it can be liberating to be alone in a city – you make all the decisions about where to eat, what to do, when to do it and so on – it can also reinforce the loneliness in your own life at home.

Krasi (Stoykova-Klemer) is a Bulgarian poet and playwright who has just taken second place in a theater competition. First place got to see their play produced in New York City. Second place got Lexington, Kentucky. There was no third place.

So she’s left Bulgaria for the bright lights and big city of Lexington but things almost immediately begin to get strange. First of all, Debbie (Cummings), the stage manager who was supposed to meet Krasi at the airport is quite late; she seems flustered as the play is in technical rehearsals and opens just a few days hence. She dumps Krasi at her non-descript hotel and rushes back to the theater, leaving Krasi on her own.

Not knowing anything about the area, Krasi decides to explore downtown Lexington…on foot. It’s a bit of a walk from her hotel but doable, so she puts on a nice dress and heads out, all dressed up and nowhere to go from a literal standpoint. While the downtown area is pleasant enough, there aren’t a lot of people there and those that are aren’t particularly hospitable.

The name of the play that Krasi wrote is Black Coat and is autobiographical. Andy (Erickson), the actor portraying her father seems quite nice; Jeremy (Case), the director is also flustered but friendly at least; Natalie (Burger), the young actress playing Krasi as a teen is a bit withdrawn, spending time practicing on the violin when she’s not texting her friends but is more focused on schoolwork and getting into college than on picking Krasi’s brain for insights which Andy is more prone to doing. Andy takes Krasi to a beautiful urban park in Lexington which she appreciates but his invitation to dinner seem to create a distance between them.

She takes a tour of a local horse farm which is where Kentucky Derby runner-up Proud Citizen resides. She appreciates the horse and a pony that she gets to meet very much; there are statues of horses all over downtown Lexington but no actual horses. Lucy (Allison), the tour guide, befriends Krasi and invites her over for dinner where Krasi becomes enchanted with Elliot (Haynes), her 3-year-old son. Krasi eventually spends the night.

The next day is the Fourth of July and Lucy invites Krasi to go downtown and see the festivities. There’s funnel cake and parades, and eventually fireworks but while they are there Lucy meets an ex-boyfriend. She initially doesn’t want to get his attention but Krasi makes sure that he notices her and the two converse. The ex wants to take Lucy out and Krasi insists that Lucy go, promising to take Eliot home and watch over him until she returns.

She’s eventually gone overnight and Krasi goes outside after Elliot goes to sleep to play with sparklers, neglecting to lock the back door when she comes back in. After she falls asleep, Elliot wanders outside. When Lucy does eventually return, she is panicked to find that Elliot isn’t in his bed. She eventually finds him nearby but Krasi is absolutely mortified and leaves, having a lot to do as that evening is opening night for the play in any case and then she’ll be returning home the next day.

There is more but this is more of a slice of life, five days in a different country for Krasi. Southerland, a Kentucky native, shoots this in black and white which gives it a kind of timeless feel that combines Eastern Europe with a bygone era in America. The lovely black-and-white cinematography really sets the tone for the film.

Most of the cast is made up of amateurs, several of them having local stage experience in the Lexington area but that’s it. They do a pretty solid job considering their lack of film experience. Stoykova-Klemer has no acting experience; she is a poet who has a radio show in the Lexington area whose voice caught Southerland’s ear and whose story inspired the character of Stasi. In fact, Black Coats is the name of Stoykova-Klemer’s published book of poetry which in turn inspired the play that bears its name in the movie.

Loneliness is a central theme here; most of the main characters suffer from it in one form or another. Horses are also a main element which seems pretty understandable as they are a major part of the world that is Lexington. Most of the time Krasi handles the loneliness with a smile, but she has at least one moment of self-pity during the movie which is also understandable. It’s hard not to feel sorry for yourself when you’re alone as nobody is there to do it for you.

A good deal of the movie was improvised by the actors, making the conversation sound real and unforced. The story gets a little disjointed though; although it all makes sense by the end, it meanders a bit during the five day period which is I suppose the way our own stories in real life tend to be told.

This isn’t a movie for everybody. Those who are impatient, require their movies to be loud and kinetic will find this to be boring, which it most assuredly is not. This is a reflection of life and of an outsider looking at America through an outsider’s prism. We have a tendency to take things for granted over here, the kind of things that are hard to come by in lands less blessed by freedom and plenty than we are. We sometimes fail to realize how enviable our lives can be but then again, it is as human as it gets to want more than what we already have…or at least something different.

REASONS TO GO: Amateur cast comes through. Surprisingly conversational. Slice of life.
REASONS TO STAY: May be too low-key for some. A little bit scattered.
FAMILY VALUES: Suitable for all audiences.
TRIVIAL PURSUIT: Lucy’s 3-year-old son is her 3-year-old son in real life.
CRITICAL MASS: As of 4/13/15: Rotten Tomatoes: no score yet. Metacritic: no score yet.
COMPARISON SHOPPING: Lost in America
FINAL RATING: 6.5/10
NEXT: Once Upon a Crime: The Borelli-Davis Conspiracy