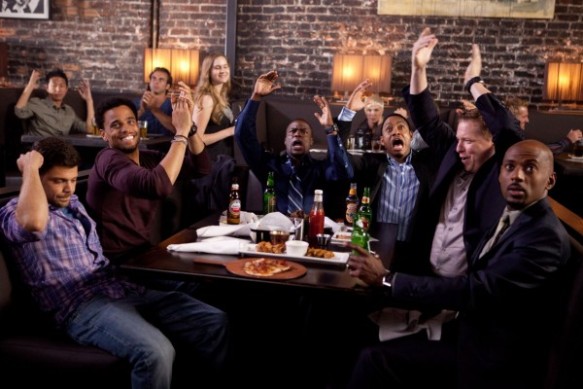 The cast gets the box office figures for the film.

Navigating the waters of modern relationships is tricky at best. A woman can use all the help she can get frankly – even if it comes from a man.

Ostensibly based on comedian Steve Harvey’s self-help book Act Like a Lady, Think Like a Man the film follows four different couples trying to make a go with it – the Dreamer vs. the Woman Who is Her Own Man pitting Dominic (Ealy), a struggling sous chef with ambitions of owning his own restaurant someday against Lauren (Henson), a self-made woman who has worked hard to make a success of herself.

Then there’s the Mama’s Boy vs. the Single Mom which pits Michael (J) whose life has been spent trying to please his mama (Lewis) against Candace (Hall) who finds her boyfriend’s mom an obstacle despite her best efforts to please her as well. There’s also The Non-Committer vs. The Girl Who Wants the Ring, which gives us Jeremy (Ferrara), a confirmed bachelor who is in no hurry to take the next step and his girlfriend Kristen (Union) who is and will go to whatever lengths necessary to push him into popping the question.

Finally there’s The Player vs. The 90-Day Rule Girl with Zeke (Malco) a smooth lady’s man who loves ’em and leaves ’em and doesn’t seem to mind against Mya (Good) who has a strict policy of never dating a guy for more than 90 days. Both of them find in each other the person they want to make the exception to their normal modus operandi.

I’ll be honest with you; when I saw the trailer for this I really wasn’t very interested in seeing the movie – it seemed to be just another rom-com with an attractive ensemble cast in which misperceptions and untruths put the characters in hot water, particularly situations that can be resolved with a single phone call in the real world. However, I was pleased to discover that the movie had much more going for it than cliché although it has its share of those.

The cast is certainly about as attractive as they come, and there’s a pretty good rapport among them. The chemistry within all four of the couples is pretty solid and there’s additional comic relief from Kevin Hart as a happily soon-to-be-divorced man and Gary Owen who offers the counterpoint as a happily married man. While there are a few too many coincidences, you can believe that these are actual friends trying to help each other find someone to spend their lives with.

The conceit of the movie is that all four of the women are using Harvey’s book to help them overcome the issues their men bring to the table and the guys find out about it and attempt to turn the tables on their girlfriends with predictably disastrous results. Like with most Hollywood movies the ending is what you’d expect it to be – who wants to go to a date movie to see a couple break up after all – but let’s face it, not only are you rooting for these couples to make it work as Tim Gunn might say, but you’re actually enjoying the time you spend with them…which is pretty good news for Screen Gems since they’re making a sequel which will be in theaters next Spring. Frankly, I wouldn’t mind catching the next installment in a theater next time instead of on home video if it’s going to be anywhere near as good as this.

WHY RENT THIS: Funnier than I expected. Explores the differences between how men and women think. Some pretty decent performances.

WHY RENT SOMETHING ELSE: Falls into a lot of rom-com traps. Tries too hard to be inoffensive.

FAMILY VALUES:  There is a whole lot of innuendo and some blatantly sexual commentary, a fair amount of bad language and some brief drug use.

TRIVIAL PURSUIT: During the course of the film, Dominic discusses For Colored Girls with his pals and in particular the scene in which “the psycho drops his kids out the window.” Ealy, who plays Dominic, also played the role of that very psycho in the film version of For Colored Girls.

NOTABLE HOME VIDEO EXTRAS: A 5 minute gag reel is included but there is really not much in terms of extras on the DVD.

COMPARISON SHOPPING: Why Did I Get Married?.

NEXT: The Europa Report