Everyone ready to party with Ma?

High school is a time when we find ourselves, or at least begin to. One of the things we explore is alcohol. It’s illegal – forbidden – so naturally, we have to check it out. Teenagers are natural contrarians to begin with, so telling them they can’t do something is tantamount to giving them incentive to do just that. A friend of mine who fancied himself a wag once said that the only way to get his teenage daughter to do her homework was tell her she wasn’t allowed to do it.

Young Maggie (Silvers) has moved to a small town in Ohio with her freshly-divorced Mom (Lewis). Her mother grew up there and still has a lot of her friends living there. Maggie is a bit on the shy side, but quickly makes a bunch of friends and just as quickly finds out that there’s not a lot for kids her age to do in town other than to score some alcohol and find a place to party, mainly in places that are probably not ideal for a bunch of drunk kids to hang out in.

Trying to get an adult to buy some liquor for them proves to be difficult until along comes Sue Ann (Spencer), a veterinary assistant who remembers what it’s like to be young. She offers her basement for the young people to party in, once she buys the laundry list of liquor that they provide her. She just has a few ground rules; no spitting on the floor, no taking the Lord’s name in vain, and under NO circumstances are the kids to go upstairs.

At first, the situation seems to be ideal – a safe place to get hammered, and Sue Ann turns out to be a fun party thrower. She gets everyone to refer to her as Ma, and soon she starts to become more and more entwined in their lives. It starts to get more than a little creepy and when the kids start to push back, they start to realize there’s something seriously wrong with Sue Ann.

Spencer won her Oscar under the direction of Taylor, so it’s no surprise that she turns in another brilliant performance here. Sue Ann is a complicated emotional creature and often her moods spin on a dime, from motherly to sexual to full-on rage-aholic. Sue Ann isn’t completely evil; there’s some pathos to her story and Spencer makes the audience believe that here is a seriously wounded psyche. We feel bad for her – until she snaps.

The problem here is that the most relatable character here is Sue Ann. The teenage kids with the possible exception of Maggie are all seriously self-absorbed and borderline cruel. Most of them are pretty much interchangeable. The adult roles have some strong actors, including Janney, having a ball as a bossy vet, and Lewis who for my money has been criminally underrated throughout her career.

The movie takes a while to get moving, but once it does Taylor knows what to do with it. Spencer is definitely the reason to see this, but she’s got some decent support – although not enough to elevate this out of middlin’.

REASONS TO SEE: Spencer gives her usual strong performance.
REASONS TO AVOID: Hard to root for anybody in this typical “teens in trouble” romp.
FAMILY VALUES: There is violence – some of it brutal – as well as sexual content, teen drinking and drug use, profanity throughout, and some disturbing images.
TRIVIAL PURSUIT: Taylor previously directed Spencer and Janey in The Help.
BEYOND THE THEATER: Amazon, AMC On Demand, AppleTV, Fandango Now, Google Play, Max Go, Microsoft, Movies Anywhere, Redbox, Vudu, YouTube
CRITICAL MASS: As of 10/30/20: Rotten Tomatoes: 55% positive reviews; Metacritic: 53/100.
COMPARISON SHOPPING: Uncle Peckerhead
FINAL RATING: 6/10
NEXT: Six Days of Darkness concludes! 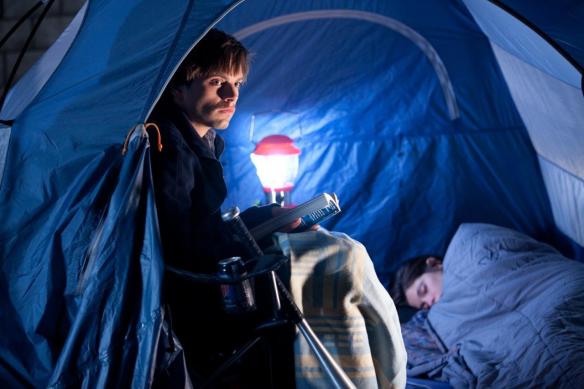 When the going gets tough, the tough go camping.

There are a lot of things that are at the moment unexplained. Ghosts, for example; while there is yet no definitive proof of their existence there’s enough anecdotal evidence that the possibility remains that there is something there. Some scientists in an effort to make a pre-emptive strike in case that definitive evidence comes to light are positing that ghosts (and other paranormal phenomena) are the results of disturbances in electromagnetic fields.

Science by its nature strives to understand the hitherto unknown and the supernatural would certainly fall into that category although science also has a tendency to pooh-pooh the existence of such things with a kind of snarky arrogance that comes from thinking that science has any sort of grasp on how the universe actually works. For the record, if everything that was knowable could be condensed to all the hot dogs ever consumed, human knowledge would constitute less than a bite of a single hot dog. Then, of course, is the maxim about not messing with things we don’t understand.

A group of student scientists do exactly that as they attempt to use scientific means to replicate an experiment that attempted some thirty years earlier to communicate with a recently deceased student. What happens is well nigh impossible – something powerful manifests itself and one of the researchers (Guill) is sucked through a vortex in a solid wall. Sucks to be her.

Cut to modern day suburbia. Kelly (Greene) and Ben (Stan) live in a new home in a nice development that her parents are renting to them (they had bought it as an investment). They’re the first occupants and it’s so new that most of the other homes in the subdivision are as yet vacant, although that may have as much to do with the economy as it does to the recentness of the construction.

But weird things begin to happen. Things move seemingly on their own. Lights turn on and off. Strange noises can be heard in the night. Weird mold appears on the walls. Soon those things begin to get more and more disturbing as Kelly’s clothes are shredded and a neighborhood dog ambles into their home and drops down dead.

Not a little freaked out, Ben and Kelly leave and move into a hotel room but the attacks continue. Finally they are contacted by Patrick (Felton), one of the researchers among the student scientists who explained that a malevolent entity had used their experiment as a kind of portal into this world. But why are they targeting Kelly and Ben? I’ll bet you can guess.

Horror movies tend to borrow from several different sources and quite frankly, I don’t have a problem with that as long as it’s done well. Here, you’ll see bits of Poltergeist, Paranormal Activity and Incubus in the mix and unfortunately, not done particularly well. For one thing the first twenty minutes of the movie is made up of trips to Costco and chores around the house, all set to dialogue that no real human being would utter. A test a screenwriter can always use to determine if their dialogue is authentic is to actually say it out loud; I doubt the writers of this movie used that method.

Another issue is Greene. She’s actually not a bad actress, one of the better ones to come out of the Twilight series but here she has absolutely no charisma or life. She’s portrayed to be a pretty self-confident woman but then she’s objectified by being dressed in the skimpiest of outfits, and at the end of the day her self-confidence seems to descend into bitchiness. Her character is as thoroughly unlikable a scream queen as I’ve ever seen and I wound up feeling kind of bad for her. Hopefully next time she’ll choose her project more wisely.

Stan, who has garnered some attention in Gossip Girl as well as Captain America: The First Avenger is actually pretty strong as a leading man. Even though he doesn’t generate much chemistry with Greene, nonetheless he does capture your attention when he’s onscreen. He has some decent potential which hopefully will get realized further down the line.

There are a few decent scares and the presence of Draco Malfoy…er, Felton…in a good-guy mad scientist supporting role is a plus as well. Still, suburban ranch homes are a little harder to generate scares from than the spooky Victorian down the block. It is established near the end of the film that in order for the entity to do any harm to you, you have to believe in it first. I suppose I’m safe from this guy because I didn’t believe it for a second.

WHY RENT THIS: Some decent scares. Stan is promising as a leading man.

WHY RENT SOMETHING ELSE: Ghastly performance by Greene. Takes way too long to get started. Predictable.

FAMILY VALUES:  Some disturbing and horrible images as well as a bit of sexuality.

TRIVIAL PURSUIT: Warner Brothers was required to release this film to finish out their contract with Dark Castle, the production company that made it. They delayed the movie for over two years, spoiled the ending in the trailer and booked the fewest number of screens for a wide release in the studio’s history.

NOTABLE HOME VIDEO EXTRAS: There are several featurettes having to do with Joshua Warren, the film’s consultant on the supernatural, including a tour of haunted Asheville, North Carolina (apropos of nothing  since the movie was filmed in the desert community of Palmdale just outside of Los Angeles) and a re-creation of the experiment depicted in the film.