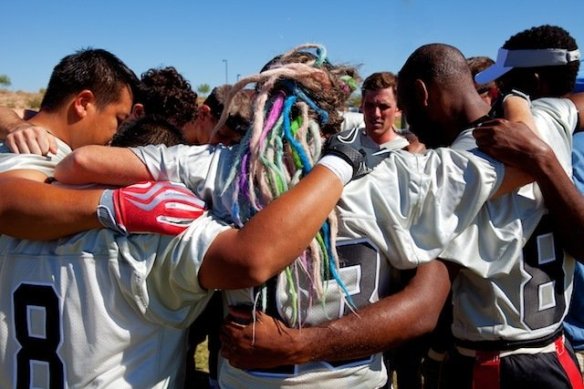 A band of brothers.

There is a misconception of gay men that they are limpwristed and effeminate who are more into figure skating than football. The truth is that there are all sorts of gay men; some are indeed more in touch with their feminine side but there are others who are just as macho as Mike Ditka.

The National Gay Flag Football League grew out of pick-up games that gay men put together to play football. Many found playing football in any sort of competitive manner to be uncomfortable for them while others wanted to use it as a means of meeting new people with similar interests. Something unexpected happened however; the teams of predominantly gay players began to bond. Like, really bond as brothers. Starting in New York City, the idea of gay leagues began to catch on in cities around the country. Eventually, the National Gay Flag Football League was born.

A competitive tournament of gay teams around the country culminating in a championship game was the brainchild of sportswriter Cyd Ziegler, himself an ultra-competitive football player. His team, the New York Warriors, became the dominant team winning three Gay Bowl championships in a row. In Gay Bowl IX however, they were dethroned by the Los Angeles Motion led by – Cyd Ziegler who had moved out to the City of Angels.

The Warriors, led by team captain Wade Davis (a former NFL player) were chomping at the bit to regain the title that they’d lost. The Motion, sporting two of the best quarterbacks in the league in reigning MVP Drew Boulton and Christophe Faubert, were just as motivated to repeat. The dark horse was the Gay Bowl X hosts the Phoenix Hellraisers, led by quarterback Joey Jacinto who has a cannon for an arm and Jared Garduno, the team’s heart and soul.

The documentary follows the three teams as they prepare for the weekend event. We hear from the players, many of whom found the acceptance here that they couldn’t find in the gay bar and club scene. As the movie goes on some of the players talk openly about their coming out and some of those stories are heartbreaking. Davis tells us that his extremely religious mother, whom he had been especially close to as a child, essentially washed her hands of him. Los Angeles captain Brenton Metzler talks humorously of how his sister, a lesbian wishing to deflect her parents attention away from herself, outed him against his wishes.

There are a lot of clichés about football, how it builds character and forges bonds not unlike those forged by soldiers. One of the movie’s chief successes that as the movie goes on we begin to realize that these aren’t just gay men; they’re men period. Just like straight men. No difference whatsoever. Well, other than the fact that they prefer men as romantic and sexual partners.

A word about the latter; the tagline for the film “A documentary about coming out…and scoring” does a disservice to the movie. Throughout the film the players make it clear that there is nothing sexual for them about playing the game; it’s all about the competition and the game itself. Their minds aren’t going to “His tush sure looks good in those jeans” for the most part. The sexual innuendo of the tag line contradicts this stand and reinforces the perception that gay men have no control of their sexuality. Well, no more than straight men do anyway. Come to think of it, the film’s title doesn’t do its message any favors either. These men are as tough as nails regardless of their sexuality but I suppose that since the point is trying to change perceptions of gay men that to a certain extent their sexuality has to be part of the equation but still it feels like they could have been a bit more sensitive to the film’s overall message that these are talented, hard-working and masculine football players who happen to be gay. Their sexuality is part of who they are but it isn’t the only thing that defines them.

The movie spends an inordinate time at player practices to the point of tedium. The cumulative effect of this is that when the actual games are played, it becomes anticlimactic to the viewer. Other than the actual championship game, little time is spent on any of the other games that go on in the tournament (the winning team and runner-up will have played seven games in the course of three days which is grueling for any kind of athlete) other than brief snippets and scores. We don’t really see the results of all the practicing until that championship game and even then we don’t really get a sense of the teamwork that goes on.

I’m not sure that this is essential viewing from a cinematic standpoint but from a social standpoint this film is a teaching moment, serving to humanize gay men and put faces on them that aren’t necessarily RuPaul’s (although some of the Phoenix players don dresses to put on a charity fundraiser drag show). Anything that is going to help break down stereotypes is a winner in my book.

REASONS TO GO: Your perception of what gay men are might get changed. The outing stories are heartbreaking in places.
REASONS TO STAY: Far too much time is spent observing practices.
FAMILY VALUES: There is plenty of profanity and some sports violence..
TRIVIAL PURSUIT: The most recent Gay Bowl was played in Washington DC. The 2017 edition will be played in Boston.
CRITICAL MASS: As of 6/20/17: Rotten Tomatoes: No score yet. Metacritic: No score yet.
COMPARISON SHOPPING: The Freedom to Marry
FINAL RATING: 7/10
NEXT: Hearing is Believing