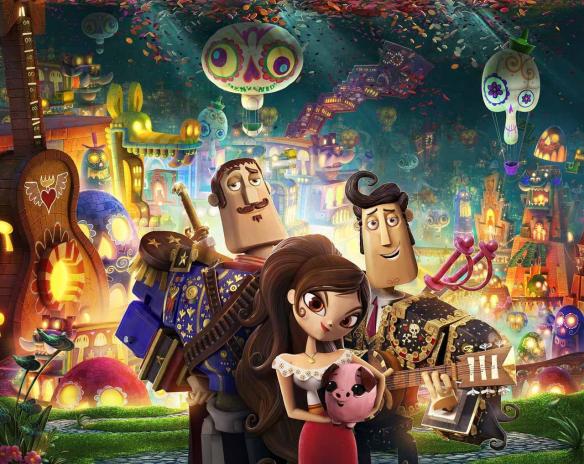 They say the only two sure things in life are death and taxes. That’s not strictly true; there is one other sure thing – that love wins out over everything. All three of those items however are sure things in all cultures although they tend to put their own spins on everything. Take Mexico, for example.

At a museum a group of snot-nosed little brats are given a museum tour by the bemused Mary Beth (Applegate). She brings them into an as-of-yet unopened exhibit on Mexico and presents to them the Book of Life, an amazing magical book that contains all the stories ever written and proceeds to present to them a story from San Angel, a small village in Mexico. The town lives constantly in fear of the reprehensible bandit Chakal (Navarro).

There Manolo (Luna) comes from a long line of heroic bull fighters including his prideful father Carlos (Elizondo) and an acerbic grandmother (deLisle). His closest friend is Joaquin (Tatum) whose father died a hero. Joaquin wants nothing more than to be the hero his father was, if not greater. With them is Maria (Saldana), a headstrong little charmer whose father General Posada (Alazraqui) is alcalde of the village of San Angel. Both boys vie for the hand of Maria, who is sent away to Europe to learn manners.

When she returns, she is a beautiful young woman. Joaquin has become a heroic soldier in defense of the town and in fact, all of Mexico. Manolo shows potential to be the greatest Sanchez of them all but longs to be a troubadour, guitar in hand and spends most of his free time playing mariachi music with Pepe (Iglesias) much to the disapproval of his father. The two young men resume their rivalry although they continue to be the best of friends.

Unbeknownst to anyone in the village, two rulers of the underworld – La Muerte (del Castillo), ruler of the Land of the Remembered and Xibalba (Perlman), ruler of the Land of the Forgotten – have taken interest in the situation with Manolo, Joaquin and Maria and have enacted a little wager. If Xibalba wins, he gets to rule the vibrant Land of the Remembered which is an eternal fiesta. Given that the Land of the Forgotten is a depressing wasteland, he will do whatever it takes to win the wager – including to cheat. He makes sure that not only does Manolo lose the wager but that he is bitten by a particularly venomous snake in the bargain.

Manolo awakens in the Land of the Remembered where souls who are remembered and loved by someone in world of the living, a colorful land that gets even more festive on the Day of the Dead (which is when I happened to see the movie – how is that for smart planning?) when the fiesta turns epic. Manolo meets his mother (de la Reguera) as well as other deceased members of the Sanchez family including the opera singer wannabe Jorge (Domingo). However, Manolo doesn’t want to be dead. He wants to return because his love for Maria is so strong.

Realizing that Xibalba had a hand in Monolo’s premature demise, Monolo’s family agree to help him go see The Candle Maker (Cube), a jovial god who is in charge of maintaining balance in the universe.  But the way to his domain is a perilous one and in Monolo’s absence San Angel is in mortal danger. Can Manolo save the day after he’s already dead?

The visuals here are charming and inventive, colorful and arresting. Based on Mexican folk art particularly the work of Jose Guadalupe Posada, the characters resemble wooden marionettes with a curiously human overlay. You’ve never seen anything quite like this.

While most animated features are fairy tales, this is folklore (there is quite a difference) even though the story is essentially an original one, it’s roots are in characters and symbols that exist in Mexican folklore traditions. Although a bit sugar coated and watered down, there is still some kernels of Mexico here and carry a flavor of that country that is as real and vibrant as a properly made guacamole.

Gutierrez wisely casts actors with distinctive voices that make their roles personable and memorable. He also casts a good deal of Hispanic actors in the role some of whom might be unfamiliar to you but are stars in Mexico, like telenovela heroine del Castillo, leading man Luna (who has appeared in a number of Hollywood films as well), action hero Trejo and comedians Iglesias and Cheech Marin.

There are also several gringos in the cast – Tatum, Elizondo (who is of Portuguese descent), Saldana, Ice Cube and Applegate. All of the cast, Hispanic and otherwise, perform admirably. The plot may be paper-thin and resemble typical animated plots in construction, but the visuals and Mexican cultural overlay elevate the movie from the typical.

Now there may be a few who take offense at some of the images – a giant mustache on Mexico as the center of a universe that looks uncannily like a sombrero and the characters who nearly all look like something out of a theme park version of Mexico with serapes, sombreros and facial hair adorning nearly every character. There is also the old trope of a woman being fought over like she’s the Publisher’s Clearing House prize. However, I suspect that this is not done so much as perpetuating stereotypes as it is making gentle fun of them as the filmmakers treat these things with affection. It is part of the Mexican culture to be humorously self-effacing.

It is nice to see an animated feature that isn’t largely just like all the others. Even Pixar has put out one or two of these lately. In a year where family audiences have been under-served, this comes as a breath of fresh air. Hopefully families will embrace this movie rather than reject it because of its cultural element; the soft box office it has had leads me to suspect that there are some families who are choosing not to see it because they aren’t interested in the Mexican culture at all. I hope not, but I do have to wonder in a country that has not grown out of its racist tendencies yet (as evidenced by draconian laws in Arizona and a refusal to overhaul its immigration policies aimed squarely at keeping Mexicans out) that this beautifully made feature hasn’t been a bigger hit than it is – or deserves to be.

REASONS TO GO: Wonderfully inventive and beautiful animation. All the voices have character.
REASONS TO STAY: Not sure if its making fun of racial and gender stereotypes or perpetuating them.
FAMILY VALUES: Some rude humor and mildly scary images.
TRIVIAL PURSUIT: Paul Williams was approached to co-write a pair of songs on the soundtrack because director Jorge R. Gutierrez was a fan of his work in Phantom of the Paradise.
CRITICAL MASS: As of 11/5/14: Rotten Tomatoes: 81% positive reviews. Metacritic: 67/100.
COMPARISON SHOPPING: Corpse Bride
FINAL RATING: 7.5/10
NEXT: Ouija