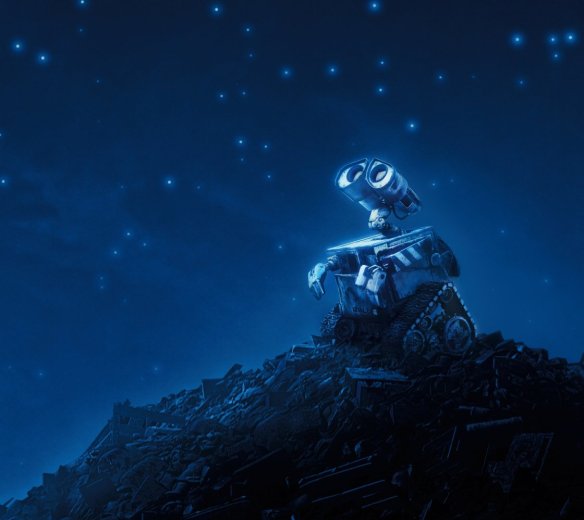 Apparently a robot can have more humanity than any presidential candidate.

800 years from now, Earth is an empty, dead garbage dump. It is no longer capable of supporting life. In this whimsical, magical animated tale from the geniuses at Pixar, it is tended to by WALL-E, who compacts the trash and stacks the bricks, trying to tend the planet until its human inhabitants return, but it is another robot – EVE – who returns and discovers a tiny little plant growing. She and WALL-E miraculously fall in love with each other, but EVE must report back to the Axiom that it is time for humanity to return.

Humanity, however, has become obese and lazy their every need tended to by robots who have a different program in mind. Beautifully animated with tons of heart, this is one of Pixar’s finest animated films and clearly one of the best animated features of all time. The slapstick humor may be a little much for some (reportedly director Andrew Stanton and many of the top creative people behind the movie watched scores of Buster Keaton and Charlie Chaplin movies for inspiration) but there is virtually no dialogue which helps make the magic even more…um, magical. This is definitely one of my favorite movies ever and it bears plenty of re-watching. Even Peter Gabriel’s closing credits song is perfect.

WHY RENT THIS: This is simply one of Pixar’s best ever. There are some big ideas made palatable for all ages. Love is front and center here. The characters are memorable and cute.
WHY RENT SOMETHING ELSE: Some may find it a little too slapstick for their tastes.
FAMILY VALUES: Perfectly suitable for all ages.
TRIVIAL PURSUIT: When WALL-E has fully recharged his solar batteries, he makes the same sound as the Apple “Boot-Up” chime which every Apple computer has made since 1996 but is finally being retired later this year.
NOTABLE HOME VIDEO EXTRAS: The 3-Disc DVD set includes the short Presto which was shown before the theatrical release of WALL-E, as well as a short focusing on the welding robot BURN-E, a series of promos for the Buy ‘N Large corporation (including a training video), a kid-friendly guide to the 28 robots shown in the film as well as a digital storybook read by Kathy Najimy featuring the characters from WALL-E. The 2-disc Blu-Ray also includes the full length documentary The Pixar Story and several 8-bit arcade-type games featuring the characters of the film.
BOX OFFICE PERFORMANCE: $533.2M on a $180M production budget.
SITES TO SEE: Netflix (DVD/Blu-Ray rental only), Amazon, Google Play, Vudu, YouTube
COMPARISON SHOPPING: Silent Running
FINAL RATING: 9.5/10