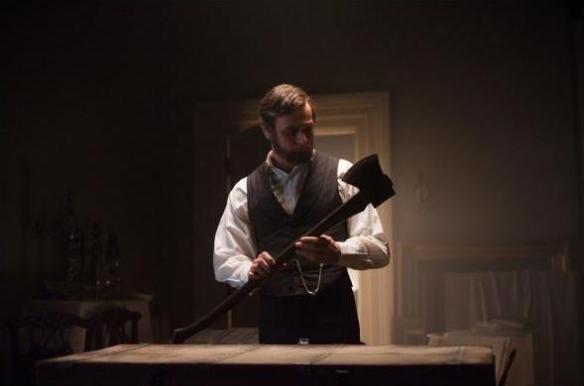 Axe not what your country can do for you…

Our nation’s 16th president is widely beloved, considered our most courageous and visionary president and for good reason. He led our nation through its darkest hour, freed the slaves and in general kept the nation together even as it was coming apart. He also rid the country of vampires. Yeah, that was him.

Of course, you might not be familiar with that last part but don’t worry. This isn’t a history lesson. It’s rip-roaring bloodsucking entertainment from the man who directed Night Shift and the man who wrote the book Pride and Prejudice and Zombies.

Abraham Lincoln (Walker) watches as his mother (McLeavy) is murdered by Jack Barts (Csokas), whom Abe’s father (Mawle) crossed when he protected his impetuous son from stopping Barts from whipping an African-American boy. Young Abraham wants revenge but his more level-headed dad makes him swear not to do anything foolish which Honest Abe does…until his father passes away.

Going to a bar to gather some liquid courage, Abe runs into Henry Sturgess (Cooper). Eventually, Abe discovers that Barts is a vampire and his guns are ineffective against him. Lincoln is saved by the intervention of Henry, but not before permanently scarring Barts by leaving the ball of his pistol in his eye.

Sturgess heals Abe’s wounds and tells him that the vampires have mostly been hiding out in the South as plantation owners, using the slaves as a food supply. Abe, studying for the law, is also trained by Henry in the fine (or not-so-fine) art of vampire hunting – and not a Scooby in sight (obligatory Buffy reference considering the subject matter). Having had a bad experience with guns, Abe prefers the silver-coated axe as his weapon of choice.

Sturgess sends the newly martial arts-trained Abe to Springfield to practice law. There he meets shopkeeper Joshua Speed (Simpson), who hires the young man and allows him to stay in a room above the store. The two become fast friends but coming back into Abe’s life is Will Johnson (Mackie), the young boy Abe saved from whipping years ago. Also in his life; Mary Todd (Winstead), the fiancée of rising political star Stephen Douglas (Tudyk).

By night, Abe kills local vampires and chafes for the chance to get his hands on Barts. Finally, when Sturgess finds out that Abe has been making friends and fallen in love, he warns him that he’s making a horrible mistake – these people will be endangered by the things Abe does at night. And that’s just what happens. Once Abe finally gets his hands on Jack Barts, people – okay, vampires – take notice. In particular, Adam (Sewell) who is the leader of the vampires here in the States, a creature who has lived since the days of the pharaohs and who is eager to establish a nation of his own for his kind – the Confederate States of America, for one.

He and his sister/enforcer Vadoma (Wasson) hatch a plan to bring Lincoln to them, kidnapping Will and bringing him to their New Orleans plantation. Abe and Speed rescue him by the skin of their teeth, but Abe determines to fight Adam in a less direct way – through politics. Abe’s determination and vision leads him to the White House.

However, Adam has been busy as well, allying with Jefferson Davis (Rothman) to supply vampiric troops to overcome the numeric superiority of the North as well as their armament. With unkillable soldiers, Adam and the Southern generals decide to put an end to the war by invading, leading to a place called Gettysburg. Realizing that the only hope of defeating the army of the undead is to arm his own troops with silver ordinance, Abe, Will and Joshua set out on a desperate train ride from Washington to Pennsylvania. The entire nation’s future hangs in the balance but Adam knows he’s coming.

This is an idea that does tend to stretch one’s tolerance for fantasy. That it has been largely unsuccessful at the box office speaks more about the imagination of the moviegoing public than that of the specific filmmakers here. The movie is certainly filmed in dark tones with bright moonlight. There is certainly a gothic feel to the film but with more of an action sensibility than, say, Dark Shadows.

The special effects are okay, though not ground-breaking in most senses. However, there are a couple of scenes which are done rather badly – the scene where Lincoln chases Barts through stampeding horses – where the horses look like something out of a computer game, complete with a dun-colored sky. It looks fake and pulls the audience right out of the reality of the film.

I have no problems with fudging with history to suit the needs of the story, although here some of it was, I thought, unnecessary. Making Will Johnson a lifelong friend instead of someone he met in Springfield (which is, as I understand it, what actually happened) or having Joshua Speed as part of Lincoln’s inner circle in Washington (in reality he declined to leave Springfield and sent his brother James whom Lincoln liked less in his stead) doesn’t really make the story any easier – it’s just simpler to write it that way.

Mackie is a fine actor who brings some gravitas to the role of Johnson. Simpson as well, who is channeling Christian Slater to my mind, gives Joshua Speed a fairly ambiguous role which aids the story nicely in the last reel. Winstead is an underrated actress who has done admirably well in a bunch of movies that haven’t been as good as her performances. It’s no different here; hopefully she’ll be cast in a movie that’s worthy of her talents soon.

The main problem here is Walker. He might be a fine, capable actor but this is a part that is almost impossible to pull off to begin with – Abe Lincoln as an action hero? Doing Matrix-like moves while wielding an axe like something out of a Tsui Hark movie? Uhhhhh…it’s kind of entertaining, I have to admit, while you’re watching it. Thinking about it now, reading it on paper…sounds kind of dumb. The other issue is that Walker has moments where he really carries the essence of the Great Emancipator. At others though, he seems to be floundering, not quite sure how to capture Lincoln’s natural self-effacing demeanor and homespun humor.

This is entertainment, pure and simple. There is no moral message, and if you take this as a history lesson you’re clearly insane. This is meant to keep you on the edge of your seat for a couple of hours. Nothing more, nothing less. The movie isn’t always successful at it but it succeeds more than it fails. If you’re willing to give the concept a shot and throw logic and history out the door for two hours while you’re in the air-conditioned cinema, then you might actually be surprised at how good this is.

REASONS TO GO: Plenty of action and some nifty effects. Mackie, Cooper and Winstead are all solid.
REASONS TO STAY: Walker’s performance is a bit inconsistent. Too many liberties with history and facts. Some of the CGI is surprisingly poor.
FAMILY VALUES: There is quite a bit of violence as well as a hint of sexuality.
TRIVIAL PURSUIT: The man in the film’s final scene who is approached in a similar manner as Abe was recruited was played by book and screenplay author Seth Grahame-Smith.
CRITICAL MASS: As of 7/2/12: Rotten Tomatoes: 34% positive reviews. Metacritic: 42/100. The reviews were mostly bad.
COMPARISON SHOPPING: Near Dark
GETTYSBURG ADDRESS LOVERS: Walker recites the speech here in a re-creation of the address.
FINAL RATING: 6/10
NEXT: The American Experience series begins