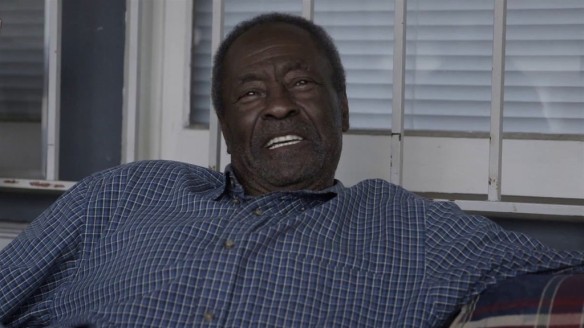 There is something soul-enriching about going into the yard and planting a garden. The serenity that comes from working with the earth, watching seeds sprout into life and grow into plants bearing fruit and vegetables that we take for nourishment; few things are as wonderful and as satisfying as eating something you’ve grown yourself.

In South Central L.A., one of the most dangerous and violent neighborhoods in the country, that isn’t always an easy proposition. Ron Finley, a local resident, was tired of having little more than fast food available to him as a nutrition option and with grocery stores selling mainly prepared or unhealthy items and no alternatives for healthy organic vegetables, he chose to grow his own. His garden, on the verge in front of the house, grew to enormous heights which turned into an oasis of beauty in a neighborhood of vacant lots, barred windows and trash. When he was cited for violating an ordinance preventing residents from planting anything but grass on the city-owned verge, he fought  the ordinance  which attracted the attention of Los Angeles Times columnist Steve Lopez. Lopez’ articles would eventually help turn the tide.

Other residents of the area were also inspired. Ex-convict Hosea Smith, living in a halfway house after being paroled from a thirty year manslaughter sentence, helped himself reintegrate into society by planting his own garden, along with his roommate Henry, also an ex-con. The two men formed a common bond by their love of growing things.

Kenya Johnson, an orphan, and Mychael “Spicey” Evans, a drug dealer, were both affiliated with gangs in South Central which is pretty much infested with them. The two found some relief through the Compton Community Gardens through a youth pastor there. Eventually the two, who had adjoining plots in the garden, became close friends and maybe more.

Quimonie Lewis, a precocious eight-year-old girl, likes planting things and wants to eat healthy things. With the help of her father, the Housing Project President where they live, she puts together a garden of her own, planting things like cantaloupes, tomatoes and peppers – all things she likes to eat. Her father, who has a heart condition, insists on eating an unhealthy diet, eventually being stricken with a serious heart attack. Quimonie sees her garden as a means of saving her dad’s life as well as a means of earning extra income for the family.

All of these stories are told through the warm eyes of director Vallot, who has a background as an actress and a dancer. Her camera movements are graceful as you would imagine a dancer’s would be, catching the jet planes that fly over South Central in mid-flight, going places most of the people who live there will never see. The sounds of gunfire, police sirens and jets are the constant soundtrack of South Central.

This is a gentle documentary, one that tells a story that actually can bring the viewer a feeling of inner peace as we watch how these people are directly affected by working with the soil and the sunshine and the water and the seeds, all that is needed to bring about life. As Hosea puts it, we all come from the soil and feel a connection with it.

Finley comes off as the most eloquent advocate. His efforts landed him a speech at a recent TED conference which has millions of YouTube views since it was posted; he isn’t what you’d call polished but the passion is there and so is the wisdom, although it is wisdom gleaned from the streets of South Central.

There’s an inspiring message to be had here; we can change the environment around us by something as simple as planting a garden, but it can go beyond that as well. For those who feel powerless and without any control, these are people who persevered and got something impressive done. Even Spicey, who was without work for more than two years, finds a job.

The editing could have used a little bit of work; some of the stories don’t flow as well as they should and in places we find out background information near the end of the movie that we could have used to put the film in context from the get-go, which makes for frustrating viewing; even the reveals have the subtlety of a sledgehammer.

I did like the documentary, although I felt it could hav used a little more time in the editing bay. With a defter touch, this could have really been something special but even so, the story is compelling and the film overall is inspiring. Not a bad way to be remembered if you ask me.

REASONS TO GO: Laid back and serene. Finley and Smith are compelling advocates.
REASONS TO STAY: A little disjointed. Lacks context.
FAMILY VALUES: Profanity throughout and drug use.
TRIVIAL PURSUIT: One of the executive producers on the film is singer John Legend.
CRITICAL MASS: As of 12/2/15: Rotten Tomatoes: No score yet. Metacritic: No score yet.
COMPARISON SHOPPING: The Garden
FINAL RATING: 6.5/10
NEXT: Bone Tomahawk