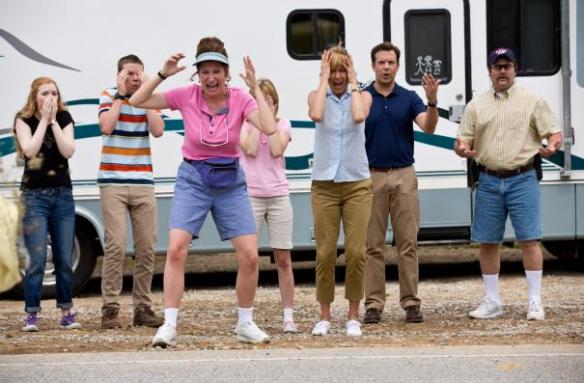 The cast gets their first look at the finished film.

What could be more middle America than a road trip vacation with the whole fam damily in the ol’ RV? Nobody is going to take a second look at one of those, not even George Zimmerman even if the entire family is wearing hoodies and munching on Skittles.

David Clark (Sudeikis) is a low level drug dealer; he has a certain moral compass (he doesn’t ever deal to kids, even 18-year-olds) and is part of the neighborhood fabric, making deliveries like the milk man used to. He lives in an apartment building where his neighbors include the dorky latchkey kid Kenny (Poulter) and the grouchy stripper Rose (Aniston).

When David gets robbed of all his cash, he knows he’s in deep to his supplier, Brad (Helms). However, Brad gives David an assignment; go to Mexico, pick up “a smidge and a half” of weed, and bring it back to Denver and not only will the debt be forgiven but he’ll get the standard courier rate of $100K. David isn’t exactly leaping at the opportunity to be a drug smuggler with potential federal ramifications but he doesn’t have much of a choice.

He’s a bit worried on how exactly to go about it when he hits the idea of the family RV road trip. Nobody at the border will give him a second look, particularly if he clean up and shaves. However, David is single so he’ll have to rent a family. Kenny is all in, and David convinces a street urchin named Casey (Roberts) to be the daughter. That leaves mom.

David approaches Rose but she – having an ingrained distrust of drug dealers to begin with – isn’t having it. However her finances are, shall we say, in crisis so reluctantly she agrees to get on board. And of course, we know this isn’t going to be a trip one is going to show home movies of afterwards.

As with most R-rated comedies these days there’s a fair amount of raunchiness although surprisingly less than you might expect. There’s plenty of drug humor although not so much of the Cheech and Chong variety; this is a stoner film where nobody gets stoned. Then again, it really isn’t about the marijuana.

Aniston plays very much against type; ever the girl next door, she does one scene where she delivers a pretty hot strip tease (down to her undies – sorry pervs) and she’s not so much brassy as she is grumpy, but she is definitely the star attraction here. Sudeikis meshes well with her, maybe as well as any actor since David Schwimmer, and plays against his usual nice guy type as well.

Hahn and Offerman are hysterical as a straight-laced couple also on an RV adventure who aren’t as straight-laced as they might lead you to believe; Offerman’s career in particular is really taking off and I suspect it won’t be long before he’s headlining some big flicks of his own.

There are some really wicked bits here, including a girl-on-girl action scene, one in which Kenny is taught how to properly kiss a girl, and an adverse reaction to a spider bite. A lot of the humor has to do with taboo sex and those whose values are a bit straight-laced might be offended – of course not many of those will be lining up to see a comedy about drug smuggling I would think

I didn’t have particularly high hopes for the film – the comedies this summer have been a pretty dismal lot in general and I suspected that the funniest bits of the movie might well be in the trailer but that doesn’t turn out to be the case (although the trailer hints at them). While the ending is a bit predictable, the cast – particularly the core family cast – get on so well that you feel a genuine affection for the lot of them by the film’s end and do stay for the credit roll outtakes; one of the funniest moments in a movie I’ve seen all summer can be found there.

We’re the Millers is one of those summer movies that the expectations are pretty low for and manages to exceed them. In a summer where most movies haven’t met the expectations set for them, mild or not, it’s a breath of fresh air. Well, maybe Detroit-smelling air. Not really fresh mountain air. You smell what I’m cooking.

REASONS TO GO: Laugh out loud funny. Nice chemistry between Sudeikis and Aniston. Offerman and Hahn nearly steal the show.

REASONS TO STAY: Those who don’t like drug humor might take offense. Pushes the taboo sex angle a bit hard.

FAMILY VALUES:  Oh, where to begin? A ton of foul language, plenty of drug humor, a ton of sexual references and one scene of brief but unforgettable nudity (as in you can’t un-see it once you’ve seen it).

TRIVIAL PURSUIT: Poulter stayed up all night listening to TLC’s ”Waterfalls” in order to learn the rap portion properly for shooting the following day.

NEXT: Life, Above All

In the future, the haves have left the building and moved to a snazzy new space station in Earth orbit where disease, hunger and want are unknown. The have-nots i.e. us are left to make due on a resource-depleted Earth where every day is a struggle for survival and all of our earth benefits those living above. One desperate man will risk everything to make it up to Elysium; hanging in the balance is not only his life but the lives of millions.

See the trailer, clips, featurettes and a promo here.

Rating: R (for strong bloody violence and language throughout)

(UTV) Shah Rukh Khan, Deepika Padukone, Rani Mukerji, Rajnikanth. A grieving young man carrying his father’s ashes to scatter on a sacred river meets a lively young girl on the train journey south. He meets her eccentric family and falls deeply in love with her despite a language barrier. They will take a romantic journey that will showcase the beauty and liveliness of the land and people of South India.

(20th Century Fox) Logan Lerman, Alexandra Daddario, Brandon T. Jackson, Nathan Fillion. When their home and sanctuary comes under brutal attack, the only thing that can save the demigods is the legendary Golden Fleece. However, the artifact rests in the Sea of Monsters – what we humans call the Bermuda Triangle – and is guarded by some pretty tough customers.

Rating: PG (for some rude humor and action)

See the trailer, a promo and a featurette here.

Rating: PG (for some mild action and rude humor)

(New Line) Jason Sudeikis, Jennifer Aniston, Emma Roberts, Ed Helms. A mild-mannered pot dealer get into deep debt with his supplier who in turn promises to wipe out his debt if he will go to Mexico and bring in a shipment of product. Knowing he’ll never get over the boarder without being searched himself, he enlists a stripper, a street punk and a nerd from his apartment building to pose as his family, thinking nobody will give them a second glance. Turns out that it’s a lot easier said than done.