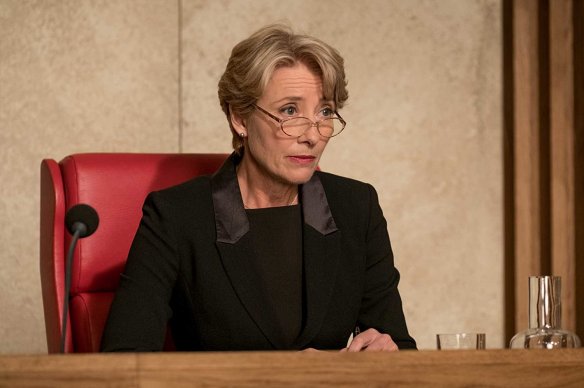 .The things that make a judge a wise and diligent arbiter are the same things that destroy a marriage. The cost of making the right call weighs heavily on the bench.

That’s the message in this 2017 adaptation of a 2014 Ian McEwan novel. Oscar winner Emma Thompson stars as Fiona Maye, a justice in the High Court presiding over cases involving children. Fresh off of giving a hospital the right to separate conjoined twins that will result in the death of one of them, she is given the task of a boy just shy of his 18th birthday who is refusing a blood transfusion that would save his life. He was brought up as a Jehovah’s Witness who believes that the blood is where the soul resides and that the mixing of blood is blasphemy. Even though refusing the treatment would kill him, the boy – Adam (Whitehead) – holds that his religious beliefs are more important.

At the same time, her academic husband Jack (Tucci) has become fed up with the lack of intimacy in their marriage and, frankly, the lack of presence by his wife. He wants to have an affair, even though he professes to still love his wife. Fiona is having none of it. Jack leaves.

Fiona throws herself into the case as a way of keeping the demons at bay. She elects to take the highly unusual step of meeting with Adam in his hospital bed and finds him to be charming and articulate. The two even end up singing a duet together of a folk song based on a Yeats poem. But Fiona has a difficult decision to make; does the boy’s religious beliefs supersede medical facts? The children’s act, which places the welfare of the child as the paramount factor in any judicial decision in England, holds the key.

Thompson has long been one of my favorite actresses and even though this is one of the least approachable characters she has ever played, Thompson still imbues Fiona with humanity and intelligence. Her relationship with her husband is less symptomatic of her personality than her relationship with her clerk Nigel (Watkins). His obsequious nature is at odds with her blunt personality, and yet his devotion to her is absolute.

At the center of the film is the relationship between Fiona and Adam and that’s where the movie slips a little. Whitehead makes Adam almost too good to be true; it is only after Adam begins to feel more strongly towards the judge that Fiona begins to shy away which leads to an ending that is frankly a little maudlin which is definitely at odds with the rest of the film. Eyre and screenwriter McEwan (who adapted his own novel) have the courage to take on some thorny issues and handle them with equal attention to both sides of the coin. That’s a rarity in films today.

Even though the movie slips into preposterous mode near the end, it is still a smart, well-written drama that utilizes the talents of its star rather nicely. You don’t have to be familiar with the intricacies of British law in order to enjoy this one.