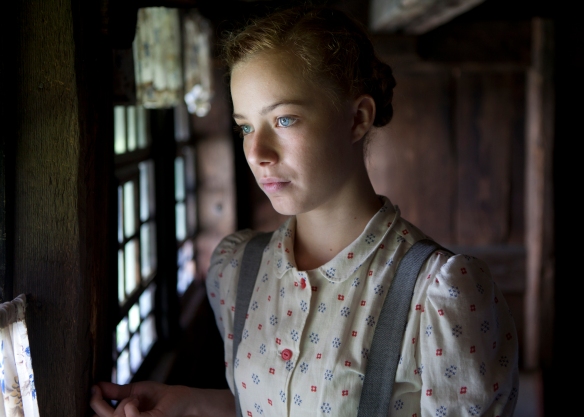 The Second World War left millions of refugees at its end, many traversing shattered lands as survivors tried to find some semblance of family, often with roughly the same odd of finding a needle in a haystack.

Lore (Rosendahl) is a beautiful young German girl just entering her mid-teens. Her parents are important people and they live in a beautiful home near Buchenwald. She has a younger sister, younger twin brothers and a baby brother. Life is good.

Except that this isn’t modern Germany but Nazi Germany and the war is grinding to a conclusion. Her father (Wagner) and mother (Lardi) are fleeing their home and headed to a rural cabin to hide, hoping for the best but fearing that if the Americans win the war that they’ll be arrested. In fact, that’s what actually happens. Alone, Lore knows she must take the children to her grandmother’s house 900km away. Without any choice, she hits the road.

Once there they are followed by a mysterious young man in black. Lore frets. At a schoolhouse where many have taken refuge, the American soldiers have posted pictures of the concentration camps. Lore is shocked at the horror depicted. Some disbelieve it completely – “they’re actors,” is the general thought. Lore knows better – one of the “actors” peering down at a pit of dead emaciated bodies is her father.

When Lore and the kids are stopped on the road by American soldiers demanding travel papers, she is terrified but the young man, who calls himself Thomas (Malina) and has the necessary papers (not to mention a Star of David identifying him as a concentration camp survivor) intervenes and gets them  a ride for at least part of the distance.

Lore is drawn into a love-hate relationship with Thomas. There’s no doubt that the kids love him and that he is looking out for them as he would his own family, but he is also everything her parents warned her against and was the object of their scorn and hatred. She doesn’t know what to think about him – nor of her own burgeoning sexuality which is beginning to emerge. It’s a long, long road to Hamburg and they’ll have to get through plenty of obstacles to get there.

This is a movie that looks at the other side and not necessarily with sympathy. Lore’s parents are monsters, and the more we see of them the more we realize that they had full knowledge of what was happening in regards to the Final Solution.

The problem I had is with Lore herself. One moment she’s sympathetic, the next intolerable, the following plucky, and the moment after that sensual. Her emotions are like a pachinko machine, bouncing from here to there without any real rhyme or reason. Part of that is endemic to being a hormonal teenage girl, another part is inconceivable stress. Either way, it makes it very difficult for an audience to identify with Lore.

That’s not necessarily Rosendahl’s fault. She seems to be a very capable young actress with a great deal of promise – she’s just given a character to play who isn’t an easy one to pull together and she does the very best she can. I’m not sure that any actress, even a Meryl Streep, could have pulled off this part any better.

Lore is beautifully photographed as we see pristine German woodlands and bucolic country villages which makes the heinous deeds we see even more wrenching. There are unburied bodies everywhere, some dead by their own hand. A misguided old woman who takes Lore’s family in temporarily wails at a portrait of Der Fuhrer “We let him down. He loved us all so.”  It’s disquieting to say the least.

These aren’t perfect kids and the world they inhabit is chaotic and unpredictable. There are no real rules and surviving is not an easy task – just procuring food isn’t a given. Survival isn’t a given. The baby give them a bit of an advantage and Lore knows it but she also realizes that she is becoming a woman and that can be an advantage with certain kinds of men.

Lore grows from being something of a spoiled brat at the beginning of the movie into a cynical woman who is in bare-bones survival mode. Her last actions in the film are of defiance and transformation as she realizes that what she has been through has changed her forever – nothing will ever be the same again. It’s a powerful message.

And yet I didn’t connect with the film the way I think I should have. Perhaps it’s the pacing which is very slow. Perhaps it is the emotional pinball machine that is Lore. Or perhaps it’s just the wrong day and the wrong time for me to see a movie like this. It certainly requires a good deal of commitment from the viewer. It’s a movie whose skill and technique I admire, and whose story I think is one that should be told. I just didn’t fall under its spell the way I would have liked.

REASONS TO STAY: Lore’s character is all over the map and gives us nothing to hold on to emotionally.

FAMILY VALUES:  There is some violence, some sexuality, a bit of foul language and some adult themes.

TRIVIAL PURSUIT: The family photographs in Thomas’ wallet actually belong to Shortland’s husband, who is of German Jewish descent and whose family fled Nazi Germany in 1936.

COMPARISON SHOPPING: The Way Back