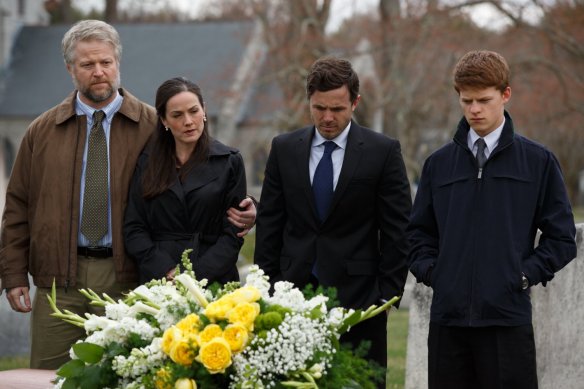 Grief is an emotion best shared.

Joseph Conrad famously wrote that “that which does not kill us makes us stronger” but like all aphorisms, it isn’t always true. There are some things, some horrible terrible things, that may not necessarily kill us but they destroy us emotionally, mentally and spiritually. They turn us into the living dead, unable to recover, unable to die.

Lee Chandler (Affleck) is someone like that. He works as a handyman/janitor in several apartment buildings in Quincy, Massachusetts, taken for granted and overlooked – and quite happy in that circumstance. He’s good at what he does, but when he gets guff from the tenants he tends to give it right back. He hangs out in bars, ignoring the come-ons of attractive women and then getting into meaningless bar fights, exploding over the slightest provocation.

His routine is disrupted with the news that his big brother Joe (Chandler) has died suddenly. Joe has had heart problems for years so it isn’t completely unexpected but it is still a devastating blow. Both brothers are divorced but Joe does have a son Patrick (Hedges) that lives with him since it turns out that his mom (Mol) is a raging alcoholic. Lee for whatever reason has been unable to forgive her for this. Lee goes back to Manchester-by-the-sea, a North Shore town where he grew up but he has left for good reason.

To Lee’s dismay, it turns out that Joe in his will named Lee as Patrick’s guardian. It also turns out that Joe has left enough money that will assist Lee in paying for things that Patrick will need. Lee has no intention of taking care of Patrick in Manchester – he wants Patrick to finish out the school year and then live with him in Quincy until he goes to college but Patrick balks. His whole life is there in Manchester – two girlfriends and a truly bad garage band – but he doesn’t want to start over, particularly with his Uncle who is taciturn, grim-faced and possessed of an explosive temper that gets him into trouble.

Lee’s ex-wife Randi (Williams) is seeing someone else but seems eager to re-connect with Lee, which Lee seems absolutely against. There are those in town who seem to have some sort of issue with Lee as well; most seem to shy away from him, as if he’s a bomb with a hair trigger. Bit by bit, we discover why Lee has these walls up…but can anything bring them down?

Most Hollywood movies dealing with a broken man (and Lee Chandler is most assuredly broken) who is forced unwillingly to become responsible for a child (although Patrick is 16 years old) usually end up with the broken man being fixed by the experience. Manchester by the Sea is a refreshing change from that trope as Lee is changed, but not fixed. The pain he is in is still there when the movie ends, and it is clear that pain will always be with him – and understandably so. What he has to live with is not something that people can just fix and forget.

Affleck, who in many ways has always been in the shadows of his brother Ben, has emerged with this performance. Oh sure, we always knew he could act – Gone Baby Gone and The Assassination of Jesse James by the Coward Robert Ford and several other examples are proof of that. Here though he is an odds on favorite to win the Best Actor Oscar and is a lock to get at least a nomination. This is the kind of performance that sears the soul of the viewer and stays there; it is a performance one can view again and again and still find something fresh and new about it. It is the step one takes from being a good actor to being a great one, and it is worth celebrating – we can always use great actors and Casey Affleck has become one.

Much of the movie is concerned with grief and how different people experience it. One point that Lonergan makes is that no matter how together someone seems on the surface, eventually that pain must manifest itself in some way or another, either through tears or walls or both. There are several scenes – a late film encounter between Lee and his ex, the moment when Patrick finally breaks down, the aftermath of a tragedy – that are as important as any you’ll see in a movie this year, or any other for that matter.

This is a movie firmly entrenched in working class values. Hollywood has a tendency to either mythologize those values, or condescend towards them. Lonergan does neither; he simply presents them as he sees them and allows the audience to draw their own conclusions. He doesn’t shy away from allowing people to think either; there are a lot of concepts here worthy of post-movie discussion and while it can be a hard movie to sit through, it is rewarding because of that reason. The subject matter is heavy and Lonergan refuses to take short cuts or dumb things down.

I know a lot of people mistrust Hollywood as a bastion of liberal elitism and there’s some justification for that. Those people who feel that way should see this movie. It is a celebration of life in the midst of pain and death. It doesn’t shy away from the realities of life but it doesn’t wallow in them either. It finds the quiet bravery of just getting up in the morning without making a fuss about it. In short, this is one of the best movies of 2016 and one which you should make every effort to see.

REASONS TO GO: A show-stopping performance by Casey Affleck is one of the best of the year. Grief is looked at in an honest and realistic way. The attitude is completely working class in a good way. This film doesn’t dumb itself down for its audience.
REASONS TO STAY: The pacing is a little bit on the slow side.
FAMILY VALUES: There is plenty of foul language, some sexual situations and adult themes.
TRIVIAL PURSUIT: The project was originally intended for Matt Damon to direct and star in, but conflicts with The Martian forced him to withdraw.
CRITICAL MASS: As of 12/29/16: Rotten Tomatoes: 97% positive reviews. Metacritic: 96/100.
COMPARISON SHOPPING: Angels Crest
FINAL RATING: 10/10
NEXT: Vacancy